Cities around the world are emerging from pandemic shutdowns and gradually allowing activities to resume. National leaders are keen to promote economic recovery, with appropriate public health precautions.

Recently, Chinese Premier Li Keqiang announced economic growth plans that included creating 9 million new jobs and reducing urban unemployment to less than 5.5%. One surprise was his emphasis on street vending. After decades of trying to clear city streets of vendors, the Chinese state is now embracing them as a new source of employment and economic growth.

I study urban policy and have researched the “informal economy” – activities that are not protected, regulated or often socially valued, including street vending. More than 2 billion people worldwide – over half the planet’s employed population – work in the informal economy, mainly in developing countries. In my view, encouraging street vending as part of COVID-19 recovery makes sense for many reasons.

Hawkers selling almost everything – food, books, household goods, clothes – used to be a common element of U.S. city life. The first pushcart in New York City appeared on Hester Street in 1886. By 1900 there were 25,000 pushcart vendors in the city selling everything from eyewear to mushrooms.

Street vending was a low-cost entry job for recent immigrants. It served as the vital first rung on the ladder of success and still performs this role in many U.S. cities.

But in New York and elsewhere, urban reformers viewed street vendors as nuisances and public health hazards, and tried to evict them or move them to marginal sites. Shopkeepers often complained of unwanted competition. The wealthy looked down on hawkers for being poor, foreign or both. As urban public spaces were regulated and configured to clear the streets of vendors, large-scale retail capitalism came to dominate the shopping experience.

Despite these challenges, street vending still thrives in many cities around the world.

For example, in a 2017 study I analyzed street vending in Cali, Colombia with scholar Lina Martinez. We found a sophisticated operation with multiple levels. They ranged from a well-established sector in the busy downtown, with better working conditions and relatively high incomes, to less-accessible markets that provided a gateway opportunity for the poor and recent rural migrants. We also unearthed significant flows of money, and discovered that street vending often provided higher wages than the formal economy.

Recently, however, many nations have embraced street commerce as a way to reduce poverty and boost marginal groups, especially poor women from ethnic and racial minorities. As one example, since 2003 it has been illegal to remove street vendors from public spaces in Colombia without offering them compensation or guaranteed participation in income-support programs.

Nor did street vending disappear entirely from cities in wealthy countries. It survived in traditional flea markets and farmer’s markets. These lively urban spaces are now augmented by the motorized version of vendor’s street food: food trucks.

Building on food trucks’ success, more cities now are seeking to promote street vending. Advocates in New York City have campaigned since 2016 to increase the number of permits and licenses for street vending, which has been tightly limited since the early 1980s. And street food has become a tourist draw across the U.S.

Street vending during a pandemic

In my view, street vending offers many pluses for cities restarting after COVID-19 shutdowns. First, it can blunt some of the economic pain of the pandemic. Second, it can be configured to encourage social distancing more easily than the internal spaces of crowded shopping malls. Third, many cities are already being reconfigured and reimagined through steps such as widening sidewalks and creating traffic-free streets. These actions create more opportunities for street commerce.

Initial U.S. economic stimulus measures favored big business and the well-connected. Grants, training programs and low-interest loans, designed to help more street vendors get established, would steer support to Americans who are less wealthy and more ethnically diverse. Encouraging this kind of entrepreneurship, with its low entry cost, is a small but significantly more equitable way to stimulate the economy.

COVID-19 has forced us to rethink city living. I believe we should take the opportunity to reimagine a livelier, more interesting and more equitable post-pandemic city. 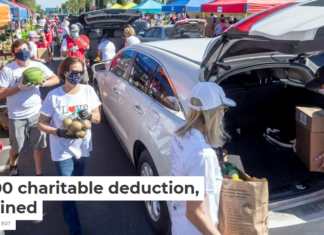 Inflation might well keep rising in 2021 – but what happens...