Wales has become the latest country to explore the idea of a universal basic income, which gives every adult a fixed amount of money, regardless of their employment status. Announcing plans for a pilot scheme was a bold move by the first minister, Mark Drakeford, who said he has a “longstanding interest” in the idea. And he is not alone.

In Wales, a survey showed 69% of people supported a trial, and a letter asking the British government to consider similar plans was signed by over 500 cross-party politicians from across the UK. Already, 32 local councils across the country have voted in favour of a pilot in their areas.

Since COVID-19, there has been a global surge in support too. In the USA, Los Angeles has become the latest city to launch an experiment, and there have been trials in Canada, South Korea and Kenya. In Europe, a poll last year, covering France, Germany, Italy, Poland, Portugal and Spain, found that more than two-thirds of people were in favour of a basic income.

Of course, there are sceptics. The Conservatives reacted to the Drakeford’s announcement by saying Wales should not become “a petri dish for failed left-wing policies”. But there is nothing especially left-wing about providing everybody with a basic income – it is a matter of common justice that would enhance freedom and provide basic security for all.

Paying every individual a modest weekly amount, with supplements for those with special needs, would be easier and less expensive than trying to identify “the poor”. And there is nothing in the concept to suggest it should replace other benefits, so no reason to claim it would increase poverty.

Nor can critics legitimately claim that basic income pilot has failed. My recent books have summarised evidence from more than 20 pilots, in rich and poor countries. None have failed. On the contrary; even though the methodology, sample sizes and durations have varied, the outcomes have been remarkably consistent.

The most common result is better mental and physical health. There are also clear improvements in nutrition, school performance, productivity, and status of women and those with disabilities. There have also been increases in work – not reductions, as critics claim there would be. https://www.youtube.com/embed/O8B4U7o9kvg?wmode=transparent&start=0

One well known pilot was conducted in Finland over two years from the beginning of 2017 until the end of 2018, and resulted in better health and slightly more work for the 2,000 randomly selected unemployed people it was given to.

My research indicates that these benefits would be far greater if the trial income had been given to a whole community, where it would bring more cooperation and greater impact on the local economy. Hopefully in Wales and elsewhere, pilots will be community based.

A matter of justice

The most common criticisms are that a basic income is unaffordable. But there are several ways by which it could be paid without steep rises in income tax – such as reducing the amount spent on tax relief for wealthy companies and individuals. Or, had the £375 billion spent by the Bank of England on quantitative easing after the financial crash of 2007-08 been spent on basic incomes, everybody in the country could have received £50 a week for two years.

This leads to the ethical justification for a basic income. It is a matter of common justice, while enhancing freedom and providing basic security, which is a human need and a public good.

As a matter of justice, we should acknowledge that the income of all of us is far more due to the efforts of the many generations before us than anything we ourselves do. Even billionaire Warren Buffett knows that, acknowledging the benefits given to us by our ancestors, when he said: “I personally think that society is responsible for a very significant portion of what I’ve earned.”

If we allow private inheritance, then we could see basic income as a dividend on inherited public wealth created by our ancestors, paid equally because we cannot know whose ancestors contributed more or less. Critics who claim it is “something for nothing” and reduces the incentive to work, should logically oppose private inheritance for the same reasons.

The pandemic has surely taught us that the resilience of all (and of the economy) depends on the resilience of the most vulnerable. The only way to ensure robustness and resilience is to have guaranteed protection – with a basic income providing an anchor of certainty and security. 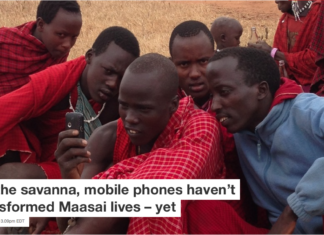 Staff Writer - July 3, 2017
Timothy D. Baird, Virginia Tech Mobile phones are everywhere. In fact, they may be nearly as common on the African savanna as they are on...