As the effects of climate change become more apparent and widespread, it’s easy to feel that our species is the biggest threat to life on Earth. Indeed, one recent study warned that extreme environmental change could cause an “extinction domino effect,” in which one species dies out, then another species that depends on it, and so on.

When headlines like this seem overwhelming, I remind myself that scholars are still learning about all kinds of amazing life forms. Here are three 2018 stories that remind us how awesome the animal world is.

If Americans have even heard of fossa (Cryptoprocta ferox), a catlike carnivore found only on Madagascar, it’s usually from the animated Madagascar movies. Fossa are the island’s real-life apex predator, but are so rare and hard to track that scientists know very little about them – even how many there are.

Penn State University doctoral candidate Asia Murphy was part of a seven-year project that documented fossa numbers with camera traps. By focusing on features like scars, ear nicks, and tail width and kinkiness, scientists could pick out certain fossa from the population and “follow” them from one camera to another. Their survey data and population density estimates will support habitat protection efforts.

“In all of this time, I never personally saw a fossa, but two local field assistants saw fossa in the trees once or twice,” Murphy writes. She’d like to see these animals get more attention from the conservation world, and suggests that it’s time for #FossaFriday.

2. Forests at the bottom of the sea

Scientists go to many extremes to find life forms. In August, a research expedition off the coast of South Carolina found a huge series of coldwater coral “forests,” covering about 85 miles, in water more than three miles deep.

Coldwater corals “are just as ecologically important as their shallow water counterparts,” writes Florida State University research scientist Sandra Brooke, who was on the cruise and went down in the Alvin submersible to see coral formations on the ocean floor.

Unlike shallow-water corals, which get much of their energy from sunlight, deepwater corals feed on organic material and zooplankton that drift to them on ocean currents. They grow extremely slowly: One black coral is estimated to be more than 4,200 years old. Industrial fishing, offshore drilling and seabed mining could damage deepsea reefs before they’re even mapped – all the more reason, Brooke asserts, to get out and find them now.

In recent years a chytrid pathogen abbreviated as Bd has caused mass dieoffs of frog populations around the world. But in a study published in March 2018, Vanderbilt University biologist Louise Rollins-Smith and others reported that some tropical frogs in Panama appeared to be developing improved skin defenses against Bd – big news for amphibian researchers.

“Many amphibians have granular glands in their skin that synthesize and sequester antimicrobial peptides and other defensive molecules,” Rollins-Smith explains. “When the animal is alarmed or injured, the defensive molecules are released to cleanse and protect the skin.” Scientists don’t know how, but these defenses seemed to improve after Bd entered some frog communities.

Alarmingly, a second chytrid fungus, abbreviated as Bsal, has emerged in Europe and is thought to seriously threaten salamanders. Scholars are urging the U.S. government to suspend all imports of frogs and salamanders until this new threat is better understood. Yet more reason to keep learning about wild species, seen and unseen, all around us. 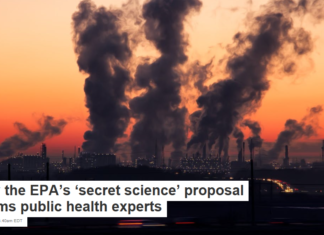 Staff Writer - May 19, 2018
Bernard Goldstein, University of Pittsburgh Later this month, the EPA could finalize a controversial rule to limit what scientific research the agency can use in...