The chaos at the U.S. Capitol on Wednesday wasn’t typical. Nor was the coverage.

Footage carried live by cable news and clips and photos shared across social media were jolting. One image showed a man who had broken into the building sitting in a chair, foot on desk, in House Speaker Nancy Pelosi’s office. A video clip showed a crowd chasing a police officer as he retreated up the stairs.

As a researcher of media and social movements, I was absorbed by the violent events that unfolded. My research on protests shows that how the media portrays unrest – as riot or resistance, for example – helps shape the public’s view of the protest’s aims. Typically news coverage pays more attention to disruptive tactics than to the aims of protesters, especially when it comes to anti-Black racism protests or action that radically challenges the status quo.

By focusing on the disruption while underreporting the protest’s substance, agendas and goals, coverage contributes to a “hierarchy of social struggle” in which the voices of some advocacy groups are lifted over others.

But this was different. News audiences aren’t necessarily used to seeing violence and disruption at citizen demonstrations in support of a president – and certainly not on the scale we witnessed on Wednesday at the Capitol. It proved a novel test of how the news media would frame the unrest and the aims of those involved.

Traditional news media have come under heavy criticism for their coverage of civil rights protests, most recently after the death of George Floyd. A study of demonstrations between 1967 and 2007 concluded that protests were often framed as public nuisances, especially when those doing the protesting were ideologically liberal. Conservative protests were less likely to be seen as nuisances. And my research has highlighted the tendency to frame anti-Black racism protests as “riots” more than other protests.

But much of the coverage of events at the Capitol stripped euphemistic labels like “protests,” “rallies” and “demonstrations” from their description of what was going on.

Instead news media labeled the event as a “siege” or “insurrection” carried out by a “mob.”

It is also notable that at least one major network, CNN, described the events as “terrorism” – a term still more common in descriptions of Muslims and people of color than white supremacists.

In my work, I call for journalists to balance their attention to protester actions with the reasons and grievances that brought the demonstrator out onto the streets in the first place – and reflect this in their reporting. This balance usually skews toward the actions, especially when those actions involve violence or damage to property or when there are confrontations with police.

Despite the escalation of events from protest to insurrection, the initial coverage Wednesday seemed to include the grievances of those taking part.

Coverage also focused on police behavior, but it appeared more concerned with the lack of policing. Police didn’t show up in riot gear or wielding batons as Trump supporters ascended the Capitol steps. There were no tanks, or large-caliber rifles on display as protesters arrived.

This too was different from other protests. Many have commented on social media that if these had been Black Lives Matter protesters, there might have been a very different outcome – the assumption being Trump-sponsored insurrections are treated differently by authorities.

Some news media outlets, such as USAToday, made this comparative difference clear in their reporting. This is not a typical narrative in mainstream protest news coverage.

Even the initial news coverage by Fox News seemed largely in line with the framing of other news channels, until the evening, when commentary from the “Tucker Carlson Tonight” show shifted the network’s narrative.

Carlson’s monologue on Wednesday evening half-addressed the siege, but asked the audience to consider why people like Ashli Babbitt, the woman shot and killed during the break-in, attended the rally in the first place. Detailing her tragic death, Tucker said, “She bore no resemblance to the angry children we have seen wrecking our cities in recent months.” Carlson used this to transition to his critique of liberal leaders and the election results.

Some may dismiss Carlson’s comments as irrelevant and radical. However, his framing provides insight about how the right-wing media has sought to portray certain protests in recent years, and the consequences of that action.

My colleague from Michigan State University Rachel Mourão and I have used panel survey data from 2015 and 2016 to explore attitudes about protests in general and Black Lives Matter’s core grievances specifically. The results showed that increased consumption of news from right-wing organizations like Fox and Breitbart didn’t really affect people’s views about protests generally. But it did strongly correlate with more negative opinions about some of the core grievances and demands connected with Black Lives Matter.

More evidence lies in other popular right-wing media. Their framing doesn’t accentuate the unrest’s violent actions carried out by an angry mob at all.

Less than 24 hours after the siege, the homepage of right-wing outlet One America News Network’s (OAN) website was devoid of any pictures of protests. Meanwhile, Breitbart had a Mark Zuckerberg image front and center. That article described how Facebook had “blacklisted” Trump after the “events” on Capitol Hill.

Right-wing media not only distort the realities of the insurrection, they undermine and erase the impact of such undemocratic actions. Out of sight, out of mind.

These are starkly different realities from the websites of news outlets such as ABC, NBC, CBS and CNN, as well as newspaper front pages – both online and in print – from around the country.

In recent months, some news organizations have vowed to address shortcomings in their coverage, including how reporters cover protests. If the unrest that followed the police killing of George Floyd was the event that triggered a welcomed media reckoning, then the insurrection at the Capitol could be the event that helps outlets better understand why framing is important. 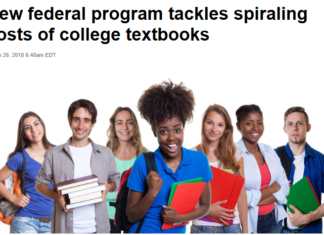 Staff Writer - March 26, 2018
MacKenzie Smith, University of California, Davis College students will keep more money in their pockets thanks to a new US$5 million pilot program approved as...

Look at 3 enduring stories Americans tell about guns to understand...