The recent toppling of a string of powerful figures for sexual abuse and harassment raises the question of how these people managed to conceal their behavior so long, in some instances after abusing hundreds of victims.

Why didn’t the victims speak up? And why, when they did, was justice so slow?

Clearly, there’s a powerful human instinct to ignore or cover-up allegations of this sort, whether they appear in politics, entertainment, sports, academia or media.

Thomas Eakins is one of the most revered 19th-century American artists. His brooding portraits seem to strip his sitters of all pretension, revealing an inner vulnerability. New York Times art critic Michael Kimmelman described Eakins’ huge rendering of a grisly medical operation, “The Gross Clinic,” as “hands down, the finest 19th-century American painting.”

But over the last few decades, enough evidence has emerged to suggest that Eakins was a sexual predator. Not only did he cross a number of lines with his subjects and students, but a disturbing pattern of alleged abuse has also emerged. Curiously, the very group that one would have expected to speak up – feminist art historians – have been notably silent.

How should this sort of information be dealt with when it emerges? What’s behind the urge to suppress it? And how should it color our view of an artist?

The son of a Philadelphia instructor in penmanship and calligraphy, Eakins went on to study art in Paris. Upon returning to his hometown in 1870, he rose quickly to a position of local eminence. In 1882, at the age of 38, he was appointed director of the art school of the Pennsylvania Academy of Fine Arts.

In 1886, however, he was abruptly fired from the Pennsylvania Academy with no public explanation. He then spent the rest of his life as an outcast from proper Philadelphia society. He’d gift portraits to his sitters, who would routinely destroy them. Critics derided his art as ugly and depressing.

But at the turn of the century, a dramatic shift occurred. Painters such as society portraitist John Singer Sargent came to be viewed as superficial and dishonest, while Eakins was seen as a paragon of the authentic. The first biography of Eakins, published in 1933 by art historian Lloyd Goodrich, depicted him as an exemplar of sober honesty and moral probity.

For more than half century, Goodrich’s monograph remained the primary source on Eakins for a curious reason. Shortly after the biography came out, the documents Goodrich had drawn on disappeared and were presumed destroyed. This meant that in subsequent books, Goodrich’s account needed to be used as the authoritative source.

In 1985, however, Eakins’ papers were rediscovered among the effects of his pupil Charles Bregler and shortly thereafter became fully accessible to scholars. In addition, after Goodrich died in 1987, his notes from interviews with people who had known Eakins became available. They included a great deal of material he had excluded from his published account.

While some cracks in Goodrich’s account had come to light earlier, the Bregler Papers and Goodrich’s notes made it clear that nearly everything about Eakins’ life and art needed a major reassessment.

A disturbing pattern of behavior emerges

Loosely speaking, the accusations against Eakins fit into two categories.

The first involves nudity. Eakins seems to have been an exhibitionist voyeur – someone who exposes themselves in unlikely or inappropriate situations to shock others and perhaps achieve some sort of psychological dominance.

He often undressed in front of his students or inappropriately exposed himself in front of his subjects. For example, according to his student Samuel Murray, he once walked completely naked into a room where a young woman was posing for her portrait and declared, “I don’t know if you ever saw a naked man before. I thought you might like to see one.”

Goodrich’s unpublished notes detail repeated instances in which he pressured women to undress in front of him, from his young female students to the elderly women who posed for his portraits.

He collected a large number of nude photographs of himself and his students, and he had photographs taken in which he is carrying a naked female model while unclothed. In his classes he often used obscene language, told dirty jokes, and spoke at great length about the male genitals in anatomical dissections.

The second deals with episodes that are much more troubling and bizarre.

The most disturbing involves Eakins’ niece Ella Crowell. In 1897, she committed suicide with a shotgun. The Bregler Papers revealed that she had once accused Eakins of sexually molesting her and that Ella’s parents believed her account.

The papers disclosed another troubling series of events. One of Eakins’ students, Lillian Hammitt, was picked up by the police on the streets of Philadelphia wearing a bathing suit and claiming that Eakins had promised to marry her. In 1886, Eakins’ brother-in-law, Charles Stephens, accused him of incest with his sister Margaret, who had died a few years before. Eakins’ sister Caroline also reported that he would repeatedly enter her bedroom wearing a shirt but no pants. Once, when she fled to a more distant part of the house to escape him, he shot and killed her cat.

By the end of his life, Eakins wasn’t on speaking terms with any of his siblings. Another brother-in-law, Will Crowell, admitted in a letter that he had threatened to kill Eakins.

While Eakins disparaged those who attacked him, he was a little like someone who starts a fight in a bar and then ducks out the back door. He consistently avoided specifically addressing the charges against him. Instead, he let his students, associates and family members engage in arguments about his behavior.

The belief that Eakins engaged in some form of sexual abuse is not based on conjecture but on large numbers of concrete accusations made in his lifetime.

What’s striking, however, is the persistent avoidance of these issues.

This material is still left out – surely deliberately left out – of most standard sources on American art. No textbook breathes a word on the subject. Even the Wikipedia article on Eakins systematically omits his sexual transgressions.

How can we explain this?

One possible explanation is simply that issues like sexual abuse are highly disturbing. They make one queasy. Moral issues like theft are not hard to think about in a logical way. With incest and sexual abuse, a more primitive instinct of avoidance seems to come to the fore.

Another possible explanation is that people often have trouble admitting that they were wrong. During the period before the discovery of the Bregler Papers, effusive praise of Eakins was expected of scholars in the American field, and a great many women and men engaged in it.

In 1983, for example, art historian Elizabeth Johns won the Mitchell Prize for a book celebrating Eakins as a moral, disciplined, self-made man. Though this was written before the Bregler Papers were discovered, she has never publicly changed her stance.

Even Linda Nochlin, a major figure in feminist art history, wrote an essay praising the way Eakins pictured women who look abused and declared that she felt he would have been sympathetic to her as a Jewish girl at Vassar. Sadly, this was unlikely. According to Weda Cook, a sitter for one of Eakins’ most famous portraits, the painter “didn’t like Jews.” He was also a friend and ally of the reactionary arts administrator Harrison Morris, who believed that modern art was a conspiracy of Jewish artists and art dealers.

In the past, I’ve written about Eakins’ pattern of sexual misconduct. One surprise has been the hostility of many female art historians to this criticism.

Why does it matter? Ella Crowell has been dead for more than a century. Why should we care if she was sexually abused?

My own feeling is that there’s a moral dimension to this question – that presenting a sexual predator as a moral paragon is unhealthy and that to do so twists our moral values.

But I would also argue for a somewhat different position. When we deal with contemporary events, it’s easy for a sort of witch-hunt mentality to take over. With an artist long dead, we can maintain a more dispassionate approach and search for understanding the mechanisms of unhealthy behavior.

While we can recognize that Eakins was a sexual predator, we can also point to another long-suppressed fact of Eakins’ life: His mother suffered from bipolar disorder throughout his childhood and died of “mania” shortly after he returned from Paris. As a child, Eakins had spent long periods with his mother and was charged with caring for her while his father worked.

Bipolar illness has a strong hereditary component, and we know that Eakins himself sought medical help for depression. Surely, spending long periods with a mentally ill woman must have been traumatic.

Finally, there’s the issue of Eakins’ paintings, which are widely regarded as one of the great achievements of American art. No American painter made works that are so extensively autobiographical, and so much a portrait of himself, his family and his intimate circle.

If we’re going to grasp what makes these paintings so tragically powerful, we should be honest and open in examining the man who made them and the impulses that drove him. 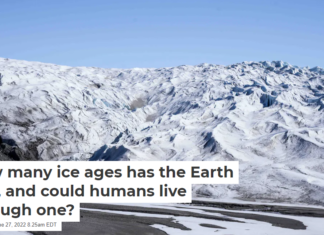 How many ice ages has the Earth had, and could humans...

What is personalized learning and why is it so controversial? 5...

AI makes huge progress predicting how proteins fold – one of...