The Prime Minister’s Prizes for Science – awarded at Parliament House in Canberra tonight – recognise excellence in science and science teaching. This year, we asked four prizewinners to reflect on their work and factors that influenced their careers. The Malcolm McIntosh Prize for Physical Scientist of the Year, Dr Matthew Hill from CSIRO, takes us through his work in metal organic frameworks.

Looking back, a career in science was always on the cards. When I was about four, for behaving myself I wanted to be allowed to add lots of numbers up. Growing up in Western Sydney, we didn’t have much, and a long university degree didn’t really match the budget.

What made the difference was my mother deciding that my sister and I were going to university no matter what, even though no one in our family had gone before.

As I headed to university, I thought I’d be a mathematician, but it turned out I just wasn’t quite good enough. I also really enjoyed chemistry, so I got into a labcoat.

My PhD at UNSW with Rob Lamb got me fired up about linking fundamental chemistry to an applied problem – what I was working on could one day be useful outside the lab.

When I joined CSIRO, Anita Hill had a great thing going with porous materials – we were interested in anything with lots of holes in it. It made sense to work with what had the most holes – that was the best way to break new ground.

Metal organic frameworks, or MOFs, are metal atoms joined to each other by organic linkers. When the chemistry is right, they form a structure that looks like a building scaffold. From the outside, they look like a sugar or salt crystal, but inside, every atom in the structure is exposed to empty space, meaning that up to 80% of the crystal is empty – made up of nothing.

All of those atoms inside the structure exposed to empty space make for a huge amount of surface. Many MOFs have over 5,000 square metres of surface area per gram – like having a soccer field inside a teaspoon worth of powder.

First off I was inspired by chemists such as Richard Robson and Jeff Long who had shown you could use all this surface like a sponge.

For example, it is possible to soak up natural gas into a MOF. If you put this powder into a tank, it turns out you can store many times more gas in the same place as if you compressed it – the sponge effect is that strong. So, a car powered by natural gas, which could be cheaper and cleaner, could carry enough gas to drive as far as a petrol one.

My team and I designed MOFs to store huge amounts of hydrogen and natural gas fuel, and to capture carbon dioxide in massive quantities as well.

We even made a MOF sponge that could wring itself out when exposed to the sun. Most of the energy used for capturing carbon dioxide goes to regenerating your capture material, so using sunlight is an attractive alternative.

The other thing about MOFs is that the holes are all the same size. Like a flour sieve, the holes can separate big from small. I was interested but didn’t know much about this, so I was lucky that Rich Noble at University of Colorado Boulder let me visit for a while to learn.

We thought that adding these MOF powders to polymer membranes – thin plastic sheets – would help one gas to pass through faster than another. It’s the best way to get natural gas, oxygen or water ready for us to use.

Sure enough, we saw an improvement, but we also stumbled upon an even more exciting effect. These plastic sheets don’t last very long, collapsing down on themselves – they age. After a few weeks the gases don’t go through very fast any more.

We found that one specific MOF seemed to form a special mixture, propping the sheets open, making them last for years instead of weeks. Today we are developing these anti-ageing membranes for a platform of applications, from defence to agriculture and energy.

When I first started, making a teaspoon of a MOF was a major undertaking. We knew that they would never be useful unless large amounts could be made efficiently.

This is the future of chemical synthesis because reactions happen faster and cleaner, and it was a game changer for MOFs.

Now we can make MOFs for a myriad of uses, but also have enough of them to make it worthwhile.

Further reading:
The genetics of epilepsy: bringing hope to families
Epigenetic code cracker: why skin cells are skin cells and not neurons 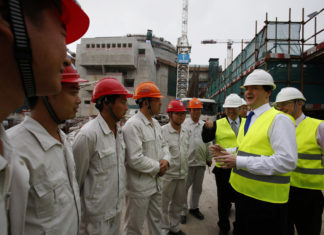 Pants or no pants? Tips for virtual job interviews from home

Investing in people not tools: how to fulfill the promise of...