President Donald Trump and GOP leaders just released a plan to significantly change the taxation of individuals and businesses in what would be the biggest overhaul of the tax code in decades.

Among its many elements is a proposal to change the way the government taxes so-called pass-through entities, something first suggested in April.

In a nutshell, the Trump proposal would dramatically lower the rates this category of filers pays. While the cut would not be as large as first proposed, it would still lead to very creative tax planning at best and outright evasion at worst, while prompting more companies to adopt this type of business structure to gain the huge benefits.

More fundamentally, we argue, this would cause faith in the fairness of the tax system – a cornerstone of our voluntary method of taxation – to falter. The consequences of that could be dire.

The universe of pass-throughs is very large, including anything from freelancers and corner grocery stores to medical partnerships and hedge funds that file under legal categories like sole proprietorships, partnerships and S corporations.

The name “pass-through” refers to how income “passes through” to owners. Pass-throughs avoid the double taxation that hits regular C corporations. More of U.S. business income is actually generated by pass-through entities than conventional corporations like Apple and General Electric.

Currently, owners of pass-throughs report both compensation and business income on their personal tax returns and pay the same tax rates on both.

To illustrate how this works, imagine a doctor’s sole proprietorship generates US$1 million of taxable earnings. Let’s say half of that would be considered reasonable compensation for the owner’s work, while the other half would be deemed ordinary business income. On her tax return, the doctor would report an income of $1 million, all of which would be taxed at personal income tax rates, for a federal levy of $396,000 (assuming a flat rate of 39.6 percent).

Under Trump’s proposal, the tax rates on compensation and business income would no longer be the same. A new top rate of 35 percent would apply to compensation, and a proposed rate of 25 percent would apply to business income (the original proposal targeted 15 percent). Going back to our example, the doctor’s federal tax bill would be reduced to about $300,000, assuming she followed the rules. Not bad.

Clearly, the potential tax savings are huge. Many owners of pass-throughs are going to be tempted to report reasonable compensation as business income.

And who wouldn’t be? The reward for cheating is just too large. And the likelihood of getting away with cheating is as high as it’s ever been because of the reductions in enforcement in recent years, a trend Trump has shown no intention of reversing.

The history of taxation bears this out: If taxpayers are given flexibility in how to report their income, many will do what they can to lower their tax as much as possible.

This clearly creates a strong incentive to characterize as much “compensation” as possible as regular business income. The challenge for the Internal Revenue Service has been defining what constitutes “reasonable compensation” for S corporation shareholders.

The issue has been well-litigated over the years, resulting in a 2012 circuit court ruling that was deemed a win for tax evaders. The court’s guidance boiled down to saying each case is unique and offered no ready recipe for the income allocation problem.

What happened in Kansas

The state of Kansas offers a ready example of what happens when you change how pass-throughs are taxed.

In 2012, Kansas eliminated its income tax on pass-through companies, whose owners previously had to report any earnings on their personal state returns. The response to this change, which took effect in 2013, was quick and large.

The center-right Tax Foundation estimated that it caused the number of pass-through companies in the state to double and resulted in $589 million in lost revenue in 2015 alone, based on an analysis of Kansas tax expenditure reports. A recent paper examining the impact of the change concluded it resulted in “overwhelmingly” more tax avoidance. Kansas abandoned this experiment earlier this year.

The reasonable inference from the S corporation history and Kansas’ experiment is what everyone is taught in their first economics class: People are rational and self-interested. They recognize and exploit opportunities to enrich themselves.

And the Trump administration’s proposed changes to pass-through rules would create a huge opportunity and greater incentives to recharacterize income.

A blow against fairness

Just as worrisome as the significant loss in revenue, however, is that Trump’s proposed change and the potential evasion could undermine the perceived fairness of the tax system.

An April CBS News poll found that 56 percent of Americans think the income tax system is “somewhat” or “quite” unfair. And a 2011 Pew survey noted that 57 percent of respondents said their biggest complaint about the system is that the wealthy don’t pay their fair share.

Trump’s tax proposal would likely worsen the problem as more people try to game the system. Research suggests that this would create a growing perception of structural unfairness and lead more taxpayers to collectively challenge the system. If that happens, our tax system’s effectiveness would decline, and the consequences of that could be devastating.

Back in 2016, Trump said “hedge fund guys are getting away with murder” because of their use of the “carried interest loophole,” which allows them to significantly lower the taxes they pay.

Trump’s pass-through proposal amounts to encouraging more companies to do exactly the same thing. In our view, this is the manifestation of unfairness.

This is an updated version of an article originally published on May 1, 2017. Tim Gray, a freelance business writer and editor, co-authored the original piece. 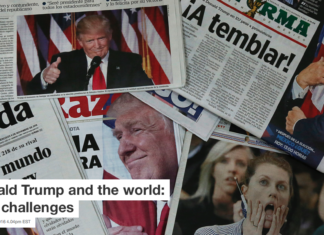 Staff Writer - November 9, 2016
Simon Reich, Rutgers University Newark The election is finally over. It has resulted in the most stunning political upset in the modern era. But that...

How coronavirus threatens the seasonal farmworkers at the heart of the...