It’s easy, in retrospect, to portray World War II as a major turning point in the history of medical ethics. But it’s a portrayal we should resist because it blinds us to the troubles that persist to this day in matters of informed consent.

When Germany surrendered in May 1945, the victors’ worst fears were confirmed: the Nazis had committed innumerable and horrific war crimes, including the attempt to annihilate the Jewish people. So severe were the depredations of Hitler and his henchmen and women that new words were invented to describe their actions: genocide (the obliteration of an entire people) and thanatology (the science of producing death).

As the extermination camps in Poland and the concentration camps in Germany were liberated, the scale of human destruction wrought by Nazi ideology both confounded and shocked. But, in their efforts to reap the benefits of Nazi scientific research, intelligence officers rapidly discovered the devastation of human medical experimentation.

Jews, political prisoners and other “undesirables” were subjected to a range of experiments that resulted in death and disability. The Luftwaffe, for instance, wished to know how to protect and revive pilots shot down in the sea who suffered from hypothermia. The Nazi solution was to immerse experimental subjects in freezing water to the point of death and beyond.

Following the assassination of high-ranking Nazi Reinhard Heydrich, a cry went out to experiment more boldly with sulphanomides (drugs that curb the growth of bacteria) since Heydrich had died of wound infection. The solution: scarify the legs of experimental subjects, infect the wounds and see what happens with or without drugs.

These examples are the tip of the iceberg. Experiments with transplants, bacteria, gases and other chemical agents were carried out on thousands of hapless prisoners. Worst of all was the T4 programme, which paved the way for the destruction of all “life unworthy of life” between 1939 and 1941. Thousands of disabled and mentally ill people were “euthanased” using a variety of techniques including mass gassing, a method that was later transferred to the extermination camps.

As part of trying to find out how Germany, one of the most scientifically sophisticated and humanistic cultures had become so perverted, a military tribunal was established as a corollary to the 13 Nuremberg trials. And between December 1946 and August 1947, 23 medical doctors were tried for war crimes and crimes against humanity.

But the most interesting was the final defence, which claimed what the Nazi doctors had done was little different from experiments carried out by the allies on their own prison populations, inmates of mental asylums, conscientious objectors and troops.

This final point was undeniable: in both the United States and Britain, experiments had been carried out on vulnerable groups. In 1941, for instance, patients at a Michigan state mental hospital were deliberately infected with the influenza virus. And in the early 1940s, predominantly African-American prisoners at the Statesville Penitentiary were deliberately infected with malaria.

These are only two of the many experiments carried out on vulnerable populations; people who could not be said to have the freedom to consent.

It was apparent a general code of ethics developing standards for informed consent in human research needed to come out of the trial so the judges formulated the Nuremberg Code as part of their judgement. They used the work of Andrew Ivy, the American Medical Association representative, and psychiatrist and neurologist Leo Alexander who was appointed to the prosecution team, both of whom had supplied the trial with their own ethical codes.

The code is generally regarded as the foundation of the World Medical Association’s Helsinki Declaration (1964), which has become the bedrock of ethical standards for human experimentation and informed consent. But the story doesn’t have as happy an ending as all this would suggest.

Despite the impact of the Nazi doctors’ trial and the promulgation of the new code of ethics, neither the United States nor its European allies, adhered to the code until a series of scandals suggested the need for a closer look at how medicine was conducting itself.

The existence of the code was not enough to halt the Tuskegee syphilis study in which 400 African-American men were deliberately infected with syphilis and observed even though treatment was available within 15 years of the 40-year experiment. Or to prevent the Guatemala syphilis experiments, which involved about 1,500 children, prisoners, soldiers, sex workers and psychiatric patients.

Neither did it impact the deliberate exposure of military personnel and civilians [to radioactive fallout from atomic testing] (http://www.carnegiecouncil.org/publications/ethics_online/0032.html). Or the testing of nerve agents and other chemicals on conscripts at Porton Down in the United Kingdom. Clearly, the dictats of the Cold War overrode the post-Nuremberg ethical regime.

And when the Helsinki Declaration was finally released, key principals of the Nuremberg Code and its tight legal language had been watered down, giving more leeway to those conducting human experiments. Still, we are considerably better off today because of it, and should not forget the price that was paid for the institution of an effective ethics regime.

Perhaps there was a pragmatism in the actions of the United States that undermined their insistence on the prosecution of Nazi medical war crimes. In the Asian theatre of the war, the scale of human medical experimentation carried out by Japan’s Unit 731 was also staggering and brutal.

Hundreds of thousands of lives are thought to have been lost to experiments that tested germ and chemical weapons. But not a single Japanese medical practitioner was held accountable for his actions.

Had the defendants at the Nuremberg doctors’ trial known this, the force of their third, tu quoque (appeal to hypocrisy) defence would have been immeasurably strengthened. As it was, the disparity between Japan and Germany might explain why, at most, only lip service was paid to the Nuremberg Code. It might also explain how it was that the code became diluted in the Helsinki Declaration.

The judges and the prosecutors at Nuremberg were fully aware of the high stakes. But the implementation of their ethical vision required a political will that was sadly lacking.

Click here to read more articles in The Conversation’s series On Human Experiments.

James Bradley is Lecturer in History of Medicine/Life Science at University of Melbourne. 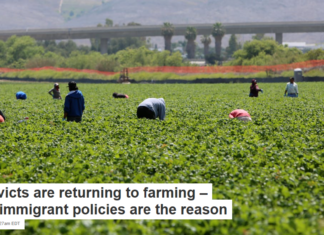 Convicts are returning to farming – anti-immigrant policies are the reason