During a flashback scene in Marvel’s Disney Plus show “WandaVision,” the superpowered android Vision comforts his wife, Wanda Maximoff, after the death of her twin brother. “But what is grief,” he tells her, “if not love persevering?”

The line has become famous among Marvel fans and inspired an internet meme. But it also neatly summarizes the events of the show. Later, distraught over Vision’s death after battling the villain Thanos, Wanda uses her magic powers to bring a version of him back to life. He becomes her husband in a sitcom fantasy world of her own creation. In order to establish this dream world, Wanda pulls an entire town of people into her magic bubble to play roles of her choosing.

The success of “WandaVision” continues Marvel’s impressive record. But besides extending the studio’s string of box office hits into television, “WandaVision” also continues another familiar pattern from Marvel: echoing much older stories from world mythologies.

As I show in my recent book, “Religion and Myth in the Marvel Cinematic Universe,” examples of that pattern are not hard to find.

The origin stories where Marvel heroes discover their powers often resemble initiation rituals found around the world. In those rituals, the hero often dies – literally or symbolically – and achieves a new status upon coming back to life.

For instance, it shows up frequently in stories of shamans from around the globe, where individuals grow very sick or even briefly die, then return with supernatural powers. Similarly, Iron Man, Thor, Captain America and Black Panther all gain their powers after near-death experiences.

In some cases, as when the Avengers battle one another – such as in 2016’s “Captain America: Civil War” – the tragic battle between heroes resembles the scale and savagery of Achilles fighting Hector in the Greek “Iliad” or Arjuna battling Karna in the Hindu “Mahabharata.” Among the Avengers, when it is revealed that Captain America hid knowledge of who killed Iron Man’s parents, it results in a similarly vicious battle between the two heroes.

And when the Avengers battle monsters and villains, those antagonists often mirror the giants, dragons and beasts of much older stories. Think, for instance, of the Abomination and Red Skull, who resemble ogres found in stories like the Norse myth “Beowulf” or the Chinese folk tale “Journey to the West.”

The primary villains also have mythic connections. Thanos, whose name means “death” in Greek, has similarities to mythic figures of death from around the world. Like the Greek god Hades, at times he appears regal, surrounded by servants and followers, sitting in a throne while wearing armor and a crown. Other times he is like Mara, the god of death in Buddhism, who assumes monstrous forms and commands an army of frightening and misshapen creatures.

The Avengers’ final attempt to defeat Thanos also parallels quests to overcome death found in stories like the Mesopotamian epic “Gilgamesh” or the tales of Siberian shamans. Like those ancient heroes, the Avengers undertake a great journey to acquire magical objects – in their case, the Infinity Stones – to overcome death.

In the case of “WandaVision,” its portrayal of grief and loss brings to mind many famous world myths. In Egyptian mythology, the goddess Isis searches for the dismembered body parts of her murdered husband Osiris. After Isis reassembles Osiris, the couple have a son, Horus. Similarly, when Wanda cannot put Vision’s destroyed body back together, she recreates it out of magic and goes on to have twins with him.

Wanda’s actions also bring to mind a famous tale from the Buddhist tradition. In that story, a woman named Kisa Gotami is heartbroken when her only child dies. She begs the Buddha to bring the child back to life. The Buddha tells her to bring him a mustard seed from a house where no one has died. Going from house to house, Kisa Gotami discovers there is no family that has not experienced death, grief and loss. In the end, she comes to terms with her sorrow and joins the Buddhist path.

Interestingly, “WandaVision” arrives at a similar ending. For most of the series, Wanda clings to the idea that she can keep Vision alive and live happily ever after with him. But she eventually realizes it is wrong to keep her fantasy family alive at the cost of imprisoning an entire town. Like Kisa Gotami, she ultimately acknowledges the reality of death and lets Vision and their children go by ending the spell that animates them.

As Wanda watches Vision slowly vanish before her eyes, viewers may be reminded of the myth of Orpheus, a Greek hero, and his wife, Eurydice. After Eurydice dies from a snakebite, Orpheus persuades Hades to release her from the underworld. Unfortunately, on the journey back, Orpheus breaks the one rule Hades gave him: Do not look at her before reaching the surface. When he does, he watches Eurydice disappear all over again.

It’s possible that these parallels between the Marvel stories and ancient myths are part of their ongoing popularity. Both genres tap into fundamental questions that people have been trying to answer for thousands of years. What is worth fighting for? How do I live my best life? Why do we have to die?

“WandaVision,” meanwhile, is all about grief, but – like many myths before it – there is a sprinkle of hope. As Vision begins to disappear, he tells Wanda, “I have been a voice with no body, a body but not human, and now, a memory made real. Who knows what I might be next? We have said goodbye before, so it stands to reason, we’ll say hello again.”

Those words capture the same ache felt by Isis, Orpheus, Kisa Gotami and any person – ancient or modern – who has ever lost a loved one. The mythological tales remain relevant across time and across cultures, reappearing in these Marvel stories. That fact makes me wonder if we can alter Vision’s famous words just a bit: “What is Marvel, if not mythology persevering?” 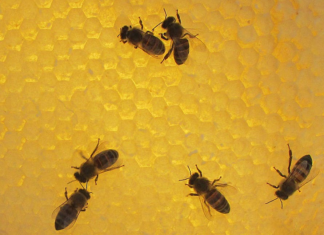 Lessons from Africa on how to build resilient bee colonies

Staff Writer - March 21, 2020
Neil Rusch, University of the Witwatersrand Honeybees are under threat globally. These important pollinators are affected by issues of nutrition, habitat loss, pesticides, a changing...

The guts of an Apple iPhone show exactly what Trump gets...