In a world whose attention is fixed on the victims of sexual assault and violence, the 2018 Nobel Peace Prize was awarded to Denis Mukwege of the Congo and Nadia Murad of Iraq “for their efforts to end the use of sexual violence as a weapon of war and armed conflict.”

The two winners, said the Nobel committee in its award announcement, “have made a crucial contribution to focusing attention on, and combating, such war crimes. Denis Mukwege is the helper who has devoted his life to defending these victims. Nadia Murad is the witness who tells of the abuses perpetrated against herself and others.”

The Conversation’s archives provide background on the problems the two winners are trying to address.

In 2015, scholar Lee Ann De Reus got ahead of the Nobel committee when she wrote an analysis for The Conversation headlined “Denis Mukwege Deserves the Nobel Peace Prize for His Work in Congo.”.

Mukwege, a physician, runs a hospital for victims of sexualized violence in the Congo, the site of armed conflicts for the last 20 years. One 2011 study estimated that 48 women were raped every hour in that country. While what is known as the Second Congo War ended in 2003 with an estimated 5 million dead, violence has continued throughout the country since then, with rape frequently used by militias to terrorize civilians.

Hospital records documented that at the time De Reus wrote the article, Mukwege had “personally treated over 20,000 women, girls, men and boys who have suffered the physical and psychological wounds of traumatic rape.”

Reports emerged from the Middle East in 2015 that the Islamic State group, or IS, was systematically raping women and girls under the pretext that their religion sanctioned such assaults on non-Muslims. Nobel winner Nadia Murad, a member of a minority in Iraq known as the Yazidis, was herself raped by IS members, along with thousands of other women and girls abducted by the militants. Murad was able to escape her captors and has subsequently devoted herself to publicizing the ordeal of IS victims.

“Beheadings, burning people alive, mass rape – these are the methods of IS terror,” writes international law scholar Michael Scharf. But countries that wanted to fight IS and its brutal methods found themselves in a quandary, wrote Scharf. IS wasn’t a state, and international law made fighting such a group difficult. The need to fight IS, writes Scharf, would challenge international law’s very foundation.

From honor killings to female infanticide to forced marriages and trafficking, “This issue transcends national borders and class boundaries to touch the lives of roughly 33 percent of all women worldwide,” they write.

4. Stopping sexual predation where it starts

How to fight the scourge of sexual assault and violence in the U.S.? Begin with children, write scholars Poco Kernsmith, Joanne Smith-Darden and Megan Hicks.

Right now, prevention programs focus on teaching girls and women how to minimize their risks of being assaulted. Instead, write the scholars, “Real prevention needs to focus on the only person who can actually prevent harassment: the potential perpetrator.” 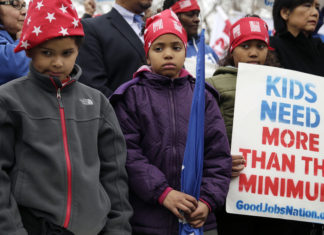 Staff Writer - March 6, 2015
By Lisa Dodson, Brandeis University Fifty years ago, Lyndon Johnson spoke of war on poverty and pursuit of a great society. He talked about investing...