Most Americans seem to think international trade deficits are a bad thing.

A March poll, for example, showed that more than two-thirds think the U.S. should take steps to reduce the trade deficit with China, even if a resulting trade war drives up consumer prices.

That’s in large part because of the notion expressed by some that the U.S. is “losing” if it has a trade deficit, one of the main justifications used for fighting a trade war with China.

As I’ll explain, such a notion is bad economics.

Much economic research has shown that when countries trade with each other, global wealth grows, and all countries gain.

What this means for trade deficits

Policies that aim to reduce trade deficits hinder trade and work against the potential gains from comparative advantage.

A country like the U.S. runs an annual trade deficit with a partner country when Americans buy more goods and services from the partner than they sell to it. As a result, money flows out of the U.S. to the country, which sounds bad.

But that’s not the end of the story. Those foreigners with the trade surplus – let’s say in China – now have extra saving that needs to be put to work. A lack of productive investment opportunities at home means they look to other countries – like the U.S. – to profitably use their money.

In other words, money flowing out to pay for imports flows back in to help pay for productive investment in new capital. The U.S. is an appealing place for the Chinese to put their money because the U.S. is really good at producing capital goods. Put another way, it has a comparative advantage in investment.

In 2017, Americans bought about US$552 billion more goods and services from abroad than foreigners purchased from the U.S. But foreigners sent about that amount right back to the U.S. to help American businesses build factories, create jobs and increase growth.

In short, trade deficits mean that international capital markets are working the way they should. They do not imply a loss of American wealth, or that other countries are “taking advantage” of the U.S.

Richer as a result

In general, trade imbalances are driven by natural market forces and reflect efficient borrowing and lending across the globe. And while it is always important to consider the consequences of international trade for inequality and the distribution of the gains from trade – there are no guarantees that those gains will be evenly distributed – the end result is higher overall global economic growth.

Trade deficits can be a problem when those deficits are due to government borrowing in countries with weak economic and political institutions, or in smaller countries where free capital flows might be destabilizing.

But for well-functioning economies like the U.S., trade deficits are not an inherent problem. In fact, we’re better off having trade deficits than imposing tariffs and restrictive trade policies to prevent them. 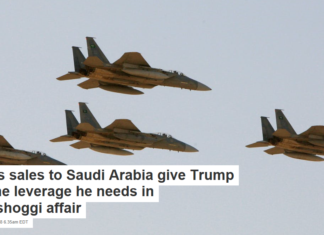 Arms sales to Saudi Arabia give Trump all the leverage he...

All Latinos don’t vote the same way – their place of...

What is a tariff? An economist explains