The government of Afghanistan and that country’s economy relied heavily on foreign aid until the U.S. withdrawal. That support is on hold, although the United States and its allies have begun to take steps toward resuming some humanitarian assistance. Here, Mohammad Qadam Shah, an assistant professor of global development at Seattle Pacific University who conducted in-depth research regarding Afghanistan’s aid administration, answers five questions about the past, present and future of aid to his native country.

1. What did foreign economic aid accomplish in Afghanistan?

Some US$150 billion in nonmilitary U.S. aid flowed into Afghanistan from 2001 to 2020, plus billions more from its allies and international organizations.

Likewise, aid increased access to health care for most of the population. Life expectancy rose over the two decades by about a decade, to 64.8 years in 2019, according to the World Bank.

Afghanistan also made progress in terms of governance reform, with the adoption of a new constitution in 2004 that established a framework for liberal democratic governance and protecting human rights. It held four presidential and provincial council elections and three parliamentary elections.

International aid helped construct and pave thousands of miles of roads and streets, either rehabilitated or built from scratch.

2. What were the drawbacks?

International development experts do not dispute that aid can make a positive difference. What they criticize is that this assistance, even in vast amounts, doesn’t necessarily solve a country’s problems. That is the case in Afghanistan.

Based on what I’ve seen firsthand in my research, the problem in Afghanistan was not the amount of aid, but its mismanagement.

The highly centralized governance system Afghanistan adopted in 2001 gave its president unconstrained political, fiscal and administrative power, without any way for the legislature or the public to hold the executive branch of government accountable. To a degree, the government was accountable to foreign donors, but this lack of checks and balances contributed to systemic corruption.

Afghanistan’s $20 billion economy was heavily dependent on foreign aid, but its centralized governance system was prone to mismanaging it.

I believe the only way to have fixed this problem, before the Taliban took over again, was to defund the country and reform the aid management system in a way that the people had the opportunity to participate in the decision-making process. And I would expect to see a centralized, exclusive aid management system under the Taliban to replicate the same flaws and challenges seen in Afghanistan over the past two decades.

3. What’s standing in the way of aid delivery?

Economic assistance can support long-term economic development or help meet more immediate humanitarian objectives – such as providing food and shelter after disasters, or any help intended to save immediately imperiled lives.

As long as the Taliban remain in control, the only aid likely to flow from the U.S. and most of its allies will surely be the humanitarian kind. Even that money, however, will likely be contingent upon whether Afghanistan’s new authorities respect human rights, form an inclusive government and prevent Afghanistan’s territory from being used for terrorist purposes.

But the Taliban are mostly running Afghanistan like they did in the 1990s – with an iron fist.

The Taliban’s interim cabinet includes no women or members of ethnic, religious and linguistic minorities. And there are reports that the Taliban are already forcibly displacing people in Hazara communities and not letting girls go to school.

The U.S. military and diplomatic withdrawal precipitated the collapse of the Afghan government and the Taliban’s takeover, disrupting aid delivery. Thousands of foreign aid workers and their Afghan former colleagues have left the country.

The few exceptions include a handful of humanitarian aid programs: the Norwegian Refugee Council, the Red Cross, Doctors witout Borders and the World Food Program are all still operating in Afghanistan.

In August 2021, the U.S. froze more than $9 billion of Afghanistan’s assets. Nearly all sources of Afghanistan’s aid, including the European Union, the International Monetary Fund and other multilateral organizations, stopped disbursing assistance.

“The economic and development outlook is stark,” the World Bank observes.

On Sept. 13, 2021, the U.S. Agency for International Development said it would dispatch $64 million in new humanitarian aid to Afghanistan, channeling it through nonprofits and U.N. agencies. But it’s not clear, according to the Taliban, that this money is flowing yet.

In October 2021, the European Union pledged 1 billion euros, about $1.2 billion, in humanitarian aid and other forms of support.

In addition, Pakistan and China are providing emergency aid, as have a few other countries, including Qatar.

China and Pakistan are teaming up with Russia, Iran and India, along with some former Soviet Central Asian countries, to advocate for the U.N. to recognize the Taliban government, which could facilitate the flow of more aid.

5. What are some of the consequences?

The Taliban have not yet shown that they can actually govern Afghanistan.

Resistance groups are forming, and ISIS-K poses a significant threat to their ability to keep control of the country.

Perhaps more important, the Taliban lack the money and expertise required to satisfy the basic needs of the Afghan people.

Thousands of Afghan public servants are demanding their unpaid salaries. Afghans who used to work for nongovernmental organizations have lost their jobs, as have many others.

An estimated 14 million Afghans were already having trouble getting enough to eat before the disruption of aid. That situation is now growing more dire, according to UNICEF. 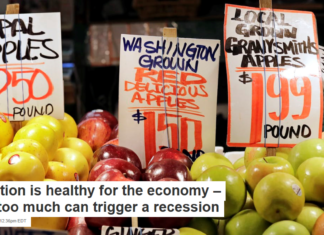 Inflation is healthy for the economy – but too much can...

Staff Writer - June 12, 2019
Richard S. Warr, North Carolina State University In a healthy economy, prices tend to go up – a process called inflation. While you might not like...