By Jonathan Bridge, University of Liverpool

As all good Monty Python fans know, water technologies feature large in the legacy of benefits left by Roman civilisation. But while aqueducts, sewers and baths retain an obvious presence in the landscape and in the archaeological record, the Romans’ largest and most important water achievement may have been “virtual”.

The Romans developed networks of trade and food supply that enabled them to escape local water constraints, in a way that is explained in a new study in the journal Hydrology and Earth System Sciences. Fertile regions such as southern Spain or Italy’s Po valley would grow lots of food and ship it back to Rome or to the drier outposts of the Empire.

Embedded within this is a what geographers call a virtual water trade – an indirect way of shifting this precious resource from wetter, less populated areas to those regions with more people or a less consistent climate.

The map below shows this in action. The amount of virtual water imports (a) and exports (b) in different parts of the Empire are illustrated by the size of the circles. The numbers express this in tonnes of grain. Rome is by far the largest water importer, followed by Alexandria and Memphis in Egypt, and Ephesus and Antioch in modern-day Turkey. Spain and Egypt were the biggest exporters.

All ships lead to Rome

The paper’s primary author, Brian Dermody at the University of Utrecht, suggests this sophisticated water economy ultimately contributed to its own downfall as it enabled urban populations to boom beyond sustainable levels.

Does this sound uncomfortably familiar? In the next 30 years we are facing a critical combination of inter-related stresses on the core resources that keep our civilisation running. As it happens, the Romans gave us a word for that too – the “food-water-energy nexus” (from the Latin nectere, to bind together).

So are we doomed to the same fate as the Romans?

As its name suggests, the nexus recognises that different resources are intimately interconnected. We need water for drinking, washing and for industry; but we also need it to grow food, and around 70% of global fresh water supply is used for farming. As populations grow and become more wealthy, demand for food will increase, placing pressure on domestic water supply and industrial output.

Economic growth and technological developments increase energy use, driving additional demand for water in power station cooling and other uses in energy generation. The rise in shale gas extraction provides a stark illustration of this: irrespective of the many other ethical and political issues surrounding fracking, it is its thirst for water (used to force the hydrocarbons out of the rocks) that may prove the key limitation. After all, 38% of the world’s shale gas resources are located in areas of extremely high water stress or arid conditions. In the UK, plans for fracking in major regions such as the Severn catchment could place untenable pressure on water use for farming and domestic supply.

In all this complexity, the mega-issue of climate change arguably plays only an aggravating role. Intensive farming is degrading soil, its primary resource base, up to 100 times faster than the rates at which it is formed. Non-renewable fuel and mineral resources are becoming increasingly scarce and more costly to recover. And renewable, drinkable water supplies are under often extreme threat.

Solving climate change will not in itself solve the problems of the food-water-energy nexus; in fact it should be apparent that our effective response to climate change is deeply entwined with a sustainable untangling of the nexus.

Like the Romans, the “modern” response to the emergent limitations of the food-water-energy nexus was economic. Global trade through the 20th century allowed us to circumvent local or regional resource limitations, stimulating unprecedented population growth along with rising wealth and living standards.

Many countries could not hope to maintain their current consumption of food and resources if they were forced become self-reliant on resources available within their territory – in the current economic and technological conditions, at least.

This makes the global economy vulnerable to regional problems. Look at this year’s escalation of tension between Russia and the West, for instance. Sanctions imposed by both sides have affected international trade in wheat and other crops, leading to supply shortages or gluts in some places and the destabilisation of farming economies and farmer incomes in others – and has raised the threat of disruption to transnational energy supplies. Again, the challenges of the nexus – and our vulnerability to those changes – transcend the background threat of climate change.

So, faced with challenges which appear strikingly similar, what can our postmodern, self-aware civilisation do to avoid the fate of the Romans? We cannot stop the nexus any more than we can prevent the climate change that will result from our current levels of greenhouse gas emission. Business as usual is clearly not an option. In the absence of a magic bullet (or something much worse, an environmental disaster or collapse), resilience is the key.

One advantage we have over the Romans is information; we can learn from precedent. We can see what is over the horizon and make a judgement on how it may impact our lives and livelihoods. The challenge, unfortunately, remains how to stimulate people and politicians to change in response to those dangers. 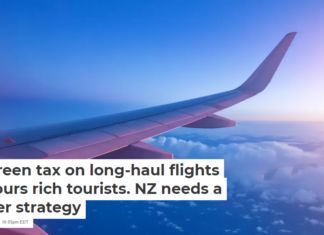 Staff Writer - March 26, 2021
Michael Lueck, Auckland University of Technology International tourism has clearly been hit hard by COVID-19. But despite the desperation...

NCAA amateurism appears immune to COVID-19 – despite tide in public...