This article is part of The Conversation’s worldwide series on the Future of Nuclear. You can read the rest of the series here.

What is the economic cost of nuclear power? That turns out to be a very difficult question to answer.

The United States and other countries have plentiful experience building and operating nuclear power plants. Currently 438 nuclear reactors with a combined capacity of 379,000 megawatts generate more than 10% of the total electricity used worldwide.

Nevertheless, there is great uncertainty about the cost of building new plants. The existing fleet in the US and most developed countries is very old, dating back to a period of intense growth in the 1960s and 1970s. In the US, the most recent construction permit for an operating reactor was issued in 1978, although completion work on a couple of stalled projects and “uprates” – capital refurbishment that increases capacity – have occurred at a number of units.

New construction fell off in other developed countries, too. The few additions made since 1990 were mostly in Japan, Korea, Eastern Europe, Russia and China.

Since 2000, however, there has been renewed interest in constructing new nuclear capacity, partially due to the dramatic increase in fossil fuel prices before the financial crisis and also growing concern about CO2 emissions from fossil fuels. Unfortunately, it’s been difficult to know how much it costs to build new plants because of this lack of recent experience.

The table below shows an estimate by the US Energy Information Administration (EIA) of the future cost of electricity from new nuclear plants compared with the cost from new natural gas-fired generators and utility-scale solar photovoltaic (PV) units.

Among the three options shown, nuclear power is right in the middle, with total costs in 2012 of about $96 per megawatt hour (MWh), most of which involves capital construction costs. On the high end is solar power at $130 per MWh, and gas at the low end at $64 per MWh.

The estimates for the capital cost of nuclear – for plants entering service in 2019 – assume that units can be built without the disastrous delays and overruns that plagued the US industry in the past, and which have plagued some recent projects, too. And the nuclear estimate also doesn’t take into account the benefit of certain subsidies currently available for some new construction.

Among the reasons it has become so difficult to know the price of nuclear is that supply chains have atrophied and hard-won engineering and construction experience has dissipated. Meanwhile, social pressures for improved safety – preceding the Fukushima nuclear disaster in Japan – forced design changes over the years, and we have yet to see what the impact will be on actual construction costs.

In 2005, the French firm Areva began construction at Olkiluoto, Finland, of its new design, the EPR reactor, a pressurized water reactor built to resist the impact of a commercial airline crash.

Unfortunately, that unit is, so far, five years overdue and projected to cost three times the original estimate. Construction of a second new EPR unit at Flammanville, France, was begun in 2007 and is already three years overdue with a more than doubling of projected costs. Regulators in France have also recently discovered “very serious” weak spots in the reactor there.

In 2013, Southern Company began construction of two new units at the Vogtle station in the state of Georgia using Westinghouse’s new AP1000 design. Those units, too, have already run into delays and cost overruns, although the process is not far enough along to draw a firm conclusion about the impact on cost. These cases evoke memories of the very bad experience with construction delays and cost overruns that plagued the US industry from the 1970s.

In fact, the majority of new construction in recent years has been in China. The country has 27 reactors already in operation, all but three of which were built since 2000. The 24 reactors presently under construction in China represent more than one-third of current global construction.

So far, there has been no public record of major construction delays and cost overruns in China, although it is difficult to know what lesson to draw from that fact for projects in the West and elsewhere. It is also difficult to use the cost of their construction to inform estimates of what costs might be in the US or other developed countries.

Uncertainty about the cost of construction is overwhelmingly important in determining the cost of electricity from nuclear because building the plant accounts for nearly 80% of the total price tag. More predictable fuel and operating costs, including waste disposal, account for the remainder. While waste disposal poses important and contentious safety and environmental questions, economically speaking it is not a major factor. The same is true of decommissioning costs.

The EIA’s estimate for the natural gas fuel cost, in the table near the top of the article, assumes a price increasing from approximately US$5 per million British Thermal Units to just under $8 between 2019 and 2040, reflecting the currently low prices in the US. It does not, however, include any charge or penalty for the greenhouse gas emissions associated with natural gas-fired generator.

Similarly, neither the cost of nuclear nor the cost of solar reflects any of the government subsidies currently available. All of these numbers make assumptions about capacity and other factors that need to be scrutinized. As such, the table makes a couple of key points, and leaves out important ones, too.

At current natural gas prices, and absent a price on carbon, the economics of the natural gas-fired plant clearly make it the cheapest. This is why a large share of new construction in the US is natural gas-fired, and also why existing units are capturing a larger share of the wholesale market.

However, natural gas prices are notoriously volatile, which is why many regions worry about diversifying their supply despite the fact that electricity from natural gas is currently cheap. The US has used the switch from coal to natural gas as a tool for making an initial dent in its carbon emissions, but in order to make the reductions necessary over the long run, it will eventually be necessary to cut emissions from natural gas-fired generation absolutely.

Solar PV is a zero-carbon emission source of electricity that is currently costly relative to nuclear and natural gas. This cost has declined dramatically in recent years, and we can expect further reductions in the coming years.

While the US can probably afford to source a significant fraction of its electricity generation from solar PV even when the cost is higher than power sourced from fossil fuels, further decreases in cost are essential in order for fast-growing developing countries to do the same.

Nuclear is also a zero-carbon source of electricity, and, among the options for emission-free power, its economics look good. However, that assumes that the forecast cost of construction is reliable. That has not always been true, and the current new builds in Europe and the US do not inspire confidence.

In addition, society’s concerns about waste and safety have often overridden the narrow economic perspective.

The future contribution that nuclear power makes to expanding economic development without harmful carbon emissions hinges on whether the industry can make progress in controlling capital costs while addressing society’s safety and waste disposal concerns. 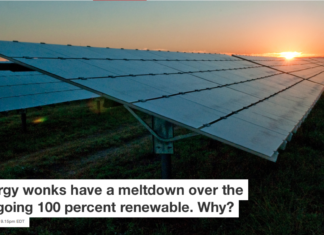 Staff Writer - June 23, 2017
Joshua D. Rhodes, University of Texas at Austin Science is messy, but it doesn’t have to be dirty. On June 19, a group of respected energy...