On Feb. 11, 2020, Brazilian Maya Gabeira surfed a wave off the coast of Nazaré, Portugal, that was 73.5 feet tall. Not only was this the biggest wave ever surfed by a woman, but it also turned out to be the biggest wave surfed by anyone in the 2019-2020 winter surfing season – the first time a woman has ridden the biggest wave of the year.

As a female surfer myself – though of dubious abilities – this news made me really excited. I love it when female athletes accomplish things that typically garner headlines for men. But I am also a physical oceanographer and climate scientist at Brandeis University. Gabeira’s feat got me thinking about the waves themselves in addition to the surfers who ride them.

What makes some waves so big?

Waves start with a storm

Think for a few seconds about what happens when you throw a stone into a serene pond. It creates a ring of waves – depressions and elevations of the water’s surface – that spread out from the center.

Waves in the ocean act similarly. On rare occasions earthquakes and landslides can generate waves, but usually waves are created by wind. Generally, the biggest and most powerful wind-generated waves are produced by strong storms that blow for a sustained period over a large area.

The waves that surfers ride originate in distant storms far across the ocean. For instance, the wave that Gabeira surfed at Nazaré was likely generated by a storm somewhere between Greenland and Newfoundland a few days earlier. The waves within a storm are usually messy and chaotic, but they grow more organized as they propagate away from the storm and faster waves outrun slower waves.

This organization of the waves creates “swell,” or regularly spaced lines of waves. When describing a swell, oceanographers and surfers generally care about three attributes. First, the height – how tall a wave is from the bottom to the top. Then the wavelength – the distance between the top of one wave and the top of the wave behind it. And finally the period – the time it takes for two consecutive waves to reach a fixed location.

Waves are not just sitting on top of the ocean. Their energy extends far below the surface, sometimes as deep as 500 feet. When waves move into shallower water close to shore, they start to “feel” the ocean’s bottom. When the bottom pulls and drags on the waves, they slow down, get closer together and grow taller.

When a swell is traveling through the ocean, the waves are all more or less the same size. But when swells run into a coastline, waves at one beach can be many times bigger than waves at another beach a mere mile away. So why don’t we find large waves breaking on all shores? Why are there some spots like Nazaré in Portugal, Mavericks in California and Jaws in Maui that are notorious for having big waves?

It comes down to what’s at the bottom of the ocean.

Most coasts do not have a smooth, evenly sloping bottom extending from the deep ocean to shore. There are reefs, sand banks and canyons that shape the underwater terrain. The shape and depth of the ocean floor is called the bathymetry.

Just as light waves and sound waves will bend when they hit something or change speed – a process called refraction – so do ocean waves. When shallow bathymetry slows down a part of a wave, this causes the waves to refract. Similar to the way a magnifying glass can bend light to focus it into one bright spot, reefs, sand banks and canyons can focus wave energy toward a single point of the coast.

This is what happens at Nazaré to create giant waves. Extending out to sea from the shore is an underwater canyon that was etched out by an ancient river when past sea level was much lower than it is today. As waves propagate toward shore over this canyon, it acts like a magnifying glass and refracts the waves toward the center of the canyon. This focusing of waves by the Nazaré Canyon helps make the largest surfable waves on the planet.

The next time you hear about someone like Maya Gabeira surfing a record-breaking wave at Nazaré, think about the faraway storms and the unique underwater bathymetry that are essential for generating such big waves. The wave she rode had been on a long journey, and at its crashing end, it was memorialized as she took off from its crest and rode down its huge, steep face. 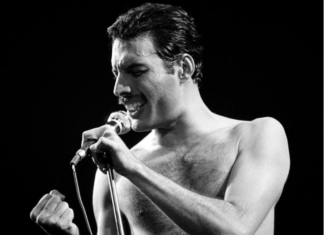 Staff Writer - February 22, 2019
Laurie Marhoefer, University of Washington Millions of people will tune in to the Oscars to see “Bohemian Rhapsody,” the biopic of Queen frontman Freddie Mercury,...