By Nick Hawes, University of Birmingham

James Dyson’s decision to fund a robotics laboratory at Imperial College London may not lead to the super advanced robot friends of our dreams, but what he has planned could make robotic domestic appliances significantly more realistic.

The Dyson Robotics Laboratory is a £5 million collaboration between the British-based domestic technology company and one of the UK’s leading computer science departments. Researchers at the centre will investigate how to help robots not only sense their surroundings but be able to identify objects within their immediate environment. This, it is hoped, will mean a robot could sort out your dirty washing or clear a table.

It seems everyone is getting in on the robotics act lately. The UK government has highlighted the field among its eight top priorities for science spending and the European Commission has pledged new funding for robotics research.

Google has bought both Boston Dynamics, famous for its animal-like robots, and artificial intelligence specialists DeepMind. Amazon, meanwhile, is teasing us with promises of deliveries-by-drone in the future.

Dyson’s comments about creating “machines that see and think in the way that we do” have inevitably led to excitement about futuristic robot servants. We should try to contain our excitement on this front as we are likely to be disappointed. It is highly unlikely the Dyson lab or any of the other bold plans announced over the past 12 months will lead to robots capable of learning or acting like humans. Most robots, even the most sophisticated, are still usually only capable of doing one thing. The difficulties of robotic perception, cognition and action in the real world are such that the required general purpose intelligence is still many generations away.

But this new centre is not about general purpose intelligence. It is focusing on 3D sensing, a fairly well understood robotics technology that could realistically produce applications in the near term future.

Most tasks a robot must do, say, grasping objects or driving through crowds, involve measuring. For many years robots could only measure in 2D, typically using sonar or laser. The jump to 3D is essential, and has been made possible by devices such as the Microsoft Kinect and also by monocular visual SLAM, a technique pioneered by Andrew Davidson, the very man who will lead the new Dyson lab.

“Monocular” means this technique uses just one camera, while “visual” means the camera uses normal, visible light, unlike the Kinect, which uses infrared. This is important as normal light captures useful information about the world, such as colour, which is useful for telling objects apart, and shadows that can help indicate shape and position, neither of which are visible in other bandwidths.

The “SLAM” part stands for simultaneous localisation and mapping. This is the technique of building a map – a 3D picture of the world – while working out where you are on that map at the same time. When a robot moves around a room, visual SLAM is performed by finding distinctive parts of an image, then tracking how these parts move as the robot moves.

SLAM is an essential technology in almost all robots that move around, as it allows them to work out where they are. A 3D map can also allow a robot to find objects in its environment, such as your keys, or avoid obstacles, such as your cat. It can also use the map to decide how best to do things, such as hoovering your floor using the shortest route possible.

Cameras are an ideal sensor for a home robot because they can be small, light and cheap. This means future Dyson home robots will be able to map your home in 3D for very little extra cost. Images from cameras can also be used for object and face recognition, which would make robotic home help even more efficient.

The Dyson lab won’t bring us Rosie the Robot Maid any time soon but this investment could open the way for a new generation of single-purpose intelligent domestic appliances. It could bring us the robot vacuum that can clean around your complicated media centre and perhaps even something that can tidy up a child’s bedroom without putting everything in the wrong place. That’s a pretty enticing prospect for most parents.

Nick Hawes researches and teaches robotics at the University of Birmingham. He receives funding from both EPSRC and the European Commission to research robotics technology and its application to a range of domains including security and healthcare. 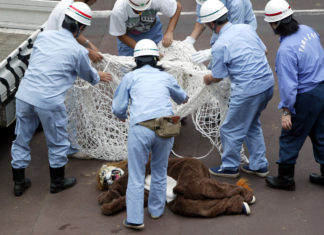 Staff Writer - November 19, 2014
By Yvette Johnson-Walker, University of Illinois at Urbana-Champaign You need only look at the papers or television news to see the reports. Infectious disease outbreaks,...

A climate scientist on the planet’s simultaneous disasters, from Pakistan’s horror...