At the end of March, Netflix released the critically acclaimed “13 Reasons Why.” April features new shows “Girl Boss” and “Bill Nye Saves the World,” while May’s lineup includes the second season of Aziz Ansari’s “Master of None,” along with the return of binge favorite “House of Cards,” back for its fifth season.

Many will relish getting lost for hours on end in these shows. But others might feel guilty about their extended screen time, seeing it as sign of laziness. Or maybe they’ve seen an article about one of those studies linking binge watching to depression.

As a professor of communication studies, I’m interested in understanding the ways people use TV, video games and social media to improve their well-being. And I’ve learned that even though watching TV gets a bad rap as the “junk food” of media diets, it can be good for you – as long as you give yourself permission to indulge.

Why TV gets the shaft

My colleagues and I collected some data suggesting that there is, in fact, a double standard for how we think about different media bingeing experiences. We administered a survey that recorded participants’ thoughts about reading or watching TV for the certain amounts of time.

Respondents associated more attributes like laziness and impulsivity with people who consume several hours of a television show in one sitting, compared to those who do the same with novels.

This finding probably comes as no surprise.

Although reading a novel for several hours at a time for entertainment can arguably be just as sedentary and addictive as watching TV, no derogatory term like “bingeing” exists for the act of devouring an entire Harry Potter novel in one night. We simply call it “reading.”

Just think about the pejorative term “binge,” which conjures images of excess and abuse (as with binge eating or binge drinking). Contrast this with “marathon viewing,” which connotes accomplishment, and has traditionally been used to describe the experience of consuming multiple installments of film – not TV series – in rapid succession.

Why is it that we “binge” when we watch a lot of TV, but it’s a “marathon” when we’re watching a bunch of movies?

Perhaps this double standard is rooted in television’s lower status as a source of entertainment. Historically, TV viewing has been considered a mindless activity, capable of dulling the intellect with “a vast wasteland” of shallow, lowbrow content. Watching TV has also been regarded as a lazy activity that displaces time spent on more active, productive pursuits. Avid viewers of the “boob tube” or “idiot box” will get stereotyped as “lazy couch potatoes.”

Meanwhile, headline-grabbing research linking TV viewing to depression and loneliness hasn’t helped binge viewing’s reputation. These correlational studies may give the misleading impression that only depressed or lonely people engage in binge watching – or worse, that binge viewing can make people depressed and lonely.

The good news about binge watching

But binge viewing TV has become popular for a good reason: Despite its negative reputation, television has never been better. We are in the midst of a golden age of television, with a variety of shows that provide a steady diet of novel premises, long-running, elaborate plots and morally complicated characters. Far from dulling the intellect, these shows create more suspense, interest and opportunities for critical engagement.

According to journalist and media theorist Steven Johnson, watching these shows may even make you smarter. He argues that because television narratives have become increasingly complex, they require viewers to follow more storyline threads and juggle more characters and their relationships. All of this makes the audience more cognitively sophisticated.

Gorging on stories is pleasurable, too. When individuals binge watch, they are thought to have what’s called a “flow experience.” Flow is an intrinsically pleasurable feeling of being completely immersed in a show’s storyline. In a flow state of mind, viewers intently focus on following the story and it’s easier for them to lose awareness of other things, including time, while they’re wrapped up in viewing. One study found that viewers will continue viewing additional episodes in order to maintain this positive flow state, so there is an addictive quality to binge viewing. Interruptions like advertising can break the continuous viewing cycle by disrupting the flow state and drawing viewers out of the story. Luckily, for TV bingers, Netflix and Hulu are ad-free.

Perhaps one of the greatest benefits binge watching can offer is psychological escape from daily stresses. What better way to decompress than watching four (or seven) straight episodes of “House of Cards”? A 2014 study found that people who were particularly drained after stressful work or school experiences watched TV to recharge and recuperate.

Unfortunately, this study also found that TV watching didn’t help everybody. Individuals who bought into the “lazy couch potato” stereotype enjoyed fewer benefits from watching TV. Instead of feeling revitalized after watching TV, they felt guilty.

The researchers believe that the shame associated with TV watching can become a self-fulfilling prophecy, making it hard for viewers to reap psychological benefits.

For this reason, we need to shake the notion that bingeing on stories we engage with on TV is somehow less worthy leisure pursuit than bingeing on stories that we consume other ways, like novels. Immersing ourselves in narratives on TV can be good for us, even in heavy doses, but only if we truly appreciate it for what it is: a pleasure. Not a guilty pleasure, simply a pleasure. 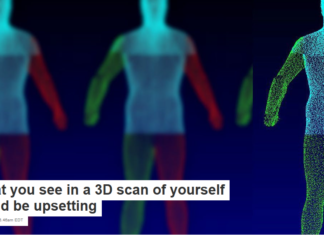 What you see in a 3D scan of yourself could be...

Staff Writer - May 21, 2018
Jessica Ridgway Clayton, Florida State University Amazon is reportedly looking for people who are willing to have their bodies scanned in 3D in order to...

Why Canadian dads are more involved in raising their kids than...