Ohio Attorney General Mike DeWine recently called Ohio Cops for Kids a “purported charity” when he sued the group for allegedly defrauding donors in his state.

The complaint claims that the group spent merely 2 percent of the money raised on its behalf on efforts related to its official mission of helping children whose families were victims of crime. Telcom Enterprises, a for-profit fundraiser the charity hired, kept 79 percent of those funds, and the nonprofit spent the rest on its salaries and overhead, according to DeWine’s lawsuit.

This alleged racket may sound like an isolated case of extreme malfeasance. But the Ohio Cops for Kids case is only the latest example of for-profit telemarketing companies accused of turning donations intended to support good causes into private gold mines.

While researching the finances of charities and the for-profit fundraisers they hire, I have noticed two related problems with the practice of farming out fundraising.

One is legal: State and federal authorities have a limited ability to regulate charities and their fundraisers.

The other is cultural: Charities fight new regulations, arguing that they can police themselves. Yet, they are reluctant to call out their peers who abuse the public trust.

Paying for-profit companies to fundraise for charities isn’t inherently problematic. Because outsourcing gives nonprofits room to focus on work donors really care about, it can be more efficient than hiring in-house staff. This is especially true when there are high upfront costs for fundraising campaigns.

But more often than not, charities that rely on contractors for telemarketing campaigns wind up raising less money for the charity’s operations than they do for the telemarketers, especially when they pay fundraisers on a commission basis.

New York State Attorney General Eric Schneiderman’s office examines regional and national professional fundraising campaigns. In 2017, it found that telemarketing companies pocketed more funds than they passed along to the charities they worked for more than two-thirds of the time.

More shockingly, 18 percent of the time, telemarketers charged charities more in fees than they ended up collecting in donations, leaving the nonprofits worse off than had they not sought donations in the first place.

Whatever their track record, telemarketers have become increasingly reliant on charitable fundraising, if only because other options are being precluded.

The national do-not-call registry, adopted in 1991, gives Americans the option of blocking most telemarketer calls. But this does not extend to solicitations on behalf of charities. That loophole means that for-profit companies may legally dial the more than 229 million registered numbers with charity-related pitches.

Charities must maintain and honor their own do-not-call lists, however.

Perhaps unsurprisingly, as the number of people who have registered their “do-not-call” preferences has risen, so too has solicitation by telemarketers-for-hire on behalf of charities.

What’s more, with telemarketers amassing their own donor lists and charities selling data about their donors, repeat offenders are assured. Once donors give through these fundraising companies, they risk getting other telemarketing appeals for years to come.

One typical defense of the profits earned from charitable telemarketing is that paying telemarketers big bucks is worth it if they make obtaining charitable dollars easier in the future. But do they?

After combing through data collected by state attorneys general serving in California, Michigan, New York and elsewhere, I have seen little evidence that telemarketing campaigns generate more donations at a lower cost over time.

Meanwhile, many of the charities that hire the most egregious professional fundraisers continue to grow despite occasional public relations debacles.

A natural response to this menace is to pursue legal remedies. However, the Supreme Court has ruled that laws capping the share of money telemarketers may pocket violate the charities’ free speech rights.

Enforcement cases like Ohio’s are rare, partly because they can take years of dogged efforts, as Illinois Attorney General Lisa Madigan’s prosecution of telemarketer Safety Publications and the Rockford, Illinois-based VietNow charity demonstrated.

Charities have even helped defeat efforts to require telemarketers to tell donors how their gifts are spent.

This leaves the authorities unable to to target abusive telemarketers unless they intentionally deceive donors about how much money they will retain.

Another complication is that charities face few disclosure requirements. One exception is that they must file annual financial reports with the IRS, including the cash their outsourced fundraisers collect from donors and how much of it their contractors retain.

Done right, this mandate should let donors figure out how much of their money the charities spend on this service. But the data is not reliable.

When accounting researchers from Boston College and the University of Alabama compared charity IRS filings with the professional fundraising reports their telemarketers filed in several states, they found that more than 70 percent of the charities failed to accurately report how much they paid professional solicitors.

Even charities that follow proper reporting practices can exploit a little-known rule to treat some payments to telemarketers as “programming costs” when their pitches help satisfy public education goals.

This makes it difficult for even the most diligent donor to know precisely how much money telemarketers retain, unless they hear about it from the media or watchdogs like Charity Watch.

Absent aggressive enforcement, the charitable sector has struggled to regulate itself.

The biggest offenders often work on behalf of nonprofits doing heartstring-pulling work like serving veterans and supporting people with cancer.

The Ohio Cops for Kids case shows the potential for aggressive action by state authorities. However, the fact that the offenders in extreme cases may profiteer for years without suffering consequences also highlights a festering accountability crisis. 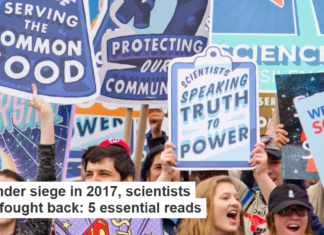 Staff Writer - December 26, 2017
Maggie Villiger, The Conversation 2017 may well be remembered as the year of alternative facts and fake news. Truth took a hit, and experts seemed...