Imagine discovering a sea lion in the middle of the woods, more than a mile inland from the beach. Or coming face to face with one of these curious creatures in a local swimming pool or on your front porch.

These encounters are happening in New Zealand with the return of the endangered New Zealand sea lion, the world’s rarest sea lion species. The females normally move up to a mile (about 1.5 kilometers) inland with their pups during the breeding season to protect them from rougher conditions at the coast – but now there are a lot more humans in the way.

Encounters between wild animals and humans can be dangerous for both sides. Sea lions have been stabbed, clubbed, shot and accidentally hit by cars. Roads, fences and residential development can block their movement inland. Some females and pups have adapted to commercial pine forests on private lands that could one day be cleared or developed.

As an ecologist, I study species around the world whose populations are recovering after decades or even centuries of immense human pressures and exploitation. Nations are now preparing for a landmark U.N. conference on protecting Earth’s biodiversity that will take place in China from April 25 to May 8, 2022; one important question is how humans can strike a new balance with recovering species such as sea lions, sharks and whales, and make space for these resilient creatures to thrive.

Like many other creatures valued for their meat or fur, New Zealand sea lions were historically hunted to near-extinction. For the past 150 years, remnant populations could only be found on New Zealand’s undeveloped subantarctic islands, more than 300 miles from the nation’s mainland. Today, their population is estimated at 12,000.

These animals typically return to and breed at the original location where they were born, but in 1993, a female sea lion gave birth on the mainland for the first time in centuries. Since then, her offspring have bred for five generations. Other females have followed, and some 20 pups are now born on the mainland each year.

When wild species recolonize areas or shift their ranges in this way, scientists can make predictive models to help determine where the animals could settle in the future and take steps to protect them. But traditional versions of these models can’t account for when and where the recovering species may interact with humans, because these encounters are new developments and may occur under conditions that differ from the past.

In a study published in November 2021, my team and I addressed this issue by creating an integrated species distribution model database, which pairs algorithmic models with expert knowledge to highlight suitable habitats and flag areas for concern. Through it, we found and mapped 395 potential breeding grounds for sea lions all over the New Zealand mainland. We also identified human-related challenges for the animals, such as roads and fences that could block their inland movement.

Our research can help wildlife managers and local officials search for sea lions, post sea lion crossing signs on roads, verify or restore breeding sites and determine where to work with landowners and spread awareness. This kind of tool can help inform similar efforts for other species that are recovering or moving into new habitats and regions in response to climate change.

Of course, humans are happier to make space for some wild species than for others.

I did research in the Falkland Islands from 2015 to 2016 and found that residents welcomed the return of sei, fin, minke, southern right and blue whales to local waters. All of these species were intensively hunted beginning in the 1800s but started making noticeable comebacks after nations adopted the 1982 moratorium on commercial whaling.

For local residents, seeing whales offshore while tending sheep, taking the ferry or flying from island to island was a special experience. We used residents’ historical knowledge and thousands of whale observations from the 1940s to 2015 to inform scientific surveys around the islands. This work helped others analyze sei whale distribution around the islands and resulted in the creation of the world’s first Key Biodiversity Area for sei whales – a place that is considered globally significant for the rare, unique, or many species it contains.

Finding that Falkland residents enjoyed seeing whales offshore suggested to us that they would support processes like marine spatial planning to help protect them. Marine spatial planning is a public process for organizing human uses of the ocean, such as shipping, tourism, oil exploration and commercial fishing, in ways that balance them with environmental protection.

Coexisting with some recovering species can be more controversial and delicate to manage, especially if they are perceived as threats to public safety or property.

Along the northeast U.S. coast and up into Canada, white sharks once were severely overfished but are now rebounding in response to climate change, protection efforts and growing populations of seals, their preferred prey. As top predators, sharks help control other ocean species and increase ocean carbon storage. They also are one of the few shark species known to attack humans.

Over the past several years, lifeguards have repeatedly closed popular beaches along Cape Cod in Massachusetts when white sharks are present. Warnings and restrictions intensified after a shark killed a swimmer in 2018. Such measures often spark declines in tourism, but in some places the presence of sharks is slowly becoming an attraction.

Nevertheless, the growing abundance of white sharks is divisive. As shark numbers and sightings increase, scientists and local officials are working to raise awareness and educate the public about them. Monitoring shark movement with drones and other equipment can also help lifeguards warn beachgoers that sharks are present in advance.

Scientists widely agree that the Earth is losing species at a rapid rate, potentially representing the sixth mass extinction in its history. Against that background, these ongoing stories of species recovery take on new urgency, especially when conflicts arise.

Science can help. Predictive models and maps highlight where species may appear in the future. Monitoring species on the move can reveal how numerous they are, how they behave, what habitats they prefer and where they may interact with humans.

When wild species enter new areas, they inevitably will have to adapt, and often will have new kinds of interactions with humans. These encounters won’t always be easy to manage, but I believe that when communities understand the changes and are involved in planning for them, they can prepare for the unexpected, with coexistence in mind. 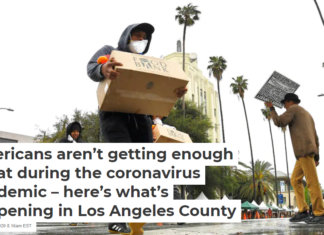 Staff Writer - December 31, 2020
Kayla de la Haye, University of Southern California The number of Americans who can’t get enough food is rising from already troubling levels during the...