Welcome to the third instalment in our series Chemistry of Coffee, where we unravel the delicious secrets of one of the most widely consumed drinks in the world. As you listen to the whirring grinders in your local cafe, think of the long journey those beans have made – and what they’ve gone through to be there.

The vast majority of the brewed coffee we drink in Australia comes from the arabica species (Coffea arabica), despite 30% of world coffee production being the “robusta” variety (Coffea canephora).

Coffee is a member of the botanical family Rubiaceae, which is widely distributed in the tropics and subtropics. Other members of the family include chincona, the source of quinine, and gardenias, the boldly scented ornamental.

In terms of taste, connoisseurs agree that arabica produces a superior cup of coffee. Robusta beans produce coffee much more bitter and grainy in taste, but higher in caffeine than arabica.

And as the name suggests, robusta is a much more hardy plant than the delicate arabica, and less susceptible to insect pests (mostly due to its higher caffeine content) and fungal infections. It also grows in a wider range of environmental conditions and has a higher yield per acre than arabica, so is cheaper to produce and buy. On the open market green arabica beans sell for around A$5 per kilogram, and robusta beans retail for approximately A$2.50 per kilogram.

Australia only grows arabica coffee. The cool climate and absence of insect and fungal pests create ideal growing conditions. Flowering occurs for a period of a couple of days sometime between October and December, depending on spring rainfall.

The coffee cherries begin to ripen in June and are harvested three to four months later depending on the season. The coffee fruit are a deep red purple colour when they are ready for harvest.

Some coffee producers in Australia still harvest beans by hand, but this is a labour-intensive and time-consuming process. The larger plantations employ mechanical harvesting to increase yields and lower costs.

The harvesters themselves are quite refined bits of equipment. They straddle the rows of coffee and employ oscillating nylon fingers to gently shake the branches of the coffee bush. The ripe coffee beans that have been gently dislodged from the branch fall onto a conveyor belt which carries the beans to a collection hopper on the back of the harvester.

Like any fruit, coffee beans are covered by a fleshy layer which is high in sugars. The the fleshy pulp is removed using machines that are basically rotating cheese graters. The coffee fruit is fed into the top of the de-pulper with water and the rotating grater strips fruit from coffee bean.

The coffee beans are sent one direction, through a gap just wide enough for them to pass, and the pulp is sent another direction to be composted.

The de-pulped coffee beans are then dried down to about 12% moisture either in the sun or in mechanical driers. Once the beans are dry they can be stored for years under suitable conditions before being roasted.

To ensure that you get the best return for your effort all the process as described above must be carefully controlled:

The processing of the coffee beans after process is critical. If coffee beans are allowed to go mouldy the taste of the roast coffee can be described as “earthy”. This earthy taste is unpleasant – we tend to associate the sensation with food that has gone off.

So if the coffee producers get everything right, their beans will be clean and dry and ready to be roasted. The beans will come out of the de-pulper intact, and be washed and dried before mould has a chance to take hold.

Now it’s up to the roaster to produce the perfectly roasted bean.

When coffee beans are roasted the beans are heated to over 200C. Surprisingly, the difference between a light roast and the dark roast is only about 10C:

This subtle difference in temperature makes the difference between a delicate-tasting coffee and a heavier, fuller taste of a dark roast cup.

What about instant coffee?

Instant coffee was invented and patented by David Strang of Invercargill, New Zealand in 1890. (Of course Invercargill’s other famous son is Burt Munro, the dashing motorcycle racer of The World’s Fastest Indian fame.)

Strang produced his instant coffee using a spray drying process, much like the process used today to produce powdered milk. The roasted, ground coffee was extracted using water at around 80C, then filtered, concentrated under vacuum and sprayed through a nebuliser into a hot airstream. This process produced a fine powder with an average particle radius of about 300μm.

Today, most instant coffee is made using a freeze drying process. This employs the principle of the sublimation of water (phase change directly from solid to gas) under vacuum.

Frozen coffee is placed on metal trays in the drying chamber and then the entire chamber is placed under vacuum. The chamber is warmed using infrared radiation or by heating the trays using conduction. The water vapour is removed by condensation and the chunky coffee granules are removed and are ready for packaging.

The profile on the left is of an instant coffee, while the one on the right is that of an Australian roast coffee. You can see that the chromatogram of the roast coffee is much more complex than that of the instant. We know that the depth of flavour and complexity of the taste of coffee is mostly due to the volatile components produced in the roasting process.

The majority of the volatile compounds in instant coffee are removed when the coffee is heated under vacuum in the freeze-drying process. Just as the water is removed through sublimation the compounds responsible for the complex taste and aroma of coffee are “flashed off” as well.

I’m sure that the atmosphere in an instant coffee factory smells fantastic, but unfortunately, those wonderful compounds that should be in the coffee are now lost. 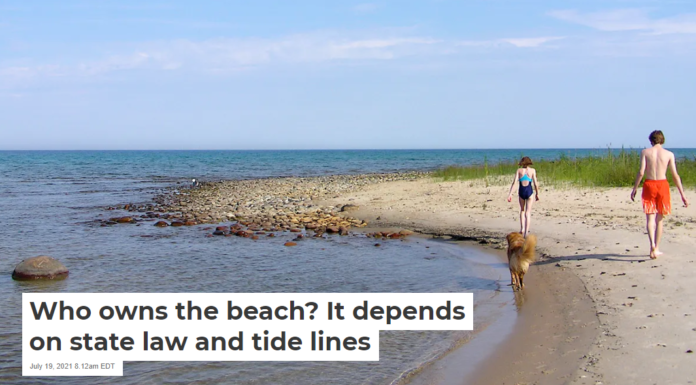 Who owns the beach? It depends on state law and tide lines

HIV prevention pill PrEP is now free under most insurance plans – but the...

It’s mostly mothers who pass on mitochondria – and a new theory says it’s...

Our mostly dry planetary neighbors once had lots of water—what does that imply for...

Pandemic shut down many special education services – how parents can...