By Richard A. Easterlin, University of Southern California

Since 1990, GDP per person in China has doubled and then redoubled. With average incomes multiplying fourfold in little more than two decades, one might expect many of the Chinese people to be dancing in the streets. Yet, when asked about their satisfaction with life, they are, if anything, less satisfied than in 1990.

The disparity indicated by these two measures of human progress, Gross Domestic Product and Subjective Well Being (SWB), makes pretty plain the issue at hand. GDP, the well-being indicator commonly used in policy circles, signals an outstanding advance in China. SWB, as indicated by self-reports of overall satisfaction with life, suggests, if anything, a worsening of people’s lives. Which measure is a more meaningful index of well-being? Which is a better guide for public policy?

A few decades ago, economists – the most influential social scientists shaping public policy – would have said that the SWB result for China demonstrates the meaninglessness of self-reports of well-being. Economic historian Deirdre McCloskey, writing in 1983, aptly put the typical attitude of economists this way:

Unlike other social scientists, economists are extremely hostile towards questionnaires and other self-descriptions… One can literally get an audience of economists to laugh out loud by proposing ironically to send out a questionnaire on some disputed economic point. Economists… are unthinkingly committed to the notion that only the externally observable behaviour of actors is admissible evidence in arguments concerning economics.

But times have changed. A commission established by the then French president, Nicolas Sarkozy in 2008 and charged with recommending alternatives to GDP as a measure of progress, stated bluntly (my emphasis):

Research has shown that it is possible to collect meaningful and reliable data on subjective as well as objective well-being … The types of questions that have proved their value within small-scale and unofficial surveys should be included in larger-scale surveys undertaken by official statistical offices.

This 25-member commission was comprised almost entirely of economists, five of whom had won the Nobel Prize in economics. Two of the five co-chaired the commission.

These days the tendency with new measures of our well-being – such as life satisfaction and happiness – is to propose that they be used as a complement to GDP. But what is one to do when confronted with such a stark difference between SWB and GDP, as in China? What should one say? People in China are better off than ever before, people are no better off than before, or “it depends”?

To decide this issue, we need to delve deeper into what has happened in China. When we do that, the superiority of SWB becomes apparent: it can capture the multiple dimensions of people’s lives. GDP, in contrast, focuses exclusively on the output of material goods.

People everywhere in the world spend most of their time trying to earn a living and raise a healthy family. The easier it is for them to do this, the happier they are. This is the lesson of a 1965 classic, The Pattern of Human Concerns, by public opinion survey specialist Hadley Cantril. In the 12 countries – rich and poor, communist and non-communist – that Cantril surveyed, the same highly personal concerns dominated determinants of happiness: standard of living, family, health and work. Broad social issues such as inequality, discrimination and international relations, were rarely mentioned.

Going against the grain.
Andres Rodriguez, CC BY

Urban China in 1990 was essentially a mini-welfare state. Workers had what has been called an “iron rice bowl” – they were assured of jobs, housing, medical services, pensions, childcare and jobs for their grown children.

With the coming of capitalism, and “restructuring” of state enterprises, the iron rice bowl was smashed and these assurances went out the window. Unemployment soared and the social safety net disappeared. The security that workers had enjoyed was gone and the result was that life satisfaction plummeted, especially among the less-educated, lower-income segments of the population.

Although working conditions have improved somewhat in the past decade, the shortfall from the security enjoyed in 1990 remains substantial. The positive effect on well-being of rising incomes has been negated by rapidly rising material aspirations and the emergence of urgent concerns about income and job security, family, and health.

The case to replace

Examples of the disparity between SWB and GDP as measures of well-being could easily be multiplied. Since the early 1970s real GDP per capita in the US has doubled, but SWB has, if anything, declined. In international comparisons, Costa Rica’s per capita GDP is a quarter of that in the US, but Costa Ricans are as happy or happier than Americans when we look at SWB data. Clearly there is more to people’s well-being that the output of goods.

There are some simple, yet powerful arguments to say that we should use SWB in preference to GDP, not just as a complement. For a start, those SWB measures like happiness or life satisfaction are more comprehensive than GDP. They take into account the effect on well-being not just of material living conditions, but of the wide range of concerns in our lives.

It is also key that with SWB, the judgement of well-being is made by the individuals affected. GDP’s reliance on outside statistical “experts” to make inferences based on a measure they themselves construct looks deeply flawed when viewed in comparison. These judgements by outsiders also lie behind the growing number of multiple-item measures being put forth these days. An example is the United Nations’ Human Development Index (HDI) which attempts to combine data on GDP with indexes of education and life expectancy.

But people do not identify with measures like HDI (or GDP, of course) to anywhere near the extent that they do with straightforward questions of happiness and satisfaction with life. And crucially, these SWB measures offer each adult a vote and only one vote, whether they are rich or poor, sick or well, native or foreign-born. This is not to say that, as measures of well-being go, SWB is the last word, but clearly it comes closer to capturing what is actually happening to people’s lives than GDP ever will. The question is whether policy makers actually want to know.

Richard A. Easterlin does not work for, consult to, own shares in or receive funding from any company or organisation that would benefit from this article, and has no relevant affiliations. 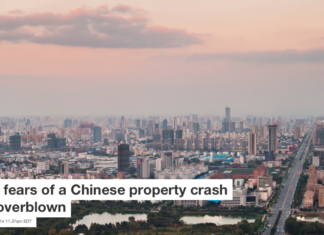 Staff Writer - October 17, 2014
By J Albert Cao, Oxford Brookes University The Chinese property market that has powered the country’s rapid economic growth for a decade and a half...