The recent FIFA scandals may have exposed soccer’s sordid side, but two other major events have refocused the world’s attention on the playing field.

Over the weekend, millions witnessed FC Barcelona’s win over Juventus at the UEFA Champions League final in Berlin; and across the Atlantic, in Canada, the seventh FIFA Women’s World Cup kicked off.

While global soccer fans were more likely to tune into the Champions League final, one cannot discount the social and cultural significance of the Women’s World Cup: in fewer than 25 years, it has emerged from obscurity to become a major international sporting event. And while questions remain about the sport’s broad appeal beyond tournaments like the World Cup, the popularity of female club teams seems to be on the rise.

When the United States triumphed in the first Women’s World Cup in China in 1991, few in the global soccer community beyond the US noticed. Most people probably didn’t even realize the tournament had taken place.

Held almost stealthily in late November during the middle of most men’s soccer seasons, the muted (almost embarrassed) nature of this event was further marginalized by FIFA’s reluctance to bestow its official “World Cup” brand on the tournament. Instead, FIFA called it the “First FIFA World Championship for Women’s Football for the M&M Cup.”

Only 12 teams, divided into three groups of four, participated. Some organizers even proposed that women should play 80-minute games, as opposed to the standard 90-minute men’s games, and use a smaller ball. (Both ideas were quashed.) For the first time, FIFA did use female referees; however, with the exception of the third-place consolation game, they all served in the role of assistant referee.

Still, the tournament was deemed successful enough to incorporate women’s soccer into the 1996 Atlanta Summer Olympic Games. Nearly 77,000 spectators watched the US defeat China for the gold medal in Athens, Georgia, making it – at least for the time being – the most-watched women’s sports event in history.

Three years later, this record was shattered when 90,185 people watched these two teams square off in the World Cup final in the Rose Bowl, with the US prevailing yet again. This official attendance figure remains the largest crowd in history ever to watch a women’s sporting event.

The collection of essays Soccer, Women, Sexual Liberation: Kicking Off a New Era highlights the unprecedented ascension of women’s soccer between 1990 and 2003. Each of the chapters features a different country, but the story of women’s soccer in these nations is virtually identical: at first, men derided and ridiculed women who attempted to play the game – in some cases, even banning them from participating. But in the 1980s, there was a shift in public attitudes, and female athletes were accorded more rights and more opportunities to play the game.

As Steven L Hellerman and I argued in our contribution:

Change has already arrived and will increase with the passage of time. Whether women’s soccer will emerge victorious at the end of this transformative process nobody can tell with certainty.

So what’s happened in the decade since we wrote those words?

The best marker for a sport’s maturation is the increased competitiveness and leveling of the quality of play among the contestants. Whereas the first few World Cups witnessed the domination of the United States, Norway, Sweden, Germany and China – with a clear dropoff in play by most other contestants – this year’s tournament includes superb teams representing Australia, Canada, Brazil, France, Japan and the Netherlands. Many have even surpassed China, which has experienced a marked decline over the last few years.

The current tournament has been expanded to include 24 teams; the venues in Canada –- just like in Germany, four years ago – will be filled. All games will be televised internationally. Viewership is expected to be in the millions. Media reporting will be detailed, prompt and ubiquitous. And there will be large crowds gathering in public places to watch the games.

What does the future hold?

By many metrics, soccer has become an immensely popular sport in the US. From youth levels to adult leagues, slightly more than 19 million Americans played the sport in some capacity. And ten years ago, soccer surpassed all team sports, with the exception of basketball, in participation.

But playing a sport has only a tangential relationship to watching it. Millions of people run, hike, bowl; yet very few follow these sports on a regular basis beyond tuning in to the Olympics every four years.

So it’s quite likely that the majority of Americans who will be cheering for their team in Canada will do so because the players represent the US. In other words, most folks will be cheering for what Jerry Seinfeld so aptly called “laundry.” Very few really know these players’ past performances for their clubs, their statistics or even their names.

Will the enthusiasm that this tournament will surely garner –- especially among the fans of the tournament’s best teams – carry over beyond the tournament’s conclusion, and become a daily preoccupation, as it’s become for many fans of men’s clubs?

The key to this lies not in women’s soccer at the national level, but at the club level. It’s the latter that plays regularly, sometimes even twice a week. National teams generate huge – but fleeting – attention, whereas club teams have a prolonged, sustained presence.

For this reason, what delighted me much more than the crowds from the World Cup’s first games were the 17,147 fans who attended the UEFA Champions League Final between FFC Frankfurt and Paris Saint-Germain in Berlin’s Friedrich-Ludwig-Jahn Sportpark on May 13.

To be sure, this was not Berlin’s famed Olympic Stadium, where the men’s final between Barcelona and Juventus drew nearly 75,000 spectators. But the trend of rising spectatorship for each of the 13 Champions League finals in women’s soccer has been unmistakable, even if the average attendance rates for weekly matches in Germany’s top league barely exceeded 2,000 during this past year’s campaign. (In many cases, attendance hovered in the three-digit range.)

Nonetheless, with social media giving women’s soccer an outlet that can circumvent the mainstream media’s minimal coverage (now largely confined to the World Cup), the potential for the sport is very real.

And with the sport making huge leaps in a mere span of 25 years, fans should be optimistic about the sport’s continued growth over the ensuing two decades.

Andrei S Markovits is Professor of Political Science and German Studies at University of Michigan. 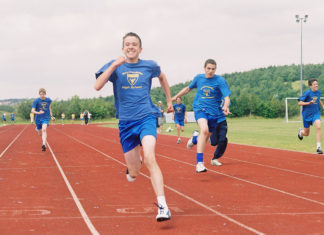 Why an autumn birthday could win you first place on sports...

Staff Writer - October 18, 2014
By Gavin Sandercock, University of Essex The playing field may not be level for school sports due to physical differences between children born in different...