Our job at The Conversation is to work with scholars to publish analysis that helps readers make sense of the world. And if we demolish a few popularly held – but erroneous or misplaced – ideas and assumptions in the process, that makes me especially happy.

Hence my list, here, of stories from 2018 that use facts to interrogate popular wisdom – and the ideas they proved wrong:

In an era when leading Republican political figures – from the president to a Supreme Court nominee – are accused of sexual assault, can women “both be Republican and insist upon women’s rights,” ask Rochester Institute of Technology scholars Christine A. Kray, Hinda Mandell and Tamar Carroll.

Yes, the scholars write. “Republicanism encompasses different visions of womanhood that allow women to feel that they can be Republican and also strong women.”

2. Kavanaugh will yank the Supreme Court far to the right

Brett Kavanaugh’s appointment to the Supreme Court was widely predicted to plunge the court – and American law with it – into a new conservative era. But, writes University of Oregon law professor Ofer Raban, “these prognoses fail to heed some fundamental distinctions among the decisions of the Supreme Court, and may create a mistaken impression of the court’s power and the inevitable trajectory of American law.”

Simply put, Raban wrote, “Supreme Court rulings are often not the last word on a matter.”

3. Campaign spending is ruining democracy in the US

Seventy percent of Americans believe there’s too much money in politics and that spending in elections should be limited. That includes both Democrats and Republicans, according to a recent Pew survey.

But campaign spending plays an important role in democracy, helping get candidates’ messages out and educating the public. Columbia Law School scholar Richard Briffault writes that “the volume of campaign spending is not the main problem with our campaign finance system. The real challenge for our democracy is where so much of this money comes from.”

“The private dollars that drive the system come from a tiny fraction of our society,” writes Briffault, from a donor class that is not “representative of the broader community whose interests are all at stake in an election.”

4. Trump is another Hitler

Taschka acknowledges that some historians have made legitimate comparisons of the “few striking similarities between the rise of fascism in Germany then and the current political climate in the United States.”

But, such comparisons are false equivalencies that “not only risk trivializing Hitler and the horrors he unleashed,” she writes, but “also prevent people from engaging with the actual issues at hand.”

On “an ordinary day” in 2011, writes criminal justice scholar Connie Hassett-Walker, she found her husband watching a firearms video. She sat down with him, and that moment was the beginning of five years of research into videos made by gun owners that culminated in a book.

“For all the noise around gun control versus gun rights, there was a story that was missed by non-gun owners like me: how much these guns mean to those who own them,” writes Hassett-Walker.

Americans live in a time of political polarization on a variety of social issues, she writes. “Both gun control and gun rights supporters would benefit from understanding how those with opposing political and social views see their identity and their culture.” 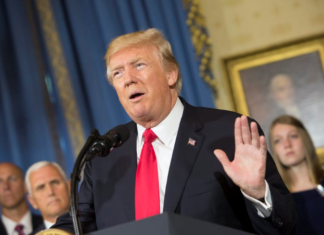