Andrew King-Ries, The University of Montana

For nearly a decade, I believed I was helping improve victims’ lives by prosecuting people who committed domestic violence in Seattle, Washington.

I aimed to advance the goals of the criminal justice system: Stop the violence, hold the defendant accountable and enhance the survivor’s safety.

Then, in 1996, I met a woman whose case would eventually shatter my view of what prosecution means for domestic violence victims. I’ll call her Marina, a pseudonym to protect her identity.

Over the past several years, I have spent hours reconnecting with Marina and a few other victims from the cases I prosecuted. I wanted to learn from victims how to reform the criminal justice system to better serve them.

Here’s what I learned.

The case that changed everything

Like many victims I met, Marina suffered gruesome violence at the hands of her boyfriend. Marina testified at trial that her boyfriend tried to rip out her tongue and that she believed his threats to kill her and her 10-year-old daughter. The jury agreed and convicted him.

At sentencing, I asked for prison time. Marina told the judge that she still loved her boyfriend, he was a good dad, and the violence was her fault. She begged that he not be incarcerated. The judge sentenced her boyfriend to five years and prohibited him from any contact with Marina or her daughter. To me, the prosecution was a complete success. Marina viewed it differently. Furious, she screamed at me, saying I had ruined her life.

Believing I was doing good, I brushed off Marina’s accusation. Later, it haunted me. Had I ruined her life, or had I helped her? I did not know because I did not see Marina again after sentencing. Twenty years later, I sat down with her and later with her daughter.

Today, Marina is afraid and alone. She is still dealing with her trauma and still hiding from her boyfriend who has since been released. She shuns intimate relationships for fear of more violence. Her daughter, now 31, lives in another state with two small children and has no contact with Marina. She has been in many abusive relationships, became addicted to meth and has tried to kill herself. Marina and her daughter are both alive, but the prosecution hardly looks like a success to me now.

Dumped by the system

Talking to Marina led me to contact a handful of other victims, and several themes emerged from those conversations.

Yes, I had done my job: Often the violence stopped and the victims survived. However, for all of these victims, trauma – not love – endured. Worse yet, every victim felt abandoned by the prosecution and left to manage that trauma on their own. For example, one victim told me she felt “dumped” after the trial.

Across the country, domestic violence survivors have access to a wide variety of services. The majority of the victims I spoke with accessed services after the prosecution and felt those services helped them. Marina, for example, found temporary housing for her and her daughter through a domestic violence organization. Other victims got counseling or mental health medications.

Unfortunately, these services are provided by a network of underfunded nonprofit organizations that the victim needs help to navigate. Meanwhile, courts only have control over defendants – they cannot order victims into treatment. That means current criminal justice reform efforts focus primarily on improving services for defendants.

The victims I spoke with were only able to access a portion of the services they needed and only through their own initiative. Often crucial needs, such as civil legal assistance, went unmet. Helping victims recover after the trial was never part of my job as a prosecutor. After each trial, I immediately moved on to the next case, the next defendant and the next victim.

Marina, and all the victims I talked to, told me that what they wanted but did not get was an ongoing relationship with the prosecution to help them heal.

Another victim I interviewed, someone I’ll call Steve to protect his identity, showed me how things might change.

Steve was one of my more challenging cases. Steve’s boyfriend smashed Steve’s head with a bottle. Several months later, he slit Steve’s throat. Even though Steve nearly died, he tried everything to avoid testifying, including committing himself to the psych ward during the trial – in response to his boyfriend’s manipulative mix of threats and expressions of love.

When his evasion efforts failed, Steve testified that he had cut his own throat. Fortunately, the jury saw through Steve’s ruse and convicted his boyfriend. I wasn’t sure Steve – who as a disabled alcoholic with AIDS, left homeless after his boyfriend’s violence caused his eviction – would have survived the years between his court appearance and when I tracked him down for an interview. Instead, I learned Steve’s AIDS actually saved him.

When he sought treatment for his condition after the trial, the AIDS clinic assigned Steve a doctor and a social worker who identified his needs. Over the next 15 years, they helped him with meals, medication, counseling, job training, substance abuse treatment, housing assistance and finding community. This case management approach is considered best practice response to the AIDS epidemic and is largely funded by the government. These are precisely the resources every domestic violence survivor deserves.

Prosecution and victim services should consider a case management model for victims after trial in which each victim would be assigned to a team. The team would include a prosecutor, victim advocate and social worker to assess needs and coordinate services. This could fulfill victims’ desire for continued contact with the prosecution and help victims recover from the trauma. Today, family justice centers are a step in this direction by locating a variety of service providers in a single location. What they are lacking is connecting victims with a specific team of individuals who are responsible for their care during and after their criminal case concludes.

This model will also have another benefit. Prosecutors must consider what happens after the gavel drops, not just for victims of domestic violence, but for their own sake.

Through this process, I discovered that I too carried the victims’ trauma. Because I had no contact with victims post-trial, they remained forever ingrained in my memory as they were in the courtroom. Reconnecting with the victims and learning about their lives after the prosecutions allowed me to relinquish some of their trauma. It helped me heal as well.

Andrew King-Ries, Professor of Criminal Law, The University of Montana 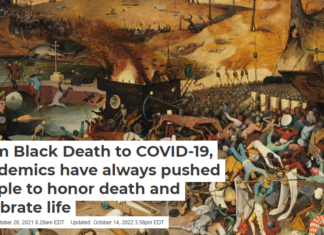 From Black Death to COVID-19, pandemics have always pushed people to...

Staff Writer - October 27, 2022
Nükhet Varlik, Rutgers University - Newark After the last couple of Halloweens were plagued by doubt and worry thanks...

What my tomatoes taught me about quantum mechanics