Beautiful people tend to have a lot more luck in the work world.

In part, this may be because companies believe consumers are more likely to buy things from beautiful employees, which is perhaps why retailers like Abercrombie & Fitch use looks as criteria in their hiring process.

There’s some evidence, however, that this worker “beauty premium” may be wearing off – at least when it comes to employees who interact with consumers. In television commercials, for example, retailers and other companies are increasingly using real people – with all their physical flaws – rather than photoshopped models to give their brands an “authentic” feel.

Research several colleagues and I conducted recently suggests that companies may be wise to take this approach with customers. Our studies show occasions where the beauty premium doesn’t hold – and can even backfire.

In our first study, we wanted to better understand how consumers respond to attractive service employees.

We invited 309 college students to read the same description of being served dinner at a restaurant and then look at an image of a person we described as their waiter.

Participants randomly viewed either a male or female server whose facial features were edited to depict high or low levels of attractiveness, based on prior research defining beauty. Separately, we used similar objective measures of attractiveness to rate participants on the same scale.

We then asked participants to rate the attractiveness of the server and how “psychologically close” they felt to him or her. Participants also graded customer satisfaction, the service quality and the likability of the waiter on a scale from low to high.

We found that how close a consumer felt toward the waiter correlated with how they rated the quality of service they received. That is, if they felt distance from the waiter, they were more likely to give him or her poor marks. Furthermore, we found that people who thought the server was attractive but were themselves not good-looking – using our objective beauty assessment – were more likely to feel distance.

We wanted to know whether this distance was actually more about how they perceived themselves than any objective measure. So we conducted a second similar study for which we recruited 237 people who were waiting to board a flight at China’s third-largest airport, located in Guangzhou. We asked them to read a scenario about receiving meal or other service from a flight attendant while aboard the plane and view a picture of the employee. Just as in the first study, participants randomly viewed either “attractive” or “unattractive” flight attendants.

They then rated the attractiveness of the attendant as well as themselves and indicated whether they believe there’s a connection between beauty and skill. They also rated the service received.

A third and final study, in which we surveyed consumers at a shopping mall who had just had a face-to-face encounter with a service employee, further confirmed the results of the first two. In each study, we found a clear connection between beautiful workers and unpleasant customer experiences for people who are less attractive.

So in a world that admires and hires beautiful people, our research suggests there’s a potential downside, at least in the service sector. 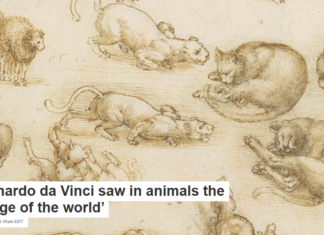 Leonardo da Vinci saw in animals the ‘image of the world

Staff Writer - April 13, 2019
Arielle Saiber, Bowdoin College About six months ago I stopped eating meat. I was teaching a graduate course at UCLA that investigated how Italian Renaissance...

Black bears adapt to life near humans by burning the midnight...

How even a casual brush with the law can permanently mar...