We are all economists with a keen interest in the interplay between risky behavior, crime and health.

Our analysis suggests that this rise in sexual assault during big college football games is likely due to the increased partying and alcohol consumption that accompany them. The results reaffirm the need for prevention strategies to address the negative effects of the college party culture and the role that alcohol plays in it.

Sexual assault on college campuses has gotten increased attention in recent years. Much of the attention has been spurred by research, such as a 2009 study that found that nearly one in five female seniors at two anonymous large public universities reported being sexually assaulted since entering college. That study found that “most sexual assaults occurred after women voluntarily consumed alcohol.”

We wanted to ask how much college events that lead to more partying and alcohol consumption also increase reports of rape. We chose to investigate the effects of Division I college football games, since these events have been shown to intensify partying and drinking on and near college campuses.

For our analysis, we used daily reports of rape to campus and local police departments serving schools with Division I football programs over a 22-year period, specifically from 1991 to 2012. We were able to identify agencies serving 96 Division I schools.

Using these data, we estimated how much rape reports went up on game days over and above the number expected on the day of the week the game is played.

We found football games increased the rate of reported sexual assaults with 17- to 24-year-old victims by 41 percent on home game days and 15 percent on away game days. The effects are larger for schools with prominent football teams and for big games, such as rivalry games and games against ranked opponents.

These effects seem to be due to increased partying and alcohol, rather than through some other mechanism associated with watching football, as we outline below.

Our study also shows that drunkenness, drunk driving incidents, liquor law violations and public order offenses are also elevated on game days. Our results indicate that home games increase arrests for disorderly conduct by 54 percent, drunk driving by 20 percent, drunkenness by 87 percent and liquor law violations by 102 percent over two days. Consistent with the estimated effects on reports of rape, we find that away games have smaller statistically significant effects.

Finally, we examined how the game outcomes influence the size of the effect. Games that have the largest effect on alcohol offenses – upset wins – also have the largest effects on sexual assault. It seems that when a team wins unexpectedly, fans party more intensely and drink more than usual, and this is accompanied by higher rates of sexual assault.

The estimated effects are also larger for universities that have reputations as “party schools.”

Much has been said about the benefits of college sports. But this comes at a cost. Our estimates indicate that Football Bowl Subdivision – previously Division IA – football games lead to 724 additional rapes of college-aged victims per year, or account for 5 percent of fall semester rapes of college-aged victims on and around college campuses. There is some evidence, though not nearly as clear, that there are also effects in lower division games.

Based on our results, we think it makes sense to take some of the revenue from big-time college sports, over US$10 billion in 2017, to help address the rise in sexual assaults that accompany big college games. This could be in the form prevention programs, victim support programs and research on which programs work best. 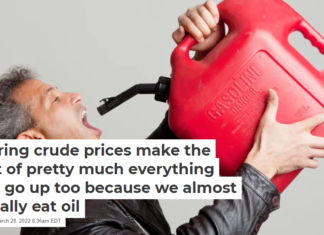 Staff Writer - March 28, 2022
Veronika Dolar, SUNY Old Westbury The price of oil has been spiking in recent weeks in response to concerns...

Yes, we really do want more politicians in the House of...