It has been 12 years since Botox was approved for the treatment of wrinkles. Botulinum toxin, one of the most potent toxins in nature, is also used to treat a number of health problems from neck spasms and uncontrollable eye blinking to migraine. But we’re still trying to understand how it works when it comes to pain relief.

We know that Botulinum toxin acts by paralysing the muscles, but we still don’t understand the exact mechanism when it comes to migraine and pain control. The authors of a new study to be published in Cephalalgia, suggest that the toxin is able to inhibit the way nerve cells bring information to the trigeminal nerve, responsible for face sensation and certain motor functions, respond to damaging stimuli, such as pain. Neurons in the trigeminal nerve, which also supplies nerves to cerebral blood vessels, have also been linked to headaches.

Botulinum toxin’s pain relieving effect has distinct mechanisms from those involved in muscle relaxation and the toxin can affect the release of many substances in the brain involved in pain. Data from studies in patients with painful neuropathies has also suggested that Botulinum toxin acts at the peripheral level, affecting sensory fibres that are spread out on our skin, inhibiting or decreasing how we perceive pain.

While studies have suggested Botox can help some patients with chronic migraine, other studies have suggested it may not be useful in treating other forms of headaches such as tension headaches and episodic migraine. Because migraine is a complex disease, involving a number of factors, some have argued that inhibiting nerves is not a complete answer, but in my clinical practice I’ve found that a large group of my patients who have received the treatment have said they’ve noticed some improvement in migraine frequency or intensity.

If you’ve ever had a migraine you might recognise some of the symptoms – a throbbing pain on the front or side of the head, visual disturbance, sensitivity to light and nausea. Migraines vary widely in their frequency, lasting from a few hours to a couple of days. They also vary in severity and the impact they have on a patients’ quality of life. For some with moderate-to-severe chronic migraines, defined as migraine attacks that last for more than 15 days in a month for at least three months, taking painkillers and turning off the lights isn’t enough. For these patients, Botox might be an effective treatment.

Migraine is a neurological disorder, thought to cause painful inflammatory substances around the nerves and blood vessels in the head. Although doctors can treat patients with medication as needed during an attack, frequent or prolonged and severe episodes often require (prophylactic) preventive drugs to decrease the occurrence and/or intensity of episodes and Botox has been on the market since 2000 as a preventive treatment.

The drug acts at the junction between the nerve and the muscle, blocking muscle contraction – and minimal amounts can be used to produce reversible muscle relaxation, which is why it is widely used as an anti-wrinkle treatment. It only works temporarily because nerve terminals regenerate, which allows the muscle to contract again.

The standard technique involves 31 injection areas across the head and neck, including muscles in the forehead, temporal areas, over the back of the head, and muscles of the neck and the muscles between the shoulders.

Data from clinical trials have also confirmed the efficacy, safety, and tolerability of the toxin for use in treating chronic migraines in some adults. One large randomised, double-blind study, known as the PREEMPT study, showed that Botox significantly improved multiple measures related to the headaches such as frequency and intensity, leading to less missed days of work, less “as needed” medications and less emergency room visits. It also showed an improvement in headache-related disability compared with a placebo. The study, which was funded by Allergan (a Botox company), informed the number and method of injections that doctors use (and, interestingly, we give them at similar sites to where acupuncturists put their pins when treating headaches).

One of the challenges that I’ve encountered is the cost of the drug. The drug costs about US$10 per unit and as current guidelines for treatment suggest at least 155 units per treatment, that certainly builds up. In the UK, Botox was made available to treat chronic migraine sufferers in 2010 and has been available on the National Health Service since 2012, at an estimated cost of about £350 for a 12-week treatment.

In the US, not all patients are able to obtain approval from their health insurers and for the past two years I have not been able to treat patients that are under Medicaid, the programme that covers those on low incomes.

If we take into consideration the number of days that patients miss work or the days of decrease productivity at work due to the headaches, I think the treatment is not expensive – particularly when you take into account the expense of other treatments, for example triptans: specific drugs for migraines that are used by patients during an attack. Some of my patients take these at least three times a week. Sumatriptan, the first triptan developed, costs approximately US$30 per tablet, so ongoing costs here can also build up. In reality, if you weigh the cost and the benefits, I believe that Botox should be considered and used when indicated. The more we know about how and why it works the better it will be for targeting treatment better for patients.

Maike Tiede Blaya does not work for, consult to, own shares in or receive funding from any company or organisation that would benefit from this article, and has no relevant affiliations. 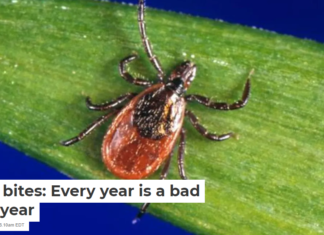 Tick bites: Every year is a bad tick year

Staff Writer - August 18, 2021
Jory Brinkerhoff, University of Richmond It’s summer, a time to hike, garden, vacation – and to be on the...

Food is poised to get a lot more expensive, but it...