More than 230 of the world’s wealthiest people, including Elon Musk, Bill Gates and Warren Buffett, have promised to give at least half of their fortunes to charity within their lifetimes or in their wills by signing the Giving Pledge. Some of the most affluent, including Jeff Bezos – who hadn’t signed the Giving Pledge by early 2023 – and MacKenzie Scott, his ex-wife – have declared that they will go further by giving most of their fortunes to charity before they die.

This movement stands in contrast to practices of many of the philanthropists of the late 19th and early 20th centuries. Industrial titans like oil baron John D. Rockefeller, automotive entrepreneur Henry Ford and steel magnate Andrew Carnegie established massive foundations that to this day have big pots of money at their disposal despite decades of charitable grantmaking. This kind of control over funds after death is usually illegal because of a you-can’t-take-it-with-you legal doctrine that originated 500 years ago in England.

Known as the Rule Against Perpetuities, it holds that control over property must cease within 21 years of a death. But there is a loophole in that rule for money given to charities, which theoretically can flow forever. Without it, many of the largest U.S. and British foundations would have closed their doors after disbursing all their funds long ago.

As a lawyer and researcher who studies nonprofit law and history, I wondered why American donors get to give from the grave.

Henry VIII had his eye on property

In a recent working paper that I wrote with my colleague Angela Eikenberry and Kenya Love, a graduate student, we explained that this debate goes back to the court of Henry VIII.

The Rule Against Perpetuities developed in response to political upheaval in the 1530s. The old feudal law made it almost impossible for most properties to be sold, foreclosed upon or have their ownership changed in any way.

At the time, a small number of people and the Catholic Church controlled most of the wealth in England. Henry VIII wanted to end this practice because it was difficult to tax property that never transferred, and property owners were mostly unaccountable to England’s monarchy. This encouraged fraud and led to a consolidation of wealth that threatened the king’s power.

As he sought to sever England’s ties to the Catholic Church, Henry had one eye on changing religious doctrine so he could divorce Catherine of Aragon, and the other on all the property that would become available when he booted out the church.

After splitting with the church and securing his divorce, he enacted a new property system giving the British monarchy a lot more power over wealth and used that power to seize property. Most of the property the king first took belonged to the church, but all property interests were more vulnerable under the new law.

Henry’s power grab angered the wealthy gentry, who launched a violent uprising known as the “Pilgrimage of Grace.”

After quelling that upheaval, Henry compromised by allowing the transfer of property from one generation to the next, but did not allow people to tell others how to use their property after they died. The courts later developed the Rule Against Perpetuities to allow people to transfer property to their children when they turned 21 years old.

At the same time, wealthy Englishmen were encouraged to give large sums of money and property to help the poor. Some of these funds had strings attached for longer than the 21 years.

Elizabeth I codified the rule

Elizabeth I, Henry VIII’s daughter with his ill-fated wife Anne Boleyn, became queen after his death. She used her reign to codify that previously informal charitable exception. By then it was the 1590s – a tough time for England, due to two wars, a pandemic, inflation and famine. Queen Elizabeth needed to prevent unrest without raising taxes even further than she already had.

Elizabeth’s solution was a new law decreed in 1601. Known as the “Statute of Charitable Uses,” it encouraged the wealthy to make big charitable donations and gave courts the power to enforce the terms of the gifts.

The monarchy believed that partnering with charities would ease the burdens of the state to aid the poor.

This concept remains popular today, especially among conservatives in the U.S. and U.K.

When the U.S. broke away from Great Britain and became an independent country, it wasn’t always certain that it would stick with the charitable exception.

Some states initially rejected British law, but by the early 19th century every state in the U.S. had adopted the Rule Against Perpetuities.

In the late 1800s, scholars started debating the value of the Rule Against Perpetuities, even as large foundations took advantage of Elizabeth’s philanthropy loophole. As of 2022, my co-authors and I had found that 40 U.S. states have ended or limited the rule and that every jurisdiction, including the District of Columbia, permits eternal control over donations.

Although this legal precept has endured, many scholars, charities and philanthropists question whether it makes sense to let foundations hang onto massive endowments with the goal of operating in the future in accordance with the wishes of a long-gone donor rather than spend that money to meet society’s needs today.

With such issues as climate change, spending more now could significantly decrease what it will cost later to resolve the problem.

Still other problems require change that is more likely to come from smaller nonprofits. In one example, many long-running foundations, including the Ford, Carnegie and Kellogg foundations, contributed large sums to help Flint, Michigan, after a shift in water supply brought lead in the tap water to poisonous levels. Some scholars argue this money undermined local community groups that better understood the needs of Flint’s residents.

Another argument is more philosophical: Why should dead billionaires get credit for helping to solve contemporary problems through the foundations bearing their names? This question often leads to a debate over whether history is being rewritten in ways that emphasize their philanthropy over the sometimes questionable ways that they secured their wealth.

Some of those very rich people who started massive foundations were racist and antisemitic. Does their use of this rule that’s been around for hundreds of years give them the right to influence how Americans solve 21st-century problems? 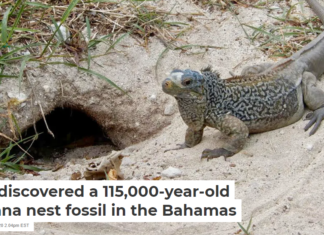 We discovered a 115,000-year-old iguana nest fossil in the Bahamas

Protecting 30% of Earth’s surface for nature means thinking about connections...