Lt. Gov. Ralph Northam, a mild-mannered physician from Virginia’s eastern shore, led the ticket with a platform focused on women’s reproductive rights, climate change and racial justice. He defeated Republican Ed Gillespie with just under 54 percent of the vote.

Northam saw particularly strong support from a diverse population of suburban voters in Arlington, Fairfax and Loudoun counties, where Virginia’s Confederate history figures less prominently than in the state’s more rural and southern parts. Black voters in Tidewater and Richmond, the capital, also rallied around Northam.

The Democratic candidate for lieutenant governor, Justin Fairfax, drew his base from the same areas. He beat out Republican House of Delegates member Jill Vogel, 53 percent to 47 percent. Fairfax will be the first black politician to hold statewide office in Virginia since former Gov. Douglas Wilder became lieutenant governor in 1985.

Fairfax, who has never held elected office, is now in a position to follow the path of Governor-elect Northam and seven other Virginia lieutenant governors who’ve risen to the state’s highest office. If he were to do so, he would become only the second African-American ever to lead Virginia.

Race is never an afterthought in southern politics. And in Virginia’s election, it was a central factor. As a political analyst who focuses on race, I interpret this Democratic triumph as a sign that the Old Dominion has entered a new era – one characterized by definite urban-rural divisions.

Republican Ed Gillespie, a Washington lobbyist who almost defeated incumbent senator Mark Warner in 2014, knows this. So he ran a campaign clearly aimed at appealing to the Trump base throughout rural Virginia.

Gillespie also attacked Northam on Gov. McAuliffe’s policy of restoring the voting rights of former felons, and he opposed sanctuary cities. Gillespie ran television ads implying that immigrants would join violent gangs like MS-13, which did not play well in liberal urban areas.

In heavily black cities like Norfolk and Hampton, too, Northam saw a robust win. Statewide, 87 percent of black voters and 67 percent of Latino voters supported the Democratic candidate.

Even before polls officially closed at 7 p.m., it was clear that this diverse coalition of black Virginians, northern Virginia suburbanites and city-dwellers had become a powerful voting bloc. Together, these communities put Northam, Fairfax and over a dozen Democratic General Assembly delegates into office.

This strong Democratic showing suggests that Virginia is entering a new era.

History is the foundation of the Old Dominion, one of America’s 13 original colonies. However, in my assessment, the 2017 gubernatorial election proved that forward-thinking Virginians now place a greater value on the future than on the past.

Although it is a southern state, Virginia rejected ads that sought to racially divide and frighten the electorate. Even the rallying cry of the Confederate flag and Civil War monuments did not deter voters from writing new history. With little fanfare, the state carried a black attorney into the office of lieutenant governor.

This Democratic shift is only likely to grow. I believe rural Virginia voters will gradually lose their political clout – even in the representative General Assembly – as lack of jobs continues to shrink the rural population.

The big question now is whether the Democrats’ victory in Virginia portends a national trend. In 2018, 36 states and three territories elect governors. More than 30 senators will face election.

I see Virginia’s “off-off-year” election as a repudiation of Trump’s policies. The state showed that African-Americans, suburbanites and millennials could be the vanguard of future Democratic contests. Next year, all America will find out if Virginia was the start of something bigger. 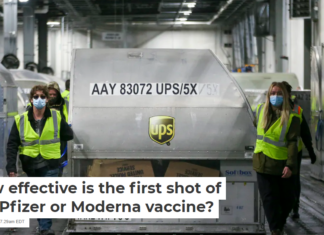 Staff Writer - March 24, 2021
William Petri, University of Virginia As the COVID-19 vaccines reach more people across the country, some people have asked:...

How to combat racial bias: Start in childhood

Buying gifts? Why ‘buy now, pay later’ could be a dangerous...

What did billions in aid to Afghanistan accomplish? 5 questions answered