Young Adult (YA) dystopia stories have never been more popular, and today’s release of Insurgent – the second film in the Divergent series – is only the most recent example.

This series has inspired popular trends like Divergent-themed personality tests, self-defense training and even tattoos (out of stock!).

Meanwhile, books like Legend, Under the Never Sky, Matched and Blood Red Road have all spawned trilogies and been optioned for movies. And beyond the traditional fare of toys, dolls and costumes, The Hunger Games series – especially Katniss, the “girl on fire” protagonist – has inspired archery lessons, make up campaigns, birthday cakes and fashion spreads.

Clearly, YA dystopia is having an effect on consumerism and pop culture. Media coverage, however, will still often center on romantic elements of the genre’s books and movies: the relationships and crushes among various characters. It also tends to discount the genre as a whole because of the film adaptations.

But it’s the political potential of this literary phenomenon – especially for empowering girls – that could ultimately be the genre’s most profound and lasting influence. And though its staying power has yet to be tested, YA dystopia has spurred legions of readers towards promoting social justice.

Unlike past young adult series geared towards teen girls – The Babysitter’s Club, Clueless, Twilight – these books are about more than love triangles, hairstyles or popularity.

Instead, the YA dystopia genre, as a whole, does what all great science fiction – from Brave New World to Mad Max – sets out to do: it holds up a mirror to our world, acting as a tool for social critique.

As many have noted, these dystopian futures are not so distant. Today, we face many of the same problems contained in these fictional worlds: violence against women, climate-related catastrophes, extreme inequalities in wealth and impenetrable power structures.

Many YA dystopia books feature girls who buck the conventions of our world as much as theirs, challenging gender roles and expectations. For example, their female protagonists often take on traditionally masculine roles. Instead of acting as bystanders or caretakers, they fight, investigate, infiltrate, rescue, protect, journey and lead.

This isn’t the case in the popular vampire-themed Twilight series, where protagonist Bella Swan is often a passive player. But in YA dystopia novels, female characters like Cassia (in Matched) and Eve (from the Eve series) refuse to obediently accept the hand that’s been dealt to them.

Most of these books begin with a girl protagonist experiencing and discovering the corruption and injustice of society. From there, she has to navigate just to survive. These girls are beaten and bruised, shot and burned, starved and oppressed, manipulated and used. But they do more than simply survive.

In Birthmarked, Gaia’s facial scar keeps her from being adopted into the Enclave, a society separated from her community by a wall. Gaia’s parents are arrested, which leads Gaia to discover that life inside the wall is not as ideal as she imagined it to be. Rather than accept the status quo, like all “girls on fire” she fights back: first by going inside the wall to try to find her parents, and then by protecting her baby sister from the Enclave.

The Summer Prince’s June is an artist competing for a prestigious prize. But when she discovers that the price she will have to pay to win includes not only her integrity, but also the continued subjugation of the lower class, she turns her art into a political weapon.

Both Gaia and June become leaders in ways that real girls and women in the U.S. rarely do. Possessing agency and power, characters like Gaia and June act as voices for the the oppressed masses.

Like other areas of pop culture, children’s literature continues to be dominated by white, male characters. In response, Malinda Lo and Cindy Pon created Diversity in YA in 2011. Last year, a number of bloggers, authors and academics launched the campaign #WeNeedDiverseBooks.

They’re concerned because a lack of diversity fails to accurately represent a changing world – a travesty in the realm of dystopian fiction where a whitewashed future is illogical, at best.

While the most well known works in YA dystopia – The Hunger Games, Divergent, Uglies – feature white or racially ambiguous girls as their protagonists, many science fiction and dystopian YA novels complicate the ways in which race is imagined, or, rather, ignored.

Victoria Law’s column for Bitch Magazine has also brought attention to girls of color in dystopia, books that continue to be marginalized in the mainstream.

Trilogies like Partials, Legend, and The Immortal Rules explicitly mention non-white racial features and ethnic heritage, though these aspects are of little thematic importance. But other books —- the Tankborn series, Shadows Cast By Stars, Orleans, The Summer Prince – center on characters whose experiences are shaped by their racial and ethnic heritages in new, dystopian contexts.

Ultimately, these characters give voice and agency to girls of color in fiction and reality, providing an outlet that’s sorely lacking in other corners of YA literature.

The radical politics of YA dystopia have even seeped off the page. For example, adults and young adults alike are finding value in the ideas and symbols provided by The Hunger Games, many of which have been co-opted for real-life protests and social movements.

The AFL-CIO brings attention to poverty and the need for social justice through its “We Are the Districts” campaign – a reference to districts that revolt against the Capitol of Panem in The Hunger Games. And in Korea, a young woman and her friends were detained after holding up the Hunger Games’ three-finger salute to protest their authoritarian government.

Finally, the symbol of the “girl on fire” has empowered girls in the US – and even around the world. In Kenya, the Girls on Fire Leadership Camp draws inspiration from singer Alicia Keys, giving at-risk girls an opportunity to “experience their country for the first time” and to “view themselves as part of the solution and unlock their full potential as young leaders and change makers.”

When it comes to the ideas, practices and possibilities that stem from YA dystopia, it doesn’t matter that they originate in fictional works.

Real or not real, these characters, stories and settings ask to us to think about the past, present and future, to imagine new possibilities and opportunities for the marginalized and oppressed – and to even take to the streets. 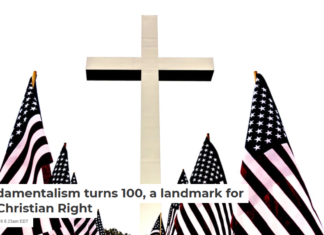 Staff Writer - October 10, 2019
William Trollinger, University of Dayton These days, the term “fundamentalism” is often associated with a militant form of Islam. But the original fundamentalist movement was actually...