Using Bluetooth wireless networking to send information to nearby smartphones, beacon technology could transform how retailers engage with their customers. But customers will notice how their information is used to personalise these unsolicited adverts, and companies that fail to respect their privacy may get burned.

UK retailer House of Fraser is to introduce beacon-equipped mannequins to its Aberdeen store, which will deliver details about the clothes and accessories the mannequin is wearing to the smartphones of customers within 50 metres. In London’s Regent Street, around 100 stores have installed Apple’s iBeacons, able to send adverts to smartphones to entice passers-by to come inside.

A sort of precursor to the “internet of things”, beacon technology has great potential to enhance consumer experience: providing access to relevant information more quickly, or offering rewards and discounts for loyal shoppers. Some retailers may rearrange their store based on analysing data from customers’ shopping habits. It has uses outside of marketing too, such as providing contactless payments, tourist information at museums, or gate information at airports.

But beacons have drawbacks: humans have only one focus of attention, and beacon notifications can distract from other activities. The problem of distracted walking from people engrossed with their phone, and not looking where they are going, has already resulted in pedestrian casualties. Phones are already a major distraction while driving and beacons could make this worse unless implemented carefully.

Rising consumer debt is also a major problem. For those able to control their impulses, beacon ads may simply be a nuisance. But for those with a tendency toward impulsiveness they may trigger unaffordable spending sprees. Will payday lenders push their beacon ads straight to those who enter the shops?

The problem for developers is that it’s incredibly difficult to know how people will react to a new technology until they actually experience it. Many companies have conducted survey research to explore attitudes towards beacons, but this only reveals how consumers think they will feel and act. Research on privacy preferences, for instance, found that people often reveal information they previously said they wanted to keep private.

At UCL, we specialise in conducting “Wizard of Oz” studies, where we mimic the features of future technologies and collect data about users’ thoughts and experiences. From these experiments we’ve come away with two insights about what beacon technology may bring.

The first is that whether or not a tailored advert sent by a beacon is accepted or not depends highly on a person’s emotional state at that time, which is pretty much impossible to predict.

In one study, we sent tailored ads to the smartphones of 20 professionals over five consecutive days, tailored to their personal profiles and geographic location (derived from GPS). When they received the ad, participants were asked to record how they would have responded. We found participants’ decision to accept or reject an ad was driven by their specific needs at that exact time. On a relaxed day, they were happy to receive the ad; on busy days, the same ad was perceived as a nuisance.

This reveals a major problem for smartphone advertising: to be effective, personalising an advert requires fine-grained data on the customer’s emotional state and the context of the moment. This data is highly sensitive and should be protected from unauthorised use. To work around this, we suggest users should be able to customise the advertising service they receive, for example by choosing which information to disclose, when to receive ads, and of what type. The system also needs to learn from feedback: if users are more receptive to ads at certain times, days, or locations, it learns to recognise those contextual factors and adapt the ad service accordingly.

The second insight is that personalised ads are more likely to be noticed, but that does not mean that users will like them. In fact they could well even resent the companies responsible.

In another study we explored students’ responses to personalised adverts. We asked 30 participants to complete a simulated holiday online booking, with each page showing ads personalised to different degrees. Tracking participants’ eye movements we found they focused on ads twice as long when they contained their photo. They also felt increasingly uncomfortable as the degree of ad personalisation increased. They felt the ads, personalised by trawling and using data available online, were creepy. In fact, they were sufficiently put off by the experience that it undermined their trust in the fictitious travel company, reporting they would not use the site again.

So the effects for retailers of bringing in beacons are not clear-cut, and if companies push users too far, they will lose them altogether. Retailers need to be upfront and transparent about what data they collect and how it used, and allow users to easily opt out – in fact ideally users should have to opt in, rather than finding it forced upon them.

Transparency and choice will be key if beacon technology, at least as used in retailing and marketing, is to have a future. If they feel stalked and manipulated, rather than being switched on to the prospect of new purchases, customers will switch off altogether.

M Angela Sasse receives funding from the TSB and EPSRC for the Privacy Value Networks project.

Charlene Jennett does not work for, consult to, own shares in or receive funding from any company or organisation that would benefit from this article, and has no relevant affiliations. 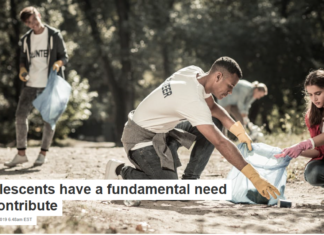 Staff Writer - February 15, 2019
Andrew J. Fuligni, University of California, Los Angeles No longer children but not yet adults, adolescents need opportunities to learn and prepare for their entrance...