Eric Greitens has resigned, finally. The former Missouri governor’s sex scandal didn’t force him to step down, but rather allegations that “dark money” improperly financed his winning gubernatorial bid.

During the years I’ve spent writing about the topic, I’ve seen an uptick in political dark money. As a result, it’s getting harder for voters to identify exactly who is trying to influence their vote.

Dark money is political cash from a concealed source. This anonymity often happens because a donor’s political money passes through a nonprofit on its way to support a candidate. Dark money is the opposite of the transparent political spending that happens when donors openly support political action committees, political parties and candidate campaigns.

Investigative journalist Bill Allison coined the term when he worked at the Sunlight Foundation in 2010. It quickly entered the political lexicon, partly because of a best-selling book on the topic by The New Yorker’s Jane Mayer.

Typically, political money goes dark when it is funneled through social welfare organizations – commonly known as 501(c)(4) nonprofits because of the relevant section of the tax code – or trade associations that are also called 501(c)(6) nonprofits.

Political money can also hide when it is obscured through limited liability companies, or LLCs. In some cases, these companies are created solely to obscure the source of political spending.

The obscurity inherent in all dark money transactions makes them hard to follow and to keep track when they get politicians into hot water.

For instance, Greitens announced he would resign within hours of a judge ordering that the real identities of the backers of a social welfare group called A New Missouri Inc. be made public. His exit came amid impeachment proceeedings related to the alleged misuse of another nonprofit’s donor list, for which he faced a felony charge.

A New Missouri, which the governor’s close political advisers created in February 2017, operates out of the same building as his campaign committee. There are some people who work for both entities, according to the Kansas City Star.

All told, the Greitens campaign may have benefited from US$6 million in dark money during his 2016 election, one of his former aides has estimated.

Investigators are trying to learn if any of the donors to the secretive groups supporting Greitens were foreigners. That would violate federal laws, which only allow Americans to finance political activities.

Greitens has admitted no wrongdoing, insisting he had “not broken any laws, nor committed any offense worthy of this treatment” despite acknowledging that his behavior had not been “perfect.”

The governor’s claim of innocence may not be that far-fetched.

Federal law actually permits the use of dark money in federal elections. Some politicians and political operatives prefer undisclosed spending because the IRS typically keeps nonprofit taxpayer information confidential and the Federal Election Commission’s rules don’t require disclosure either. If a political spender had spent the same funds through a PAC instead of a nonprofit, then the money would be fully reportable.

Political spenders that spend more than $200 on independent expenditures or put more than $10,000 into ads known as “electioneering communications” must report these outlays to the FEC every electoral cycle. But because that agency does not require every entity that spends money influencing elections to name their donors, political money can legally remain in the “dark.”

Meanwhile, each state has its own political spending disclosure rules. To get a sense of how good or bad your state’s campaign finance disclosure is, you can see how the National Institute on Money in Politics graded them a few years back.

The surge in dark money is a negative development because it thwarts both democratic accountability and responsibility within corporations, which are suspected as being the sources of dark money without informing shareholders that corporate money is being spent on politics. Moreover, dark money can be a perfect cover for illegal foreign spending in American elections. Not everyone agrees with me. Others find anonymous political spending appealing.

Since the Supreme Court’s 2010 Citizens United v. FEC ruling, which deemed political spending limits on businesses and unions to be unconstitutional, an estimated $800 million in dark money has been spent in federal elections, according to the Center for Responsive Politics’ Open Secrets database. Based on what I learned while writing my book “Corporate Citizen? An Argument for the Separation of Corporation and State,” I would not be surprised if the total were to hit $1 billion by the time voters cast their ballots in the 2018 mid-term elections.

And the use of nonprofits to hide political slush funds is only growing. A recent report from the Brennan Center, a think tank housed at the New York University Law School, found that at least two presidents, seven governors – including Greitens – and several mayors have established nonprofits that let them raise unlimited, anonymous funds for political spending while in office.

What some states and Congress are doing

Some states have taken steps to diminish the role of dark money in state elections.

California enacted the California Disclose Act in 2017 to improve disclosure. Maryland has a requirement that corporations tell shareholders about their political spending.

At the same time, some states have eased the flow of dark money. For example, Arizona passed a law preventing its cities from fighting dark money, and Wisconsin relaxed its campaign finance laws in 2015.

And Congress has done nothing to improve federal disclosures in elections. This leaves voters in the dark as they choose among candidates in the midterm elections. Unless Missouri tightens up its disclosure rules, the state’s voters may elect their next governor without knowing who is actually supporting the candidates on the ballot. 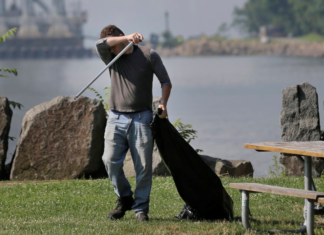 Staff Writer - September 15, 2019
Paul Vanouse, University at Buffalo, The State University of New York During steamy days, a body’s physiological response may cause you to wrinkle your nose:...

Watching a coral reef die as climate change devastates one of...