A film about the Obamas which will dramatise their famous first date one summer afternoon in 1989 is planned. The news has unsurprisingly set tongues wagging and left some mouths agape. Is it not cheap and tawdry to mix high office with box office? You might think so, but if you do, credulous reader, think again.

Some imagine that the rot set in with the famously cinematic presidency of John F Kennedy. Kennedy deliberately and self consciously cultivated a film star image. He was known to associate with the Hollywood elite including Frank Sinatra and, of course, Marilyn Monroe. His sister married “Rat Pack” member Peter Lawford. Ted Sorensen, Kennedy’s main speech writer, portrayed Kennedy as a headline star.

In addition to the grooming and stage lighting used to enhance Kennedy’s cinematic profile, Sorensen penned lines that central casting would die for. Most famously, he had Kennedy, in his inaugural address, speak in the tongue of a latter-day Caesar, by declaring to the crowd and, more importantly, to the TV viewing public at home: “Ask not what your country can do for you; ask what you can do for your country.”

But Kennedy by no means set the ball rolling. In fact, Washington DC has been star-struck for nearly a century. Long before Camelot, the presidency was inflected by a cinematic brand of leadership. Since the days of Warren Harding, Herbert Hoover and FDR at least, the line between the presidency and the film studio has sometimes been a thin one.

In the early 20s Harding was carefully orchestrating film coverage of visits to the White House by movie stars such as Mary Pickford. These were vote-getting opportunities. The impression was conjured that Harding and Pickford were old familiars who enjoyed regular tête-à-têtes. The president and his advisers had turned poachers, intent on grabbing a bit of the glamour from the Hollywood silver screen and making it rub off on them.

Harding was hardly singular in this respect. Later in the decade, Hoover regularly invited Hollywood moguls and movie idols of the jazz age to the White House. He posed with them in photographs and film reels to gain public attention and approval.

Roosevelt continued the practice, and also learned much from the theatrical cult of presidential personality pioneered by his Uncle, Theodore Roosevelt. FDR was arguably the first president to consciously play the role of national leader in an actorly way, using the tricks of Hollywood to enhance his persona. His presidency was characterised by close-up addresses to the American people, and he deliberately limited the vocabulary he used in his fireside chats with radio listeners so as to maximise audience impact. His trade-mark use of the phrase “my friends” established the sort of cosy, screen intimacy that was familiar to viewers of Hollywood Westerns and urban big city mortality tales.

And this tango between Hollywood and the White House has continued to more recent times. When Bill Clinton famously declared to the camera during the fall out from the Monica Lewinsky scandal “I did not have sex with that woman”, it might have been a deleted scene spoken by Dustin Hoffman from the smash-hit Kramer vs. Kramer. In George W Bush’s so-called “Bullhorn speech” delivered while striding through the rubble of the World Trade Center after 9/11, he confided to the crowd: “I can hear you, the rest of the world can hear you and the people who knocked these buildings down will hear all of us soon.” It might have been a line from Bruce Willis in the Die Hard franchise.

So might it be more audacious, but the idea of a movie telling the story of when Barack met Michelle joins a long line of American party politics. It makes full use of the power of the Hollywood machine to build political capital. The effect aimed for is presumed intimacy. By humanising the president through screen devices of various sorts, audiences identify with the leader. They may be more likely to cast their votes for him and his party, when the time comes.

You might think this objectionable because it creates an illusion of emotional closeness. But routinely, party politics trades in – and exploits – illusions of personal closeness. Just as Jean Baudrillard controversially and famously declared that “The Gulf War Did Not Take Place”, you can be sure (when and if it comes), that the cinematic version of when Barack met Michelle will not observe the letter of history. It will bear the director’s touch of crowd pleasing sentimentality and the longueur of tinsel town.

We see our leaders with our eyes, but we view them through a screen. It is naïve to suppose that presidents and their advisers do not know that their public persona is acutely televisual and cinematic. Political power depends upon attention capital – and nowhere understands attention capital better than Hollywood. 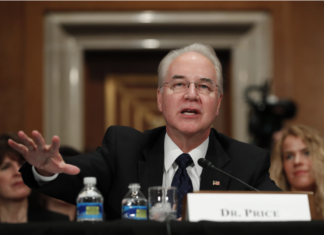 Staff Writer - January 20, 2017
Miranda Yaver, Yale University It is hardly unusual for Cabinet nominees to leave more questions than answers after their confirmation hearings. Yet for the millions...

This god shoots love darts – but no, it’s not Cupid