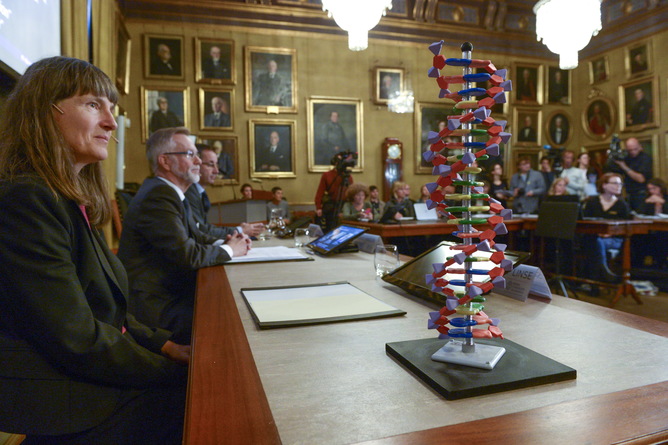 The Nobel Prize in Chemistry for 2015 has been awarded jointly to Sweden’s Tomas Lindahl, USA’s Paul Modrich and Turkish-born Aziz Sancar for their discoveries in the field of natural DNA repair.

Natural DNA repair is necessary for our survival. Every day, damage occurs to our DNA, whether from external factors such as UV light, smoking, radiation or carcinogens or from the natural mistakes that happen continuously in replication of such large amount of code. If these mistakes were not repaired the DNA would decay into chaos – a word not usually a good sign for successful biology.

Lindahl, Modrich and Sangar beat off strong competition from the team behind the genome editing technique CRISPR/CAS9 which many had been considered the strongest contender in the area of molecular biology.

Tomas Lindahl: Challenging the early thinking that DNA is stable, Lindahl who currently works at the Francis Crick Institute and Clare Hall Laboratory in the UK showed that mistakes and problems occur much more often than is possible for life to develop on Earth without repair mechanisms.

He then went on to discover one of these mechanisms, base-excision repair, which removes incorrect bases from the genome and replaces it with the correct one (see video below).

Paul Modrich:Working closely with Matthew Meselson from Harvard University, Modrich, now at Duke University in the USA, was interested in DNA signalling and repair. They noticed that mismatched DNA (for example adenine (A) being paired with cytosine ( C ) instead of thymine (T)), which can happen during DNA replication and recombination, can be naturally repaired by a mechanism called “DNA mismatch repair”.

This is triggered when a specific signalling unit, a so called “methyl group” (consisting of three hydrogen atoms bonded to a carbon atom) is not present. These methyl groups act as signposts, helping a particular restriction enzyme to come and cut the DNA strand at the correct location to repair it.

Aziz Sancar: Sancar’s story is a screenwriter’s dream. He was a trained and practising physician who was so interested in biochemistry that he decided to retrain. He was forced into a technician job at Yale University after being unable to secure a postdoctoral research position. While at Yale, he discovered the mechanism by which the enzyme exinuclease finds the UV-damaged DNA and cuts the strand, allowing it to be replaced with non-damaged bases by DNA polymerase.

The discovery of the mechanism, which he called “Nucleotide Excision Repair”, led to a job offer of an associate professorship at the University of North Carolina, where he remains today. Aziz Sancar is the first Turkish winner of a Nobel Prize.

These discoveries are hugely important as they deepen our understanding of how we function at a basic biochemical level. Understanding of these mechanisms is essential in the development of new treatment types for an endless number of diseases which have an effect on human DNA.

This certainly applies to cancer treatments, because many anti-cancer drugs actually damage DNA. So when developing a new drug, it is crucially important to know whether cancer cells can repair these damages.

When announcing the prize, Claes Gustafsson, a member of the Nobel assembly, commented that there are now drugs being developed based on knowledge of cancer cells that have a defect repair system. By learning from this, they are trying to find ways to actually inhibit repair in cancer cells to be able to destroy them. “This is a very interesting concept that is currently being developed and I think there are a number of different pharmaceutical industries that are currently looking into this,” he said.

As usual, the Nobel Prize committee is never far from controversy. The award of the Nobel Prize in Chemistry to scientists working in molecular biology may cause many chemists to question the decision, especially as it seems to be happening more and more.

But you can also look at it in the opposite way and actually celebrate the fact that chemistry has gone straight to the heart of so many scientific fields. If we want to deliver on Alfred Nobel’s will to bestow “prizes to those who… have conferred the greatest benefit on mankind” then it is certainly right that we’re looking at all the applications of chemistry.

It also can’t be left unsaid that the tradition of under-representation of women in the Nobel Prize for Chemistry unfortunately continues, with only four winners since 1901.

How the Dalai Lama is chosen and why China wants to...

Why we choose terrible passwords, and how to fix them