There’s been a lot of discussion about obesity this week. Whether or not it’s a disease (as it is in the USA now) and how this label would positively or negatively influence action taken by society and governments in addressing this large and growing burden.

This conversation is important, but I have noticed very often it ends with confusion. Questions around why we begin talking about obesity – and end discussing mental health, cancer, heart disease or diabetes. To make things even more confusing, the term ‘Non-Communicable Diseases’ might even be mentioned.

So what is the link between all of these diseases, and why can we not have a discussion about obesity, without talking about a range of seemingly unrelated ailments?

Well the reality is that all these diseases are actually highly interrelated. Obesity, diabetes, heart disease, cancers, lung diseases and mental illness (all combined are called Non-Communicable Diseases, or NCDs) largely share the same drivers or “risk factors.” Things like an unhealthy diet, using tobacco, drinking alcohol and not getting enough exercise are all related to, or direct drivers of obesity and diseases like diabetes and some cancers. What’s more confusing though, is that obesity itself puts us at higher risk for diabetes and certain cancers too, as does diabetes for heart diseases – for example.

Taking a step back though, the overlap becomes even more apparent. Because at a time when two-thirds of Australians, Mexicans, Americans and more are overweight or obese (and obesity is rapidly rising in even the poorest nations), this is not an issue that comes down to ‘stupid individuals making poor choices’. The reason we have a poor diet, or smoke, or don’t get enough exercise – is largely due to the built environment around us, the ubiquitous nature of junk-food and alcohol advertising, the way our cities are designed, the structuring of our food system, the subsidies that make unhealthy foods cheap, the over-focus of treatment at the expense of prevention in our health systems, the lack of integrated health education in schools and so on…

These are the structural and social determinants of health, and disease.

Let’s just look at food – which is a leading risk factor for disease worldwide with poor diet driving obesity, diabetes, heart disease, some cancers and more. We can say that people eat poor diets because of poor choices, but I don’t really buy this. Do we really make informed, un-coerced decisions on what we eat? We buy the chocolate bar because it’s delicious, but also because we are bombarded with advertising which makes us want it. They use behavioural studies to develop the right flavour, size and packaging. They place it at the check-out because they know we will impulse buy it – that is, we never really wanted it. The sugar in that bar is cheap because our governments (more so in the USA and Europe) subsidise the cost of sugar production and having eaten the bars as a child due to clever marketing specifically pointed at young people, we associate chocolate with happy memories.

My point is that in a nation where 2 in 3 of us are overweight or obese, something much bigger is going on that simply ‘stupid people making poor choices’.

My other point is that whilst we might think of these diseases as separated outcomes, they actually have common root causes, risk factors and social determminants. Many of them far beyond the health sector.

Some biting food for thought.

In the month of October, NCDFREE is running a campaign called The Face of NCDs Here are som e crowdsourced reflections on the overlaps between these diseases, from people like you around the world.

“The idea of NCDs as a result of broader social engineering, rather than from the intentions of individuals, is something that needs to be more widespread. Too much of our approach to conditions like diabetes, pulmonary disease, and heart attacks blames the sufferer when we should be looking to the societal and economic determinants of health. When two thirds of Australians are overweight, there have to be larger forces at work than the personal failings of patients.” – Oscar, Australia

“How ironic is it that man created antibiotics and medicines that keep us alive, but also created societal structures, alcohol, cigarettes and processed foods that are killing us? We need to realize that NCDs are problems of the way we constructed our societies and that there is a way out.” – Signe, Denmark

“In more and more countries being overweight or obese is the norm. Its the most shocking sign that our food system is simply failing. It’s going to take concerted effort from governments, the food industry and the public to make the changes needed to tackle this problem. Failure to do so will have catastrophic consequences for humanity.” – Henry, Denmark

“Coming from the US and living in Denmark has shown me the massive influence that political and public infrastructures have on health-related behavior. It can be argued that an unhealthy lifestyle is simply a matter of individual choice, but when roads are designed for automobiles rather than bicycles or when cheap, highly processed foods are available in excess rather than moderation, the odds are stacked up against you from the start.” – Hillary, USA

“Major sporting events often talk about leaving a legacy to inspire the youth of today to live a more physically active lifestyle. However these same events, which are watched by billions around the world, are sponsored by leading food and drinks companies which are contributing to the current global epidemic of obesity and type 2 diabetes. Is this the legacy we really want to leave?” – Jack, Denmark

This week’s post is in collaboration with the Canadian blog – Weighty Matters. Run by MD Yoni Freedhoff, theblog focuses on obesity and NCDs.

Alessandro R Demaio does not work for, consult to, own shares in or receive funding from any company or organisation that would benefit from this article, and has no relevant affiliations. 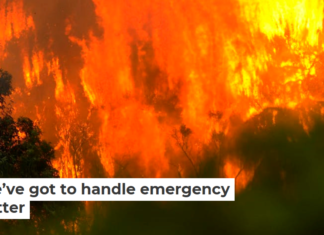 Next time, we’ve got to handle emergency donations better

Staff Writer - March 8, 2020
Debbie Wills, University of Tasmania As Australia burned over summer, many of us gave generously, donating an extraordinary A$500 million by mid-January. Charities had to scramble,...