By Michael B Friedman, Columbia University

For the most part, older adults are not using these drugs to get high. They are using them in the hopes of quelling pain, sleeplessness, anxiety, or depression. And they may also be given them to reduce dangerous, disruptive, or annoying behavior, especially among those older adults who have severe mental disorders, including dementia (often called, accurately or not, Alzheimer’s disease).

Overuse of medications that may be useful in the right dose for certain specific conditions creates a variety of serious problems including:

So what can be done to reduce the risk of misuse or abuse of medications by older adults? To some extent, misuse of medications results from the ignorance of older adults, their caregivers, and of those who prescribe medication for them about the appropriate use of medication. This includes ignorance about dosage, which is generally less for older adults than for younger people, the potential side-effects, the value of limiting prescriptions, alternative treatments and the dangers of using medication to control “difficult” behavior.

It is widely believed that better public education and professional training would result in significantly less misuse of medications.

Reducing abuse of prescription painkillers and other drugs has become a major item on the public health agenda in the United States. In part, public health officials have tried to educate patients and providers.

But in large part they have pressed for legal and regulatory constraints that discourage providers from prescribing these medications. The impact has been measurable but not remarkably high.

Overcoming medication misuse and abuse by older adults will not be easy because the problems these medications treat are serious and very troubling to those who have them. They want and need the drugs to avoid suffering and to be able to lead lives that they find at least tolerable.

The point is that we need a major push to help people with pain, sleeplessness and anxiety without excessive reliance on medications that are dangerous when they are misused, as they too often are. This will take far greater research to find effective alternatives to dangerous medications.

Michael B Friedman does not work for, consult to, own shares in or receive funding from any company or organisation that would benefit from this article, and has no relevant affiliations. 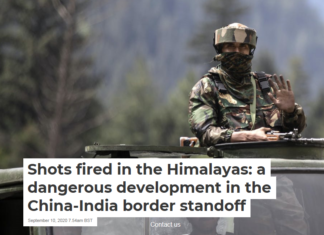 Staff Writer - September 22, 2020
Stephen Peter Westcott, Murdoch University In the midst of all the stories about China’s oppression in Hong Kong and Xinjiang and its expulsion of foreign...