Congress just missed one of its best shots at improving health when the Senate failed to advance a bill that would have raised the minimum wage to US$15 an hour. Study after study has linked higher income to better health.

Consider that a well-paying job, by definition, increases household income. That, in turn, means increased access to good nutrition, heat and a safe environment. It also means adequate health care. With that job, you’ll likely make more visits to primary care doctors, dentists and specialists who work in preventive care.

An inadequate income does none of these things. Instead, it increases susceptibility to psychological stress, malaise, illness and disease. This is one reason those who move off welfare benefits and gain employment improve their well-being.

I am not an economist. But I am a physician and public health scientist. I can tell you that research shows that a well-paying job translates to a longer life. For example, researchers in 2016 found that the richest 1% of men in the U.S. lived 14.6 years longer on average than the poorest 1% of men.

Numerous studies show employment is linked to self-esteem, purpose and identity. It provides relationships, social connections, social status and regular productive activity; a job is an integral part of a person’s identity. Its loss threatens that identity, which is why unemployment typically causes a decline in mental health. When compared with their employed counterparts, unemployed Americans are far more likely to receive a diagnosis of depression.

Which raises the question: Why not increase the minimum wage – at least enough to make it more than unemployment benefits? That way, more people would be motivated to seek jobs.

That may not happen soon, if at all. President Biden’s plan to raise the federal minimum wage to $15 per hour was not a part of the $1.9 trillion COVID-19 aid package. And it’s true there’s a downside: Raising the minimum wage can reduce the number of jobs available. A Congressional Budget Office estimate on Biden’s proposal says the raise would lift 900,000 people out of poverty, but it would also kill 1.4 million jobs over four years. https://www.youtube.com/embed/_M3vTvm2cfM?wmode=transparent&start=0 A brief history of the minimum wage.

That said, people who are fit to work should be encouraged to seek, not shun, employment. With unemployment benefits more than the basic minimum wage in many states, we are sending the wrong message to millions. There’s more to a higher minimum wage than just more money. It also means more happiness, better health and a longer life. 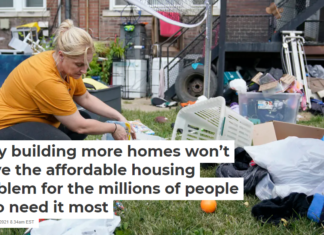 Hunger games: changing targets and the politics of global nutrition