Octopuses grow quickly, have lots of tasty flesh and are found all over the world. As the world’s supply of fish diminishes while the number of humans keeps increasing, it seems these creatures would make an ideal mass-produced food for our hungry mouths.

So where are all the octopus farms?

The main thing that prevents octopus farming at large scale is that the common octopus – Octopus vulgaris – is tough to feed in captivity, especially when first born.

After hatching, octopuses first exist as tiny organisms known as paralarvae, drifting around the upper ocean in among clouds of plankton which they feed on. It is this stage – before they become fully fledged young adults and descend further into the sea – which is hardest to replicate in aquaculture.

Feeding octopuses adequately during their first two months of life is a challenge. In this period, octopuses have highly selective feeding habits, and acceptable survival rates are hard to achieve.

At an industrial scale, the only possible solution is to take wild juveniles caught at sea and grow them in floating sea cages. Fishermen start with individuals of about 800 grams and grow them until they are more than 2-3kg, supplying them with crustaceans and low value fish over a period of three or four months.

Fishermen cooperatives in north-western Spain grow octopus in sea-cages. They sell them at high season – Christmas and summer – where large creatures can reach €10-12 per kilo, double the usual price. So far, research has allowed small-scale production by artisanal producers in Vigo, Galicia, reaching a production of just ten metric tons per year.

But this system is highly dependent on the success of the initial catches; without a good crop of smaller octopuses to grow in the cages, end results will always be limited. This is why farmed-raised octopus hasn’t had commercial success yet.

Over the past 15 years the Spanish Institute of Oceanography (IEO) in Vigo has carried out important and successful research to overcome the problems with octopus cultivation, and the institute is now focused on rearing octopus across a full life cycle – from hatch to catch. In fact they managed to complete full cultivation across the life cycle of several octopuses for the first time ever in 2001.

This experiment was achieved after using live crustacean larvae known as zoeae as prey along with the commonly used artemia, a brine shrimp. However, it is very difficult to obtain these zoeae in large quantities, making large-scale production prohibitively expensive.

So researchers are now focusing on analysing the biochemical composition of the larvae to find out what makes them tick – and what makes octopuses find them so tasty (or at least edible). Once identified, the idea is to ensure the cultured enriched artemia has the same features.

But once the octopus is up to a certain size, there is another step to be solved: the transition between paralarvae and juvenile. This stage is another mortality peak in octopus farms.

Working with other species that don’t have a paralarvae phase would help, such as the Mexican Four-Eyed Octopus – known scientifically as Octopus maya. Like cuttlefish, these octopuses hatch ready for the deep seas, with all the same features as their adult selves. There is still a transition phase of sorts though, when they still need commercial feed pellets to grow adequately.

Octopus maya cultivation represents the most advanced attempts at commercially sound cephalopod aquaculture. But even with this species, it has been necessary to rely on targeting a specialised gourmet-level market. In conclusion, the best octopus farms cannot yet compete directly with the common wild-captured product.

Developments in feeding products and techniques over the next few years will be key. Once small octopuses can be fed in large numbers, the development of a full undersea farming industry will be much easier.

José Iglesias Estévez does not work for, consult to, own shares in or receive funding from any company or organisation that would benefit from this article, and has no relevant affiliations. 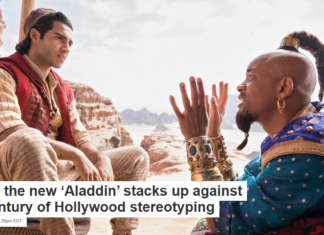 Staff Writer - May 26, 2019
Evelyn Alsultany, University of Southern California Though critically acclaimed and widely beloved, the 1992 animated “Aladdin” feature had some serious issues with stereotyping. Disney wanted to...