The Republican governor argued that the legislation would “solidify trust and confidence in the outcome of our elections by making it easier to vote and harder to cheat.” Democratic opponents of the measure, however, said Republican legislators presented no evidence of widespread voter fraud during debate on the bill.

Across the country, Republicans have turned to gerrymandering and voter suppression legislation such as closing polling stations in minority and low-income precincts, mandating discriminatory voter ID laws and purging millions from voter rolls. In addition, GOP politicians and right-wing commentators have demanded that educators quit teaching the facts of America’s racist history.

For several decades, the GOP has depended on racism to keep white people in power and nonwhites on the outside.

Lee Atwater and the strategy of racism

In 1981, longtime GOP strategist Lee Atwater plainly declared that the Republican Party’s key strategy was racism. Atwater described how the GOP began to define itself as a white supremacist party in response to the civil rights movement. The Nation magazine later published the full audio recording of the interview.

“Now, you’re talking about cutting taxes, and all these things you’re talking about are totally economic things, and a byproduct of them is, Blacks get hurt worse than whites,” Atwater explained. “‘We want to cut this’ is much more abstract than even the busing thing, uh, and a hell of a lot more abstract than ‘N—–, n—–.’” https://www.youtube.com/embed/X_8E3ENrKrQ?wmode=transparent&start=0 An excerpt from Lee Atwater’s 1981 interview explaining racist Republican tactics.

The GOP moves from overt racist words to coded words

In the early 1960s, U.S. Sen. Barry Goldwater of Arizona, a Republican, challenged the GOP’s more liberal politicians to redefine the Republican Party as what newspaper editor William Loeb called “the white man’s party.” Republican New York Gov. Nelson B. Rockefeller responded that if the GOP embraced Goldwater, an opponent of civil rights legislation, as its presidential candidate in 1964, then it would advance a “program based on racism and sectionalism.”

Goldwater won the GOP’s nomination but lost the presidential election in a landslide to the Democratic incumbent, Lyndon Johnson. But even without winning the Oval Office, Goldwater and other like-minded conservative Republicans won the hearts and minds of pro-segregation Democrats, who were angry with Johnson for signing the Civil Rights Act of 1964 and the Voting Rights Act of 1965.

The GOP, as Atwater pointed out, learned to use coded words to court these disillusioned Democrats who became Republicans in what would become known as the “great white switch” or Southern strategy.

Republican Richard Nixon won the 1968 presidential election in part by using references to states’ rights and “law and order,” rather than by making blatant appeals to white supremacy or racism. Nixon’s chief of staff, H.R. Haldeman, noted that Nixon “emphasized that you have to face the fact that the whole problem is really the Blacks. The key is to devise a system that recognized this while not appearing to.”

In 1980, former California Gov. Ronald Reagan, also a Republican, gave a presidential campaign speech at the Neshoba County Fair near Philadelphia, Mississippi, where three civil rights workers had been murdered in 1963. Reagan declared his own support for states’ rights. Gabrielle Bruney wrote in Esquire that “by touting himself as a states’ rights candidate near the site of one of the nation’s most famous hate crimes, Reagan offered voters a racism that was both obvious and unspoken.”

As president, Reagan used coded rhetoric to connect race to crime, welfare and government spending. For instance, Bryce Covert wrote in The New Republic, Reagan frequently used distortion in his references to a single con artist named Linda Taylor, the so-called “welfare queen,” to argue that welfare was corrupt and Black people were too lazy to work.

Atwater worked as a consultant for Reagan and then as campaign manager for Vice President George H.W. Bush’s presidential campaign in 1988. Atwater approved a television ad blaming Democratic presidential candidate Michael Dukakis, the former governor of Massachusetts, for a furlough program in the state that released a Black first-degree murderer, Willie Horton, who then raped a white woman. Atwater famously claimed, “By the time we’re finished, they’re going to wonder whether Willie Horton is Dukakis’ running mate.” Bush won the election.

The GOP’s hold on the South became complete in 2016 when Donald Trump won all the former Confederate states except Virginia.

Trump became one of the GOP’s top contenders for the 2012 presidential nomination after questioning without evidence whether Black president Barack Obama was born in Hawaii. When Obama released his birth certificate, Trump’s candidacy fell apart.

When Trump ran for president in 2016, he used racially divisive rhetoric, calling Mexican immigrants criminals and rapists, proposing a ban on all Muslims entering the U.S. and suggesting a judge should recuse himself from a case solely because of the judge’s Mexican heritage.

His campaign used the slogan “Make America Great Again,” which had been widely criticized for being a dog whistle to white people who felt that minorities were encroaching on their country. Then, as president, he pandered to white supremacists by refusing to criticize them and by using coded words. He told Americans that there are “fine people on both sides” after a confrontation between white supremacists and counterprotesters in Charlottesville, Virginia, on Aug. 12, 2017.

When Trump ran for reelection in 2020, he renewed his birther claim by insinuating that Democratic vice presidential candidate Sen. Kamala Harris, who is Black and Asian, “doesn’t meet the requirements” to run for vice president. When Trump lost the election, he challenged the accuracy of voting in precincts that were heavily minority.

Now Republicans in Texas and around the nation are back to openly expressing their racism with no need for dog whistling or other forms of abstraction. 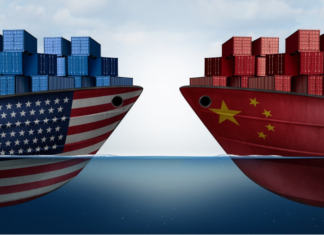 Staff Writer - April 15, 2018
Qing Shan Ding, University of Huddersfield Tensions are escalating between China and the US over trade. The Chinese government has announced retaliatory measures on a...