Amid an ongoing global food price crisis, vegetable oils are registering record-breaking highs. According to data compiled by the Food and Agriculture Organization of the United Nations, the price for edible oils rose to almost 250 per cent of standard price levels.

Over the past two years, labour restrictions, climate change and violent conflict have contributed to this latest oil crisis. As the COVID-19 pandemic spread rapidly across six continents, lockdowns resulted in work restrictions, affecting production sites and processing facilities in strategic locations such as Indonesia and Malaysia. These two countries are the top producers of palm oil, accounting for approximately 40 per cent of the vegetable oil market.

The other major commodities in this sector — soybean oil, canola oil and sunflower oil — fared even worse. A combination of heatwaves and droughts wiped out millions of tonnes in South America’s soybean harvest and decimated the canola harvest in Canada, which fell to a nine-year low.

In a catastrophic turn of events in Europe, the Russian invasion of Ukraine caused the price of sunflower oil to soar. When shipments of the important export crop came to a halt due to conflict-induced logistical bottlenecks in the supply chain, the market reacted instantly: futures contracts for sunflower oil suddenly swelled to US$2,361 from the previous year’s US$1,404 per tonne.

Given the market disruptions, commodity traders turned their attention back to palm oil, the cheapest and most abundant vegetable oil. Oil palm plantations yield an average of approximately three tonnes of oil per hectare each year, while other oil-producing crops generate less than one tonne of crude oil per hectare.

As the leading producer, Indonesia accounts for almost two-thirds of global palm oil exports. So, when Indonesian President Joko Widodo announced an unprecedented ban on palm oil exports in late April, he sent a shock wave across agri-food markets. What moved him to take such a radical step?

When the price of vegetable oils began to rise steeply, the Indonesian government scrambled to find effective domestic measures that would protect consumers. Policymakers initially decreed a price cap on palm oil and imposed a limit of two litres per customer as a rationing measure.

They later increased the levy on palm oil exports and offered direct cash transfers to low-income citizens to subsidize purchases of the staple food. None of their strategies solved the problem.

For palm oil producers, it is much more lucrative to sell their stock abroad instead of to the Indonesian market. The small group of businesses that control the country’s palm oil sector benefited financially from the high international prices for edible oils. By allocating more and more of their oil to the export market, they created a bottleneck in the domestic supply chain.

Public discontent grew in light of the administration’s inability to stabilize prices, unleashing a wave of protests in mid-April. The pressure escalated towards the end of the month. Eid al-Fitr, the Muslim celebration that marks the end of the month-long fasting during Ramadan, took place in the beginning of May this year.

Preparations for the festivities caused an upsurge in the demand of cooking oil in Indonesia. For the first time in two years of COVID-19 restrictions, people were hosting extravagant feasts. It was within this context that the Indonesian government ultimately decided to ban the export of crude and refined palm oil.

Implications around the world

Although the export ban temporarily quieted domestic critics, the rest of the world was bewildered by the new trade policy. Immediate repercussions were felt most strongly in populous nations that rely on the import of vegetable oils for their cooking needs, like India, Pakistan, Bangladesh and Egypt.

While North American and European consumers rarely use palm oil in their frying pans, they encounter refined, bleached and deodorized palm oil on a daily basis. It is a versatile ingredient used in processed foods and consumer goods including shower gel, dish soap, lipstick, cookies, instant noodles and packaged bread.

These, and other household goods, will likely be affected by the global vegetable oil crunch, but the impacts tend to be most dire for the world’s poorest regions.

From previous market disruptions, we know that rising food prices fuel harmful behaviours, ranging from panic purchases and commodity speculation, to an increased appetite for land acquisitions in the agri-food sector. This greatly affects low-income countries whose economies rely chiefly on agriculture and the export of primary goods. The majority of these nations are located in sub-Saharan Africa and South America.

Avoiding a spiral of adverse effects will require policy measures designed to keep excessive speculation in check. Enhancing transparency in the global food market requires prioritizing the needs of farmers and consumers rather than those who seek to profit financially from the vegetable oil price hikes.

The end of the Indonesian palm oil ban is an important first step to return the situation to normal. Three weeks after stopping exports, President Widodo has just reversed his decision in response to mounting pressures from palm oil producers. While this move may lead to new protests on the streets of Jakarta, it is good news for international markets in a tumultuous time. 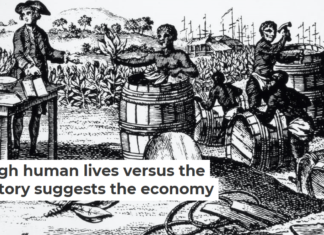 Staff Writer - May 3, 2020
Peter C. Mancall, University of Southern California – Dornsife College of Letters, Arts and Sciences Policymakers are beginning to decide how to reopen the American...