When Pope Francis framed climate change as a moral problem and issued a call to conscience, he played a powerful card. That’s because a moral argument trumps – that is, negates the power of – the usual, self-serving responses to a call for action on climate, like “reducing carbon emissions will cut into my profits” or “addressing climate change requires sacrifices.”

The fossil-fuel economy creates injustice on a global scale, the pope wrote in his recent Encyclical Laudato Si’, an authoritative statement of moral principle. It irredeemably harms the blameless – the poor, the children, plants and animals, future generations. And so, it is morally wrong. What does “wrong” mean?

As environmental philosophers, here’s what we think: It means you should wash your hands of it. That’s it. No excuses. From now on, those who want out of the obligation to do what’s right on climate will have to give reasons, reasons more powerful than moral principle. That may not be possible. The fossil-fuel economy now joins the slave economy as moral poison.

In the encyclical, Pope Francis played an entire hand of reasons why we must turn away from the greed-driven, extractive economy based on fossil fuels. It’s a brilliant display of science- and values-based reasoning.

First and repeatedly, he excoriates the injustice of global warming: “We can be silent witnesses to terrible injustices if we think that we can obtain significant benefits by making the rest of humanity, present and future, pay the extremely high costs of environmental deterioration.” He appeals to our love of children: “What kind of world do we want to leave to those who come after us?” He calls us to honor our duty to care for creation: “The natural environment is a collective good, the patrimony of all humanity, and the responsibility of everyone.” He speaks of the consequences of failing to act: “Our concern cannot be limited merely to the threat of extreme weather events, but must also extend to the catastrophic consequences of social unrest.” And he bluntly calls out greed and selfishness, urging God to “enlighten those who possess power and money, that they may avoid the sin of indifference.”

A life guided by a moral vision is a life of integrity, of wholeness, of consistency between what we believe to be true and just, and what we do.

From a commitment to integrity, at least two things follow, a refusal and an affirmation: First, we must refuse to allow ourselves to be made into agents of harm and destruction in the extractive economy’s war against the world. This requires acts of conscientious refusal, turning away from “the constant flood of consumer goods that can baffle the mind.” This requires finding, creating, insisting on our right to alternatives to fossil fuels and life-destroying practices.

Some of this is individual effort. The Pope calls these “little daily actions” and praises them. “We must not think that these efforts are not going to change the world. They benefit society, often unbeknownst to us, for they call forth a goodness which, albeit unseen, inevitably tends to spread.” But social problems must be addressed by social action, not by the sum of individual acts, and so we are called to create community networks of resistance and action. And we are called to press our leaders to fulfill their responsibilities.

Second, we must creatively and collectively re-imagine who we are, we human beings, and how we ought to live. In the dominant culture’s worldview of “tyrannical anthropocentrism,” we imagine ourselves to be essentially “masters, consumers, ruthless exploiters, unable to set limits on [our] immediate needs.” So it’s easy to imagine only a grey and dystopic future, peopled with walking zombies. But the pope has something far more beautiful in mind, something far more difficult to achieve. He calls it a “civilization of love.”

Imagine that the world has been given to us as a gift “which we have freely received and must share with others.” Then, “intergenerational solidarity is not an option, but rather a basic question of justice, since the world we have received also belongs to those who will follow us.” This changes everything. It allows us to begin the great work of “planning a sustainable and diversified agriculture, developing renewable and less polluting forms of energy, encouraging a more efficient use of energy, promoting a better management of marine and forest resources, and ensuring universal access to drinking water.” Let it begin. 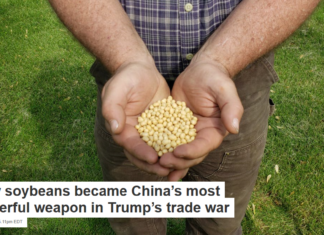 Staff Writer - May 30, 2019
Ian Sheldon, The Ohio State University Soybeans may not seem all that useful in a war. Nonetheless they’ve become China’s most important weapon in its...

From grandfather to grandson, the lessons of the Tulsa race massacre