In October 2018, a group of some 4,000 migrants set out en masse from Honduras, headed north toward the United States-Mexico border.

In the weeks that followed, an all-out panic over this “migrant caravan” gripped the U.S. political mainstream. Donald Trump’s administration painted the caravan as a Trojan Horse, teeming with traffickers, criminals and gang members. The spectacle of the caravan eventually gave way to that of the border itself, which daily throws up new horrors: harrowing images of migrant detainees crowded into squalid concentration camps, held in cages under freeway overpasses, drowned in the waters of the Rio Grande.

It can be easy to imagine that as Canadians, we have little direct stake in this drama. We are reassured in this thinking by recent reports declaring that Canada resettled more refugees than any other nation in 2018. Such accomplishments, we tell ourselves, make us mere observers of the humanitarian calamity currently unfolding at the U.S. southern border.

Never has it been more necessary to abandon this fantasy. Canada is centrally involved in the life-and-death struggle for migrant justice in the United States. Our foreign economic policies and domestic asylum laws are working in tandem with the U.S. and exposing asylum-seekers, particularly those from Latin America, to the worst excesses of a punitive American immigration system.

Though Canada is generally understood as a modest “middle power” whose foreign interventions are mostly limited to peacekeeping missions, the vast global reach of Canadian business and investment capital — particularly in mining — tells a different story.

As Pierre Bélanger, a Harvard mining researcher and landscape architect, shows, fully two-thirds of the world’s mining firms are currently incorporated in Canada, making our mining industry the largest in the world. Under Canadian law, these companies benefit from generous tax incentives, a favourable regulatory environment and easy access to the Toronto Stock Exchange, known as the TSX — among the globe’s leading commodities exchange markets.

Coupled with a foreign policy framework designed specifically to secure favourable investment conditions for Canadian capital abroad, these affordances have helped firms like Goldcorp (Newmont Goldcorp since January 2019), Barrick Gold and Teck extend their operations to almost all corners of the world.

But perhaps nowhere do they operate as intensively as in Latin America.

As of 2013, Canadian mining companies operated some 80 projects across the region, with nearly 50 more in the development or feasibility stage. In 2012, these operations, most of them in Mexico, Chile and Peru, generated more than US$19 billion in revenue.

This outsized presence has made Canada the third-largest investor in Latin America globally.

At the same time, it has made Canadian capital one of the most disruptive and belligerent forces in the region.

Consider the case of Honduras, where in the early 2000s, Canadian investment surpassed $100 million, much of it concentrated in mining and exploration. In response to popular discontent with the scale of these operations and their adverse environmental and public health effects, the centre-left President Manuel Zelaya proposed a series of modest checks on the industry following his election in 2005.

While these policies triggered a decline in foreign-direct investment, they were by no means catastrophic. All the same, the new policies elicited a strong response both among the Honduran elite and among those — like Canada — with a vested interest in the sustained growth of the mining sector.

Little surprise that when Zelaya was forced into exile during a 2009 military coup, the Canadian state threw its diplomatic weight behind his opponent, Porfirio (Pepe) Lobo,
who was widely expected to implement laws favourable to the mining sector. This despite his regime’s well-documented use of violent force against dissidents and journalists.

One need not support Zelaya to grasp how this cozy alliance between Canadian foreign investment policy, the interests of Canadian mining firms and the repressive activities of a dictatorship widely seen as illegitimate might conspire to drive Hondurans north by the thousands. This alliance, after all, has by many reports only intensified political repression and environmental degradation in the country.

Yet even as Canada contributes to the disruption of communities in Honduras and elsewhere in Latin America, it remains obstinate in restricting Latin American access to asylum protections. This is due in large part to Canadian Parliament’s failure to repeal the 2004 Safe Third Country Agreement (STCA).

Since 1969, Canada has been signatory to the United Nations Convention Relating to the Status of Refugees. Among other things, this framework commits Canada to accepting refugees who face threats of persecution, violence or repression in their home countries or in any other territory. It also mandates that we may only reject asylum claims if the claimant can be returned to some “safe” third country.

The STCA legally declared the United States one such country.

The agreement also specifies that Canada will only entertain asylum claims from those whose first point of arrival is a Canadian port of entry, and not some other place where they might safely file such a claim, like the United States.

Given the economic barriers that Latin American migrants face in securing uninterrupted passage to Canada, declaring the U.S. safe, in the words of the Canadian Council for Refugees, “closes the door on most refugee claimants presenting themselves at an official port of entry at the U.S.-Canada border: instead of being allowed to enter Canada to make a refugee claim, they are sent back to the U.S.”

Never a sound principle, in recent months the case for the United States as a safe third country has evaporated altogether.


No country where immigrant families so fear arrest that they hesitate to leave their homes is a safe one. No country where the detention of even those with documentation is routinely dismissed as
“collateral damage” is a safe one. And no country where asylum-seekers and even full citizens are corralled into camps as elected officials cobble together new ways to restrict the mobility of migrants abroad — conjuring yet more “safe third countries” into existence — can be called safe.

By refusing to repeal the STCA, even as it enables the displacement of communities across Latin America, the Canadian government implicates itself in these abuses.

We Canadians, then, are faced with a choice. We can continue to indulge the fantasy that we are peripheral to the fate of Latin American migrants in the United States. Or we can work to hold our government to account for how its policies, implemented in our name, chart a path for migrants that leads squarely to camps. 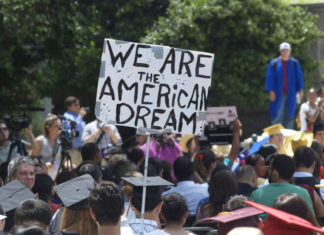 Staff Writer - November 19, 2014
By Noelle Witherspoon Arnold, University of Missouri In October 1965, the Immigration and Nationality Act was passed and introduced far-reaching changes to immigration policy in...

Why stories matter for children’s learning