It’s unclear when the pandemic will come to an end. What may be an even more important question is whether the U.S. will be prepared for the next one. The past year and a half suggests that the answer may be no.

As a medical anthropologist who has spent the past 20 years studying how the Chinese government reacts to infectious disease, my research can provide insight into how countries, including the U.S., can better prepare for disease outbreaks.

Researchers agree that a good response starts with a strong public health system. But this is something that has been sidelined by the United States’ neoliberal system, which places more value on free markets and deregulation than public welfare. https://www.youtube.com/embed/dzLv3rfnOVw?wmode=transparent&start=0 Neoliberalism promotes a free market accessible to the wealthy few, making essential services less free for everyone else.

Neoliberal economic policies became popular in the 1980s during the Reagan and Thatcher eras. This new approach aimed to make government leaner and more efficient through measures like market deregulation, privatization and reduction of government provision of public services like health and education – resources that do not necessarily lend themselves to market production.

While neoliberal governments still work to promote the health, welfare and security of their citizens, they place the responsibility of providing those services in the hands of private entities like health insurance companies and nongovernmental organizations. This gives the government space to focus on economic performance.

But placing responsibility for a public good into the hands of a private corporation turns that good into a commodity that people need to buy, rather than a service publicly available to all.

Spending on health care in the U.S., including on hospitals, medications and private insurance, has more than tripled in the past 60 years. But the public health system that helps the nation prepare for the unexpected has been neglected.

U.S. spending on the local health departments that help to avert epidemic outbreaks and protect the health of populations fell by 18% between 2010 and 2021. Two and a half cents of every medical dollar goes toward public health, a figure that has fallen from 1930 levels of 3.3 cents of every dollar. This has allowed the U.S. to manage health risks like chronic diseases that threaten individual’s health. But it leaves the nation inadequately prepared for population-level major health threats that have a much bigger effect on the economy and society.

Public health cuts left the U.S with a skeletal workforce to manage the pandemic. Because of this, responsibility fell to individuals. For example, without mandatory workplace COVID-19 safety guidelines, essential workers faced daily exposure to the coronavirus with insufficient to no protective gear and sanitizing supplies. They had to protect both their own health and the health of their families when they returned home, a difficult task without proper resources and support.

And this was not unique to the U.S. There were similar COVID-19 outcomes in other neoliberal countries like the U.K. and India that had shifted priorities away from public health.

How Asian nations learned their lessons

The story was different in many Asian nations where people enjoy the same types of individual liberties as those who live in neoliberal societies. The difference is a collectivist type of mindset that guides these societies and encourages people and government to take responsibility for one another. In her book Flexible Citizenship, anthropologist Aihwa Ong argues that this leads to a societal model where citizens can be independent and self-reliant while also able to rely on a state that supports the collective. Countries like Taiwan and South Korea may have been better prepared to respond to the pandemic because most people are accustomed to protecting themselves and their communities.

Like China, these countries also learned from their recent experience with a pandemic. In 2003, China and much of Asia were caught off guard with the emergence of SARS. Like the U.S., China’s public health system had taken a backseat to investment in market reforms for over 20 years. As a result, it couldn’t accurately track individual cases of infections.

Following the end of the SARS outbreak, however, the Chinese government improved training for public health professionals and developed one of the most sophisticated disease surveillance systems in the world. This allowed China to respond more quickly to the 2009 H1N1 pandemic and late 2019 COVID-19 outbreaks, once it was able to get past the initial bureaucratic and political hurdles that prevented local doctors and government officials from sounding the alarm.

Some have attributed this swift action to China’s authoritarian form of government that allows for greater control over individual lives. But prioritizing public health is not new to China. This became official practice as early as 1910 when it adopted the methods of quarantine, surveillance and masking to respond to an outbreak of pneumonic plague.

Could this work in the US?

Much like SARS did with China, COVID-19 has exposed huge holes in the American public health infrastructure.

Take for example contact tracing. SARS taught China and other affected countries the importance of a robust system to identify and track people who may have been exposed to the COVID-19 virus. The Chinese government sent more than 1,800 teams of scientific investigators to Wuhan to trace the virus, which helped their efforts to quickly bring the virus under control.

In the U.S., on the other hand, poorly funded and thinly staffed public health departments struggled to test and notify people who had been in direct contact with infected individuals. This crippled the U.S.‘s ability to prevent the spread of COVID-19.

In my home state of Massachusetts, the local government teamed up with the global health organization Partners in Health to start a contact tracing operation. But even then, people were left to fend for themselves. This became all the more evident as people scrambled for vaccines after their initial approval, through Facebook groups and informal volunteer networks that worked to help people secure appointments. Those who had resources learned how to take advantage of the system while others were overlooked.

This is typical of a U.S. health care system that is consumer-oriented and market-based. Americans are often convinced that the solution to a health problem must be technical and costly. The focus was placed on developing vaccines and therapeutics, which are essential for ending the pandemic, while ignoring lower-cost solutions.

But masking and social distancing – non-pharmaceutical interventions that have long been known to save lives during disease outbreaks – fell by the wayside. Uptake of these simple interventions is dependent on strong and coordinated public health messaging.

As seen in several Asian nations like Taiwan and South Korea, a well-thought-out plan for public health communication is key to a unified response. Without clear, coordinated directions from a public health system, it becomes difficult to prevent the spread of an outbreak.

What it takes to be prepared

Anthropologist Andrew Lakoff describes preparedness as more than just having the tools. It’s also about knowing how and when to use them, and keeping the public properly informed.

Such preparedness can only happen in a coordinated fashion organized by national leadership. But the U.S. has seen little of this over the past year and a half, leaving pandemic response up to individuals. In an era where emergent viruses are an increasing threat to health and welfare, the individualism of neoliberal policies is not enough. While neoliberalism can be good for an economy, it’s not so good for health. 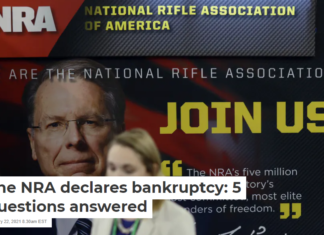 Should I stay or should I go: timing affects hurricane evacuation...