Considering how different they look from the outside, it might be surprising that all vertebrates – animals with a backbone – share the same, conserved set of organs. Chickens, fish, human beings – all have hearts, livers, brains, kidneys and so on. Each of these organs performs a specialized set of functions.

How these organs originated and evolved has been a tricky problem to study because of their very ancient origins. The organs we all share must have evolved sometime before the first vertebrates arose on Earth, more than 500 million years ago. And researchers know many of these organs first appeared even earlier. For instance, the nervous system may predate the most recent common ancestor of all animals; it’s been identified in invertebrate comb jellies, which split off from all other animals more than 600 million years ago.

To gain insight into how new organs come to be, my colleague and I decided to focus on one that’s more recently evolved – the placenta. It’s a complex organ that has evolved many times independently. In modern animals we see species with no placenta, species with a complex placenta and myriad species between these extremes. By investigating the evolution of the placenta, my colleague Günter Wagner and I identified several processes that appear fundamental to the evolution of all new organs.

In live-bearing animals, the placenta is the organ in the pregnant mother’s body that gives the unborn offspring the raw materials it needs to grow and develop. Made of both parental and embryonic tissue, it supports the exchange of nutrients and gasses between parent and developing embryo.

The first vertebrates, including early mammals, laid eggs and did not have placentas. But in the ancestor of marsupials and eutherian (formerly called placental) mammals, females evolved to hold their eggs inside the uterus until embryonic development was complete. For an embryo to be maintained inside the mother for the duration of pregnancy, it needs a placenta to supply it with oxygen and nutrients, and take away carbon dioxide and other waste products.

Placental structures have evolved to support pregnancy in most organisms that give birth to live young, totaling more than 100 independent origins across the animal kingdom. It didn’t happen out of the blue – but what are the steps that result in a new organ? Complex biological structures can evolve via simple changes that build up over time. The process depends on the fact that animals can acquire new body parts and body parts can acquire different functions over multiple generations through successive changes to a species’ DNA.

Placentas have evolved across animals in various ways, but always by repurposing existing tissues.

Lizards and snakes provide one example. Most of them lay eggs, but live birth has evolved in this group more than 100 times. In all of these cases, the mother retains the eggs in utero until the offspring are fully developed. In these reptiles, placentas form from the uterus and embryonic membranes that ancestrally lined the internal surface of the eggshell. That’s how it works in mammals (like us), too.

Live birth happens differently in amphibians and fishes. In guppies, eggs are fertilized and develop inside the ovary before they are ovulated and a placenta is formed from tissues in the ovaries. In seahorses, males develop a brood pouch on their abdomen and eggs are laid directly into this pouch. The placenta arises from the father’s belly skin tissue. In the marsupial frog, a pouch develops on the female’s back and a placenta forms from outgrowths of this back skin.

In each of these cases, placentas form when embryonic tissues come into contact with a parental tissue during development.

While placentas have evolved by repurposing existing body parts, sometimes we also see the evolution of entirely new biological structures within these old body parts. Seahorses’ broodpouches are one example, originating evolutionarily after eggs in an ancestor species attached to the underside of the parent’s belly. New specialized cell types can evolve, too, to perform new functions.

When tissues take on a new job

So in the case of the placenta, the evolution of a new organ involved repurposing existing tissues. These tissues had functions in the ancestor of the placental animal, some of which have been recruited to support the new organ functions.

One example of this is hormone production in embryonic membranes. In egg-laying terrestrial vertebrates, eggs are lined with a series of membranes. These embryonic membranes produce a diversity of hormones, which are likely important for the growth and development of the fetus. Following the evolution of live birth, the hormones were able to interact with maternal tissues, resulting in the evolution of fetal-maternal communication.

Prior research has shown that signaling between distinct tissues is typically how organ development is initiated in animals. We suspect that this signaling was important not just for the organ’s development, but for how it originated.

If a mutation results in tissues developing alongside each other in a new way, then the signaling dynamics inside these tissues are likely to affect each other’s development. This new signaling can then be an initiator for the development of a new organ.

We think the placenta is just one example of this phenomenon in action. This path may be a general way in which new organs arise in animals.

Placenta’s evolution as a case study

Our research suggests that new organs evolved by repurposing existing body parts. Over evolutionary time, organs can evolve new structures and new functions that increase the fitness or reproductive success of the animal. These changes result from genetic alterations that we can identify by comparing living animals.

An individual animal doesn’t all of a sudden have an organ that’s never been seen before. But small genetic changes happen all the time. As they accumulate, eventually, complex biological structures can evolve. Now we’re starting to identify specific types of genetic changes that allow for new complex organs to evolve inside animals. 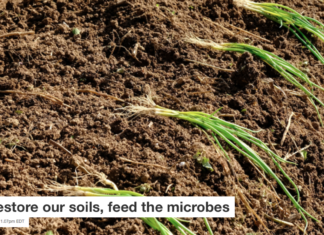 Staff Writer - July 29, 2017
Matthew Wallenstein, Colorado State University Our soils are in trouble. Over the past century, we’ve abused them with plowing, tilling and too much fertilizer. What...

Schools fall short when it comes to helping students in grief...