In the ancient Greek epic “The Odyssey,” Homer’s hero, Odysseus, describes the wild land of the Cyclops as a place where people don’t gather together in public, where each person makes decisions for their own family and “care nothing for one another.”

For Odysseus – and his audiences – these words mark the Cyclops and his people as inhuman. The passage also communicates how people should live: together, in cooperation, with concern for the common good.

Over the past year, we witnessed police violence, increasingly partisan politics and the continued American legacy of racism during a generation-defining pandemic. And for many, this was observed, at times, in isolation at home. I have worried about how we can heal from our collective trauma.

As a teacher of Greek literature, I am inclined to turn to the past to understand the present. I found solace in the Homeric epic “The Iliad” and its complex views about violence after the 9/11 attacks. And I found comfort in the Odyssey after my father’s unexpected death at 61, in 2011.

Similarly, Homer can help guide us as we return back to our normal worlds after a year of minimizing social contact. He can also, I believe, offer guidance on how people can heal.

When Odysseus, a Trojan war hero who returns home after 10 years, first appears in the epic, he is weeping on the shore of an isolated island, watched over by the goddess Calypso, whose name, meaning “one who hides,” further emphasizes his isolation and separation. To make it from this barren shore to his family hearth, Odysseus needs to risk his life at sea again. But, in the process, he also rediscovers who he is in the world by reuniting with his family and his home, Ithaca.

Conversation is central to its plot. While Odysseus’ arrival on Ithaca is packed with action – he dons a disguise, investigates crimes and murders wrongdoers – in reality, the epic’s second half unfolds slowly. And much of it proceeds through the conversations among the characters.

When Odysseus, disguised as a beggar, is given refuge by his unknowing servant, Eumaios, the two of them speak at length, telling true stories and false ones to reveal who they are. Eumaios invites Odysseus with the following words: “Let us take pleasure in our terrible pains: for after time a person finds joy even in pain, after they have wandered and suffered much.”

It might seem strange to think that recalling pain could give pleasure. But what “The Odyssey” shows us is the power of telling our stories. Pleasure comes from knowing pain is behind us, but it also comes from understanding where we fit in the world. This sense of belonging comes in part from other people knowing what we have experienced.

When Odysseus finally reunites with his wife, Penelope, after 20 years, they make love, but then Athena, Odysseus’ patron and goddess of wisdom and war, lengthens the night so they can take pleasure in telling each other everything they have suffered. The pleasure lies in the moments of sharing.

In this past year, I fantasized about moments of reunion as the pandemic dragged on. And I have returned to the reunion of Odysseus and Penelope, contemplating why this conversation is important and what function it serves.

Talk therapy has been an important part of psychology for a century, but conversation and storytelling shape people all the time. The modern psychological approach of narrative therapy as pioneered by psychotherapists Michael White and David Epston can help us understand this better.

Narrative therapy argues that so much of what we suffer emotionally and psychologically comes from the stories we believe about our place in the world and our ability to influence it. White shows how addiction, mental illness or trauma prevents some people from returning to their lives. Narrative therapy can help in these situations and others. It has people retell their own stories until they understand them differently. Once people can reframe who they were in the past, they can have a better chance of charting their course in the future.

“The Odyssey,” I believe, is aware of this too. As I argue in my recent book, “The Many-Minded Man,” Odysseus has to tell his own story to articulate for himself and his audiences his experiences and how they changed him.

It takes Odysseus one long evening but four books of poetry to tell the story of his journey, focusing especially on the decisions he made and the pain he and his men suffered. Recasting the past and understanding his place in it, prepares the hero to face the future. When Odysseus retells his own story, he traces his suffering to the moment he blinded the one-eyed giant Polyphemos and bragged about it.

By centering his own action at the beginning of his tale, Odysseus rearms himself with a sense of control – the hope that he can shape the events still to come.

Returning to the world

There’s an important echo here of ideas found elsewhere in Greek poetry: We need doctors for ailments of the body and conversation for sickness in the soul.

After the past year, some of us may find it hard to express optimism. Indeed, I’ve been through this bleakness in my own life when I had to attend a virtual funeral for my grandmother last year and felt that we were not properly honoring our dead. But this spring, as we welcomed our third child into the world, my story shifted to one of hope when I looked into her eyes.

At this moment, I believe that, like Odysseus, we need to take the time to tell each other our stories and listen in turn. If we can communicate what happened to us during this past year, we can better understand what we need, to move toward a better future. 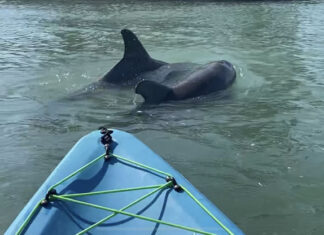 How deadly landslides can now be predicted using fibre optic...