In case you’ve forgotten the section on the food web from high school biology, here’s a quick refresher.

Plants make up the base of every food chain of the food web (also called the food cycle). Plants use available sunlight to convert water from the soil and carbon dioxide from the air into glucose, which gives them the energy they need to live. Unlike plants, animals can’t synthesize their own food. They survive by eating plants or other animals.

Clearly, animals eat plants. What’s not so clear from this picture is that plants also eat animals. They thrive on them, in fact (just Google “fish emulsion”). In my new book, “A Critique of the Moral Defense of Vegetarianism,” I call it the transitivity of eating. And I argue that this means one can’t be a vegetarian.

I’ll pause to let the collective yowls of both biologists and (erstwhile) vegetarians subside.

Take the well-worn trope “you are what you eat.” Let’s say instead that we are “who” we eat. This makes the claim more personal and also implies that the beings who we make our food aren’t just things.

Plants acquire nutrients from the soil, which is composed, among other things, of decayed plant and animal remains. So even those who assume they subsist solely on a plant-based diet actually eat animal remains as well.

This is why it’s impossible to be a vegetarian.

For the record, I’ve been a “vegetarian” for about 20 years and nearly “vegan” for six. I’m not opposed to these eating practices. That isn’t my point. But I do think that many “vegetarians” and “vegans” could stand to pay closer attention to the experiences of the beings who we make our food.

For example, many vegetarians cite the sentience of animals as a reason to abstain from eating them. But there’s good reason to believe that plants are sentient, too. In other words, they’re acutely aware of and responsive to their surroundings, and they respond, in kind, to both pleasant and unpleasant experiences.

Check out the work of plant scientists Anthony Trewavas, Stefano Mancuso, Daniel Chamowitz and František Baluška if you don’t believe me. They’ve shown that plants share our five senses – and have something like 20 more. They have a hormonal information-processing system that’s homologous to animals’ neural network. They exhibit clear signs of self-awareness and intentionality. And they can even learn and teach.

It’s also important to be aware that “vegetarianism” and “veganism” aren’t always eco-friendly. Look no further than the carbon footprint of your morning coffee, or how much water is required to produce the almonds you enjoy as an afternoon snack.

A word for the skeptics

I suspect how some biologists may respond: first, plants don’t actually eat since eating involves the ingestion – via chewing and swallowing – of other life forms. Second, while it’s true that plants absorb nutrients from the soil and that these nutrients could have come from animals, they’re strictly inorganic: nitrogen, potassium, phosphorus and trace amounts of other elements. They’re the constituents of recycled minerals, devoid of any vestiges of animality.

As for the first concern, maybe it would help if I said that both plants and animals take in, consume or make use of, rather than using the word “eat.” I guess I’m just not picky about how I conceptualize what eating entails. The point is that plants ingest carbon dioxide, sunlight, water and minerals that are then used to build and sustain their bodies. Plants consume inasmuch as they produce, and they aren’t the least bit particular about the origins of the minerals they acquire.

With respect to the second concern, why should it matter that the nutrients drawn by plants from animals are inorganic? The point is that they once played in essential role in facilitating animals’ lives. Are we who we eat only if we take in organic matter from the beings who become our food? I confess that I don’t understand why this should be. Privileging organic matter strikes me as a biologist’s bias.

Then there’s the argument that mineral recycling cleanses the nutrients of their animality. This is a contentious claim, and I don’t think this is a fact of the matter. It goes to the core of the way we view our relationship with our food. You could say that there are spiritual issues at stake here, not just matters of biochemistry.

Changing how we view our food

Let’s view our relationship with our food in a different way: by taking into account the fact that we’re part of a community of living beings – plant and animal – who inhabit the place that we make our home.

From this perspective, what the self-proclaimed “farmosopher” Glenn Albrecht calls sumbiotarianism (from the Greek word sumbioun, to live together) has clear advantages.

Sumbioculture is a form of permaculture, or sustainable agriculture. It’s an organic and biodynamic way of farming that’s consistent with the health of entire ecosystems.

Sumbiotarians eat in harmony with their ecosystem. So they embody, literally, the idea that the well-being of our food – hence, our own well-being – is a function of the health of the land.

In order for our needs to be met, the needs and interests of the land must come first. And in areas where it’s prohibitively difficult to acquire the essential fats that we need from pressed oils alone, this may include forms of animal use – for meat, manure and so forth.

Simply put, living sustainably in such an area – whether it’s New England or the Australian Outback – may well entail relying on animals for food, at least in a limited way.

All life is bound together in a complex web of interdependent relationships among individuals, species and entire ecosystems. Each of us borrows, uses and returns nutrients. This cycle is what permits life to continue. Rich, black soil is so fertile because it’s chock full of the composted remains of the dead along with the waste of the living.

Indeed, it’s not uncommon for indigenous peoples to identify veneration of their ancestors and of their ancestral land with the celebration of the life-giving character of the earth. Consider this from cultural ecologist and Indigenous scholar-activist Melissa Nelson:

The bones of our ancestors have become the soil, the soil grows our food, the food nourishes our bodies, and we become one, literally and metaphorically, with our homelands and territories.

You’re welcome to disagree with me, of course. But it’s worth noting that what I propose has conceptual roots that may be as old as humanity itself. It’s probably worth taking some time to digest this. 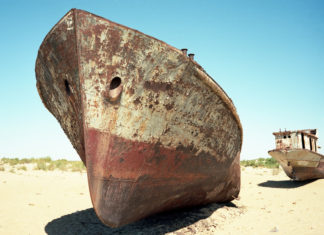