By Laurence Murphy, University of Salford

There has been a lot of hype and misinformation in the press over the last few weeks about the future of television. At the CES Electronics Showin Las Vegas, curved screens and 4K TV are being touted as the next big thing for your living room. Despite the confusion, this might just be true. For 4K TV is the next key technology which will gain a foothold in high-end media distribution and the best way to enjoy it is on a curved screen.

Why do we need more than HD?

The advent of HD TV was greeted with great excitement but the reality hasn’t quite met expectations. HD needs to be viewed from an optimum distance for your eyes to adequately perceive the resolution. Three times the picture height is the ideal distance, which unfortunately that means if you have a TV of more than 40 inches you need to sit at the other end of the room to enjoy your programme. If you sit any closer, you can see the pixels that make up the picture and the effect is ruined.

But, if you increase the number of pixels, you can sit comfortably closer to the screen. That’s the biggest benefit of 4K TV. You won’t have to buy a bigger house to enjoy it.

We can just about use a 40” TV see HD and not sit in the garden to perceive it. The new 4K TVs being shown at CES this week range in size from 55” to 105”, some with curved or flexible screens. But because we can sit considerably closer to a 4K TV these large screens will work in even smaller lounges.

Another significant reason that 4K is being explored and promoted by manufacturers is the failure of 3D television transmission.

3D emerged a few years ago with a level of hype that put HD to shame. But the disappointment was even greater. Many of the broadcast companies that offered 3D in the home have subsequently dropped the service because their customers just weren’t interested in it. This lacklustre response boils down to the fact that no one likes the glasses you have to wear to experience 3D TV or the insular viewing experience it promotes. There was also a lack of broadcast 3D content.

Some of the Winter Olympics in Sochi are being shot in 4K but the World Cup in Brazil is the largest planned event that will be shot in Full HD Full and 4K, not 3D. Sky has been doing tests on its satellites for live 4K transmission but has not yet confirmed or denied rumours it may offer a 4K service over the period of the World Cup.

Netflix is on the record with its plans though. The online broadcast service has been busy re-editing popular series to be distributed over its network and plans to distribute the final season of Breaking Bad and the second series of House of Cards in 4K in 2014.

Other companies such as Amazon, RED, Sony, HBO and Apple also intend to create 4K media distribution for online and TV distribution over 2014 and 2015.

Why have a curved screen?

Samsung launched a range of curved screens at CES this week and has everyone wondering if they should be saving up to get one. The idea of curved screen is to focus the angle at which the viewer receives the image to enhance their experience.

If a viewer can comfortably sit closer to 4K TV screen than they can and HD screen, a curve can complement the best angle at which they view it. Or at least, that’s the theory.

But there is a worry here. A curved screen creates a prescribed viewing zone for the screen and if you aren’t in the right spot, the image is inferior. This was a key problem with 3D TV techniques – if you sit in the wrong place, there is no 3D effect. Samsung will need to learn from the mistakes of 3D to make this offering work.

They have clearly thought about another big problem though. A big disadvantage to a curved screen is that we like our flat TVs to sit flush against our wall. That’s where flexible screens come in. Samsung and LG have both created designs that can reshape from a flat panel to a curved screen at the touch of a button.

Flexible screens have been a pet project for both companies for years and they have finally decided to use it in TV. But they also have their sites set on the mobile market. LG, Samsung and other handset manufactures are developing curved handsets for launch, possibly as early as this year.

How successful curved screens will be remains to be seen. They will sell at a premium price over the flat 4K alternatives so many just might opt for the cheaper version, which won’t be all that cheap themselves.

Nevertheless, 4K TV is the big story in consumer technology this year, with or without curved screens. We can expect to see the technology move pretty quickly as 8K is already on the horizon and could be broadcasting into our homes within the next decade.

Laurence Murphy does not work for, consult to, own shares in or receive funding from any company or organisation that would benefit from this article, and has no relevant affiliations. 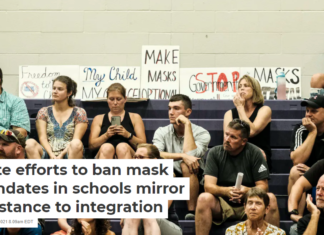 Staff Writer - September 1, 2021
Dustin Hornbeck, University of Texas Arlington When the U.S. Supreme Court issued its 1954 Brown vs. Board of Education...