You’ve probably got the fruits of this year’s Nobel laureates’ handiwork in your pocket. In fact, if you’re reading this on your phone or a relatively recent flat-screen monitor, you’re more than likely staring at some of them right now.

The 2014 Nobel Prize in physics has been awarded to Isamu Akasaki, Hiroshi Amano and Shuji Nakamura for their pioneering work on blue LEDs, or light-emitting diodes. Blue LEDs are important for two reasons: first, the blue light has specific applications of its own and second, because it’s a vital component of the white light which makes white LEDs, and therefore LED computer and phone screens, possible.

A flash of inspiration

So, what is an LED? Fundamentally, the simplest LEDs are two pieces of a semiconductor material sandwiched together. Semiconductors, as their name suggests, are materials which don’t conduct electricity all that well.

This property might seem to demarcate them as thoroughly unremarkable, but in fact this propensity for unimpressive transmission of electrical currents has a huge advantage to technologists: its flexibility. If you take a semiconductor – silicon, for example – and mix in tiny amounts of impurities during manufacture, you can radically alter its electrical properties.

A p-type semiconductor is the opposite: you add a chemical element which has a deficiency of electrons compared to the semiconductor around it, and you end up with an excess of “holes” – missing electrons, stolen from the semiconductor by the impurities you’ve added. (Counter-intuitively, this also increases the conductivity, because these holes can carry current too!) But it’s when you stick n-type and p-type together that the real magic happens.

Pass a current through your newly-manufactured p–n junction, and the electrons flow from the n-type material into the p-type, whereupon they promptly fall into the holes. As they plummet, they give off a tiny flash of light.

The colour of that light is determined by the semiconductor you’ve used. Silicon, for example, while great for computer chips, isn’t so brilliant for lighting. Light emitted by a silicon LED would be deep into the infra-red range, and invisible to the human eye. Infra-red LEDs are nonetheless very useful: they’re how your remote control allows you to zap instructions to your TV from your sofa. But even here, silicon isn’t used because for quite subtle reasons it’s a very inefficient infra-red light source.

So, if you want to manufacture an LED which emits a certain colour of light, you just need to find a material which has the right properties to give off the colour of light you’re interested in. In some cases this turns out to be quite simple. Red LEDs were available from the early 1960s, using materials based on gallium arsenide. Green LEDs followed shortly thereafter using gallium phosphide. However, blue proved something of a challenge. The first commercially available blue LEDs came onto the market in 1989 and were based on silicon carbide but, much like pure silicon, they were phenomenally inefficient.

This is where our Nobel laureates step in. A better choice for producing blue light is gallium nitride (as you’ve probably noticed, gallium something-ide is where it’s at when it comes to making light from electricity). Unfortunately, it’s far trickier to coax bright light from this than the other gallium compounds.

First, it proved very hard to grow high-quality crystals of gallium nitride. Typically, it’s easiest to grow a crystal on a surface which has a similar crystal structure, but gallium nitride’s complex atomic layout makes that somewhat challenging. Then, making the LEDs more efficient requires a complex layering of even more materials, deviating somewhat from the idealised p–n junction LED we just met. Varying widths of the layers in this quantum sandwich can even alter the exact colour of light emitted (theoretically these “blue” LEDs could be tweaked to emit green, yellow or even orange light).

From blue to white

In spite of their complex manufacture, blue LEDs are now ubiquitous. For example, they can be found inside Blu-ray players. Blue light has a short wavelength, which allows the pits on a Blu-ray disc to be smaller and closer together than on a DVD, which is read with red light. This means that we can pack over five times as much data onto a disk the same size as a DVD.

Their biggest impact, however, is surely in giving us the ability to produce white LEDs. White light is actually a mixture of all the colours of the rainbow, as you can see if you split it up with a prism, or indeed if you catch a multicoloured reflection in the surface of a Blu-ray disc, DVD or CD. However, the human eye has just three types of colour receptor inside it: red, green and blue.

We can therefore make something which looks like white light using only these three colours. Combining red and green LEDs with blue ones allows us to create highly efficient white lighting, providing around 20 times as much light as an equivalent incandescent bulb. White LEDs are slowly making their way onto ceilings of homes, shops and factories around the world, but their real ubiquity today is as the back-light for computer and phone screens. Unlock your phone or turn on a recent flat-screen monitor, and red, green and blue LEDs shining through a layer of liquid crystal allows you to browse the web, watch movies, and even read this article.

As well as being a technological marvel, Akasaki, Amano and Nakamura’s Nobel Prize is a testament to tenacity in experimental science. As much as deft theoretical insight, the development of blue LEDs required hours of trial and error in the lab, performing the same procedures under subtly different conditions, trying to maximise the efficiency and cost-effectiveness of this finicky process.

The result is a technology which is all around us in the developed world, and making headway into the developing world too. These laureates’ bright idea could well be the light source of the 21st century and, when the movie version comes out, we can even watch their story on Blu-ray on an LED-backlit TV.

Andrew Steele does not work for, consult to, own shares in or receive funding from any company or organisation that would benefit from this article, and has no relevant affiliations. 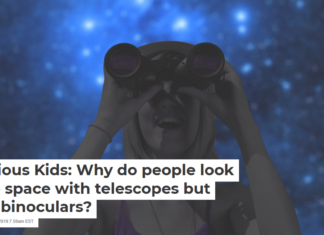 Staff Writer - November 14, 2019
Silas Laycock, University of Massachusetts Lowell Curious Kids is a series for children of all ages. If you have a question you’d like an expert...

When will we have better batteries than lithium-ion for gadgets and...