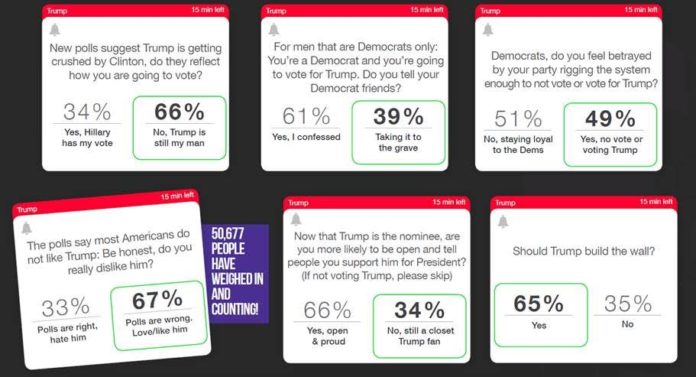 Before launching the Zip App in September of 2015, founder and CEO Ric Militi, was in the marketing business. He started his first agency in Los Angeles when he was 32-years-old, specializing in advertising for the entertainment industry. While at a meeting with his tech team, he got into a debate with a colleague: ‘Is Australia perceived more as strictly a continent, or both an island and a continent?’

“After much debate we did what everyone does: we asked the people around us to weigh-in and try to settle our debate with consensus. Basically asking our fellow employees, ‘Do you think I’m right or her?’ Because they were put on the spot, they chose not to take sides. So still not satisfied, I said, ‘Will someone pull up an app that I can ask this question to and list our opposing views and people can weigh-in?’

It was never meant to be a political poll but has proved to be a unique—and different—way of judging this year’s presidential election. With results differing from 99% of traditional mainstream polls.”

Life&News sat down with Militi to discuss how his app may be laying waste to traditional polling—and predicting perhaps the biggest upset in the history of American politics.

How many users do you currently have?

Because we are actively speaking to investors we cannot release the user count, but we can tell you we get over 2.5 million engagements per week in the form of answers to user questions.

Zip wasn’t intended to be a political poll, but what have you noticed or seen in the last year or so when it comes to people discussing politics on the app?

Because Zip – The Question Answer App is a social platform its primary function is to allow its users to share their opinions anonymously on the hot topics of the day. Certainly the race for the White House qualifies as perhaps one of the nation’s most polarizing and heated debates in U.S. history. As a result of the race and the conversation on Zip surrounding it, we’re proving Zip is serving its function as the social platform it was built to be.

“It is not inconceivable that a reverse Bradley Effect could be in play for Trump combined with the Bradley Effect for Clinton. It certainly seems this is the cycle and time for such a phenomenon given the outcome of Brexit, which the users of Zip accurately predicted.” —Ric Militi

I know Trump is down in almost all the polls. How is he faring on Zip?

He is showing strong support in the Zip community under the protection of anonymity, and we’ve seen questions from users phrased in all different ways that are trending with breaking news to reflect the latest developments in the campaign for president. Overall, Zip is a measure of public opinion that is constantly evolving and applicable to all different categories. All of our questions are user generated and can only be voted on once by each person.

Do you think there could be a sort of reverse Bradley effect going on here?

It is not inconceivable that a reverse Bradley Effect could be in play for Trump combined with the Bradley Effect for Clinton. It certainly seems this is the cycle and time for such a phenomenon given the outcome of Brexit, which the users of Zip accurately predicted.

The anonymity factor of Zip is perhaps our greatest and best feature and unique selling proposition respectively. The anonymity factor allows Zip users to engage with the platform and ask and answer questions without fear of retaliation, repercussions, bullying and judgement—something no other platform does. The anonymity makes us unique and the responses we get from users highly truthful. 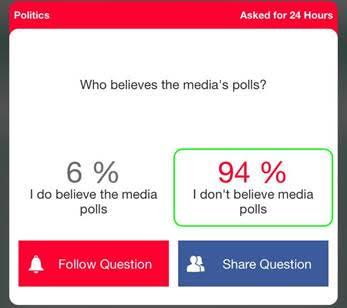 Could this be the future of polling?

Because the features of Zip allow its users to ask and answer questions in a safe environment free from fear of repercussion it plays into the favor of any issue that is highly controversial and passionate such as the presidential election. As a result we may be seeing answers regarding Trump being answered more truthfully. I must add though that since the national coverage regarding our findings prior to Saturday, August 13th, 2016, we have seen an influx of what appears to be Trump supporters.

This is most likely explained by the fact Trump supporters are seeking a safe environment to express their opinions in. We would like to see the balance change back to a more equal disbursement of political views and are working on ways to do that fairly and organically. Although what appears to be a more conservative group of Zip users have recently adopted the platform, this does not affect the outcome of results in the other 28 categories we have, but it absolutely sways the political outcomes, which is why we are asking and welcoming people with opposing views to become users and express their opinions.

Is there anyway for you to quantify if the Zip community will vote?

Yes, we can identify users in clusters of age, gender and geography, therefore we can funnel anonymous answers from users into specific categories.

Are you able to know what the demographics are of Zip users?

All of our users are within the US and stretch across all 50 states. Everyone on the app is over 13 and the average user age is 35, with a slight skew towards men in the gender breakdown. Political affiliation and other psychographics can be assessed in aggregate per question. Overall, we are tending to skew more conservative as explained earlier but no particular demographic or otherwise groups were targeted in our marketing efforts to obtain users. Minimal Facebook advertising using an unbiased video produced by CBS8 in San Diego emphasizing the social applications of Zip motivated the vast majority of our downloads, along with some national press coverage in recent weeks.

Finally, judging from what you have seen in the national polls and what you are seeing on Zip, if you were a betting man who would you place your bet on right now?

I’d say there is tremendous distrust in all polls. This we know for sure from our data.

Outsider art can refashion how we think about mental illness

The US just set ambitious offshore wind power targets – what will it take to meet them?

Why winter solstice matters around the world: 4 essential reads

In divided Alaska, the choice is between paying for government or giving residents bigger...