More than a century after it was “lost”, the New Guinea big-eared bat has been discovered by Queensland researchers working in Papua New Guinea’s forests. The critically endangered bat was thought to be extinct, and the discovery shows there is still much to learn about biodiversity in our region.

On July 25, 2012, Catherine Hughes and Julie Broken-Brow caught a small, female bat in a trap at the edge of a forest in southeast Papua New Guinea (PNG). But the bat didn’t match any species known to exist. And so began a fascinating detective story about a species that hadn’t been spotted for more than 120 years.

The land of the microbats

As part of a fauna survey, Catherine and Julie ventured into the lowland forests 200 km southeast of Port Moresby, in a region known as the Cloudy Bay Forest Management Area. The survey was part of a University of Queensland study, carried out with the permission of local landowners and sponsored by Cloudy Bay Sustainable Forestry Ltd, which manages the area.

One aim of the project was to determine how small, insectivorous bats — known as “microbats” — respond to sustainably harvested forests over time. Not enough is known about the biology of microbats throughout the world, and particularly in PNG.

One of the most common methods for surveying them is by acoustic detection, which involves recording their ultrasonic echolocation calls. Every microbat species has a unique call, which can be used to identify the species – as long as you know what its call is like.

We were attempting to collate a reference library of the echolocation calls for microbat species in this area of PNG. We did this by trapping as many different microbats as possible, identifying them and then recording their calls when we released them.

Return of the lost bat

When Catherine and Julie captured their bat, on the edge of logged forest near an old coconut plantation now covered with grassland, they thought it was either the small-toothed nyctophilus (Nyctophilus microdon) or a Pharotis – the genus to which the New Guinea big-eared bat belongs.

The trap that caught the bat was only at the site for two nights, making this discovery particularly lucky.

The bat was ethically euthanized and taken to the PNG National Museum and Art Gallery in Port Moresby. Specimens like this are an important reference for future research, and also a good way to identify species whose identity cannot be confirmed in the field.

In March 2014 the bat was loaned to the Australian Museum in Sydney, where researcher Harry Parnaby identified it as Pharotis imogene – the New Guinea big-eared bat.

Missing for a whole century

It is the first record of the species since 1890 – meaning that this bat was missing in action for the entire 20th century.

Measurements of the new specimen are consistent with those of the first specimens collected in 1890 from a coastal village called Kamali, 120 km west of our study site.

The New Guinea big-eared bat, like the rest of the genera Pharotis and Nyctophilus, is distinguished by a combination of two features: large ears and a simple “nose-leaf” structure immediately behind the nostrils. Collectively, the group of species is known as long-eared (or big-eared) bats. P. imogene has larger ears than most.

It is very rare to recapture a species after more than 120 years. This discovery also extends the known range of the species in PNG’s Central Province by around 120 km to the east.

Its current status on the IUCN Red List is Critically Endangered (possibly extinct) – the good news is that this discovery confirms that it’s not extinct. It is also listed in the top 100 of the world’s most unique and endangered mammals.

While this rediscovery may not change the critically endangered status of the species, confirming the species current existence is still valuable for its conservation. This means that a recent capture location can be used to target the species for ecological studies.

Nothing is known of the ecology of New Guinea big-eared bat, and therefore more surveys are needed in the coastal lowland rainforests of southern PNG. Many lowland rainforest habitats are being disturbed by timber logging (both sustainable and otherwise), clearing for development, and agriculture. The effect of these disturbances on the bat is unknown; however if the species is found in low numbers, it may be threatened by local disturbances.

PNG is one of the world’s biodiversity hotspots. The country accounts for about 7% of the world’s species diversity, with about 276 known mammal species, 314 freshwater fish, 641 amphibian and reptile species, 740 birds, and many more. According to the World Wildlife Fund, between 1998 and 2008, 1060 new species were discovered, including a blue-eyed spotted cuscus, a 2.5 metre freshwater shark, and a giant bent-toed gecko.

In 2013, a rapid biodiversity survey conducted by the Wildlife Conservation Society in a remote location of PNG (Hindenburg Wall) discovered at least 89 new plant and animal species. These surveys show that PNG’s biodiversity numbers will continue to grow as we survey more of the country.

Yet at the same time, major losses to PNG’s biodiversity are being caused by rapid human population growth, forest degradation by illegal logging and trading, the establishment of plantations (palm oil, coconut, coffee), mining and forestry, and climate change. While our team are delighted with rediscovering this bat from extinction, we are still saddened by the plight of other animals such as the Bramble Cay melomys in nearby Torres Strait.

Who knows what other species are out there? If we’re not careful, they might be gone before we can find them.

This article was co-authored by Catherine Hughes. The New Guinea big-eared bat was rediscovered as part of her Honours project at the University of Queensland. 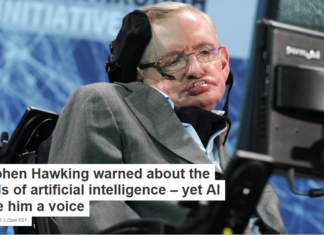 Staff Writer - March 15, 2018
Ana Santos Rutschman, DePaul University The late Stephen Hawking was a major voice in the debate about how humanity can benefit from artificial intelligence. Hawking...